Clinical infections often start as interactions between microbes and host cells/tissues. We describe how a bacterial metal transporter enables GBS survival within macrophages allowing for macrophage enabled dissemination on the way towards perinatal infection and preterm birth.
Ryan Doster
Assistant Professor, University of Louisville
Follow
Like Liked by Sorrel Bunting
0

Young infants are vulnerable to all sorts of infectious agents, but often the impact of infections during pregnancy is under-appreciated. Infections that start in utero can be insidious, and the mother may not have any overt signs of infection prior to preterm labor or delivery. During pregnancy, the maternal immune system has the difficult task of balancing the need to provide protection for the mother against pathogens with modulating inflammatory responses to maintain the developing pregnancy. Too much or too little inflammation can lead to preterm birth or other perinatal adverse events. [1, 2] Preterm birth remains a major problem both in the U.S. (where preterm birth rates are >10%) and in the developing world. [3] Consequences of being born too soon not only affect the infant during childhood, but can also lead to lasting health consequences and result in higher risk for a myriad of diseases later in life (Developmental Origins of Health and Disease). [4, 5]

Streptococcus agalactiae, also called Group B Streptococcus (GBS), is a common perinatal pathogen. GBS rarely affects healthy children or adults, but can cause infections in the very young, the elderly, or those with immunocompromising conditions (similar to many other pathogens). GBS has a special niche to cause infections during pregnancy. Since the 1970’s, when GBS was recognized as a common cause of perinatal infections, researchers have been trying to understand why and how GBS causes infections that lead to severe morbidity and mortality in mothers and infants. [6]

Our collaborative research group has been interested in how interactions between GBS and different cells within the female reproductive tract could lead to clinical disease. Our group has a particular interest in macrophages. Macrophages are multifunctional cells that perform numerous roles that are often tissue specific. Macrophages function along an inflammatory spectrum (polarization), where depending on the cellular signals they receive, they contribute to functions from fighting infections to assisting with tissue remodeling. The multifunctional nature of macrophages is particularly evident within the reproductive tract and during pregnancy, as they are important for normal growth and development of the placenta and fetus from implantation to delivery. [7-9]

As we investigated a mouse model of ascending GBS pregnancy infection [10, 11], we found GBS present within macrophage phagolysosomes. We evaluated bacterial RNA transcripts to identify bacterial factors that might be beneficial for GBS survival during encounters with macrophages. We identified a putative metal transporter designated cadD as being upregulated. We found that GBS mutants lacking this metal transporter (ΔcadD) showed impaired intracellular survival within macrophages. This metal efflux pump can transport several different divalent metals (not just cadmium as the name implies), including zinc. ΔcadD cells were not able to regulate intracellular zinc concentrations compared to the wild type and complemented strains and were also more susceptible to metal toxicity. How would a metal efflux pump promote intracellular bacterial survival? Along with other killing mechanisms, macrophages have several ion pumps to increase the concentration of metals into phagolysosomes where high concentration can cause bactericidal activity [12], thus metal efflux pumps such as cadD are able to purge metals from bacteria to prevent cell death.

In mice, ΔcadD did not cause preterm birth and had impaired invasion into gestational tissues compared to the wild type and complemented strains.

Interestingly, when we deleted macrophages prior to GBS inoculation, bacterial burdens of the wild type strain decreased to levels seen in the ΔcadD infected gestational tissues, while the tissue burden in ΔcadD infected animals was unchanged. These data suggest that macrophages, when not able to kill GBS, actually contribute to infection within the gravid reproductive tract. This story represents another example of how microbes can manipulate the immune system to cause disease. Unfortunately, when disease occurs during pregnancy, the infection itself (while still potentially severe) is only part of the morbidity and mortality that results. More work is needed to provide further insight into how host-microbe interactions lead to clinical outcomes and how we might translate these discoveries into novel therapies that support immune functions to lead to healthier pregnancies. 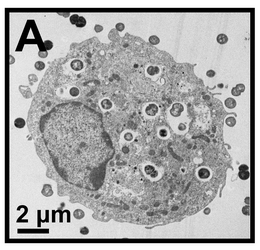 Clinical infections often start as interactions between microbes and host cells/tissues. We describe how a bacterial metal transporter enables GBS survival within macrophages allowing for macrophage enabled dissemination on the way towards perinatal infection and preterm birth.