Gene expression of a marine grazer during bacterivory and starvation

While my sabbatical at UBC I did not have in mind any lab work, just focus on reading, writing, discussing, and planning future research lines. My interest in protists diversity, transcriptomics, and single cell approaches made The Keeling Lab a perfect environment to spend a few months and explore new ideas. My plans, however, unexpectedly changed after a few weeks of being there due to several facts. First, our microbial diversity data from the Malaspina global expedition had identified the cultured heterotrophic flagellate Cafeteria burkhardae in almost all samples, often as a rare component but sometimes at high abundance. Microbial ecology generally suffers the lack of cultured model species, and this one seemed a good model of a copiotrophic bacterial grazer, which uses hotspots of high bacterial abundance for fast growth and has successful survival mechanisms during starvation. Second, a culture of Cafeteria burkhardae had been isolated in the Pacific Coast by a scientist two doors away from my temporary office, so I had the option to easily get the culture (thanks Curtis and Christoph!) for which I already had access to its genome as part of a previous collaboration. Third, I became aware during my first days in The Keeling Lab of how much expertise was there (in culturing, transcriptomics, bioinformatics) and how open my new lab mates were to collaborate.

For the above-mentioned compelling reasons, I decided to complement my sabbatical plan and design a very simple (but novel) differential gene expression survey with C. burkhardae. The experiment consisted in comparing the gene expression at the exponential phase, when cells were actively preying on bacteria and converting the prey to flagellate biomass, and the stationary phase, when the cells survived for weeks after exhausting the bacterial food. The obtained results were clean and interesting: upregulated genes at the exponential phase were related to DNA duplication, transcription and translational machinery, protein remodeling, respiration and phagocytosis, whereas upregulated genes in the stationary phase were involved in signal transduction, cell adhesion, and lipid metabolism. It was particularly interesting the identification of a few highly expressed genes related with phagocytosis, an ancient eukaryotic mechanism fundamental for evolution but also central for the ecological performance of these grazers. Among these, we identified high gene expression of the proton pump V-PPase, likely to acidify the food vacuoles, cathepsins, to hydrolase bacterial proteins to make them usable for flagellate metabolism, and peroxidases, perhaps to participate in prey killing by oxygen radicals.

The flagellate C. burkhardae clearly shifted its repertoire of expressed genes to accommodate the different needs at the different growth phases. The highly expressed genes likely contributing to bacterivory could be later used, along with the proper controls and expanding the set of these genes to other oceanic species, to target phagocytosis on bacteria in marine ecosystems. This is indeed a fundamental process that controls marine bacterial populations, remineralizes inorganic nutrients, and transfers prokaryotic biomass to higher trophic levels. The resulting work shown in this paper provides the seeds to use gene and genomic data to link the huge phylogenetic diversity of marine grazers with their potential functional diversity in the ecosystem. 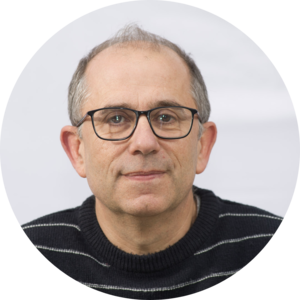 CLAVERIE
about 1 year ago

Long time no see. Good work, but I have a problem with the figure coloring: how come DNA replication and repair, and DNA metabolism are much redder (active?) during the "stationary phase"? Thanks.

Ramon Massana
about 1 year ago

Hi Jean-Michel, nice to hear from you as well.

The comparison between states is relative, so these two functions may appear stronger in the stationary phase because the other functions are downregulated. In fact, the expression of these two functions is low, as shown by the green bars in Fig. 5 (they include a red cell because values are normalized within each function). Also, the genes involved (9 within DNA replication and repair and 4 within Nucleic acids metabolism) show contrasted expression patterns (6 are upregulated at the stationary and 2 at the exponential, see Fig. S5). This plot was constructed to get a general overview of the expression patterns among all the functions identified.

What do you want to do ? New mailCopy

CLAVERIE
about 1 year ago

.. to do: nothing. When we use plots like this we normalize the transcription level for each gene separately (averaging) and color the intensity with respect of the average (or other type of mean). This then as the inconvenience that the quantitative aspect (highly vs lowly expressed) disappears. Nobody's perfect!