Our skin is our largest organ and functions as a physical barrier to the outside environment. When this barrier is breached in the form of a wound, our skin heals itself through a coordinated wound healing response.
Alex Cheong
Graduate Research Assistant, University of Wisconsin-Madison
Follow
Like Liked by Massimo Tosco and 1 other

Our skin is our largest organ and functions as a physical barrier to the outside environment. When this barrier is breached in the form of a wound, our skin heals itself through a coordinated wound healing response. Failure to proceed through the wound healing process results in chronic non-healing wounds. After over a decade of high-throughput sequencing surveys, we know that chronic wounds are colonized by diverse microbial communities. The potential for interactions within these communities complicates the single-microbe pathogen paradigm that is common in medical microbiology. While traditional wound pathogens such as Staphylococcus aureus are widely found in such wounds, their presence, abundance, and targeted treatment fails to correlate with and predict wound healing outcomes. Instead, longitudinal studies have uncovered ecological factors such as the stability of microbial communities over time that better explains the association with wound healing. In addition, commonly ignored and under-detected microbes such as skin commensals, anaerobes, and fungi are hypothesized to be important biomarkers for treatment and predictors for wound healing outcomes, suggesting that microbial interactions may play an important role.

It has previously been reported that pathogenic fungi are associated with increased tissue death and slower wound healing in patients suffering from diabetic foot ulcers, a type of chronic wound commonly found on the feet of people with diabetes. We isolated fungi and bacteria from wounds and showed that they can form polymicrobial biofilms in vitro, with the bacteria showing close adhesive interactions with fungi under the microscope. Biofilms are communities of microbial aggregates often covered with an extracellular matrix. In this study, we showed that adhesion of the Gram-negative bacterium Citrobacter freundii to Candida albicans yeasts was mannose-sensitive, suggesting that adhesion is mediated by mannose-specific type I fimbriae. These interactions increased virulence by triggering the yeast-to-hyphae transition of C. albicans, altering the morphology of the resulting biofilm, and increasing neutrophil death.

In addition, these interactions changed depending on the order of colonization, with detrimental effects on the late arriver. These priority effects of an early colonizer on later colonizers were evident for the bacteria S. aureus and C. freundii, which formed a barrier that prevented fungal colonization of the underlying substrate, whether it be the wound bed in an ex vivo human wound or the plastic of a well plate. These priority effects were dampened for C. albicans, as late arriving bacteria were still able to colonize the fungal biofilm structures. These temporal interactions resulted in drastic changes to community compositional structure in terms of relative abundances, and also biofilm physical structure which we were able to visualize with microscopy.

This work was not possible without such supportive collaborators. With Dr. Jeniel Nett, our microscopy of in situ biofilms inspired us to look further under the microscope. Coupled with access to the unique human ex vivo skin wound model with Dr. Angela Gibson, it was a unique opportunity to study these microbes in a biologically-relevant environment.

We are now further narrowing and defining the scope of interaction between C. freundii and C. albicans. Is their interaction contact dependent or through diffusible molecules? Do these interactions extend beyond this pair of co-isolated strains from a patient wound? Are there broader implications of this interaction? Ultimately, our focus returns to understanding microbial interactions within the context of wound healing using a combination of top-down metatranscriptomics approaches and bottom-up wound healing models. 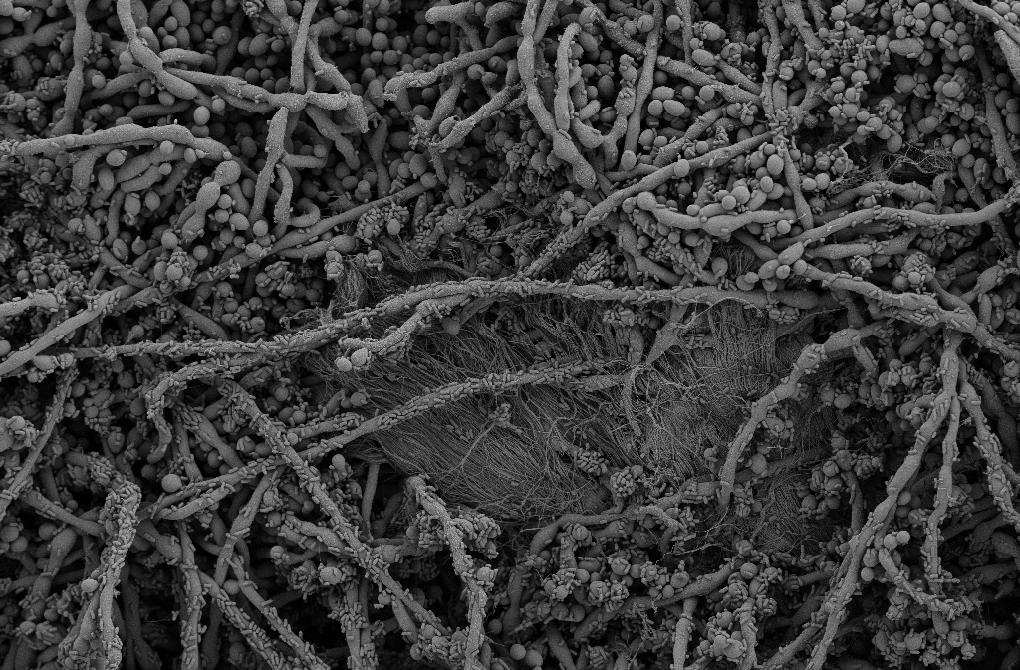 Our skin is our largest organ and functions as a physical barrier to the outside environment. When this barrier is breached in the form of a wound, our skin heals itself through a coordinated wound healing response.