Sara Stoner
Doctoral Student, University of Alabama at Birmingham
Follow
Like Liked by Salvatore Mandalà and 3 others
0

While many human bacterial pathogens have been extensively studied in the field of microbiology, one important factor has only been considered relatively recently in research- when colonizing humans, pathogens must interact with countless species of commensal bacteria. How do these pathogens physically interact with commensals located in the space that they are attempting to invade, and how can these interactions impact pathogenic infection? When trying to answer the first part of this question, we discovered a commensal species that exploits parts of a pathogen in order to sustain its own colonization.

Pseudomonas aeruginosa is the pathogen of interest in our study. P. aeruginosa is a leading cause of death in people with cystic fibrosis (CF), who are susceptible to developing airway infections due to a buildup of thick, unclearable mucus within their lungs (1). In recent years, more emphasis has been placed on the importance of studying P. aeruginosa in the context of polymicrobial communities. A recent study comparing the lung microbial profile of individuals with CF who have poor lung function to those who have stable lung function found that the presence of streptococci was associated with stable lung function (2). In the lungs of individuals with stable lung function, the most prevalent streptococcal species found was an oral commensal bacterium, known as Streptococcus salivarius. Although commonly found in the mouth, S. salivarius has been detected in sputum samples from the lungs in multiple studies which also employed techniques to rule out oral contamination of samples (3, 4). Additionally, S. salivarius has been found to colonize the respiratory tract in children as young as infancy (5, 6).

One of the ways by which P. aeruginosa evades the host defenses is through biofilm formation, in which P. aeruginosa cells are encased in a protective extracellular matrix primarily made of three exopolysaccharides- alginate, Pel, and Psl. Initial colonization of the CF lung occurs through environmental isolates of P. aeruginosa, which are non-mucoid in phenotype and mainly produce the polysaccharides Pel and Psl in their biofilm matrix (7). Over time, however, these non-mucoid isolates will accumulate mutations in the lung, leading to overproduction of the polysaccharide alginate and a resulting mucoid phenotype (8, 9). We knew that P. aeruginosa is associated with increased frequency of lung exacerbations and decreased lung function in individuals with CF, so we wanted to characterize interactions between P. aeruginosa and S. salivarius within a biofilm setting. We performed mono-culture and co-culture of the two species and then looked for changes in overall biofilm biomass via crystal violet staining, a common biofilm quantification method. When we cultured S. salivarius with a chronic, mucoid CF isolate of P. aeruginosa known as FRD1, we saw no changes in biofilm formation. However, we observed a large increase in biofilm formation compared to our single species cultures when we co-cultured S. salivarius with the acute, non-mucoid P. aeruginosa isolate PAO1. By quantifying colony forming units, we were able to confirm that S. salivarius biofilm cell number significantly increased in the presence of P. aeruginosa, while P. aeruginosa biofilm cell number did not change when cultured in a synthetic CF sputum media.

To figure out how P. aeruginosa enhances S. salivarius biofilm formation, we compared the two P. aeruginosa strains PAO1 and FRD1, because only PAO1 had the ability to promote S. salivarius biofilm. The main difference between the two strains is their exopolysaccharide production; FRD1 exclusively produces alginate, while PAO1 predominantly produces Psl and lower amounts of Pel. Because Psl is the main polysaccharide produced by PAO1, we decided to co-culture S. salivarius with a PAO1ΔpslA knockout mutant, which produces no Psl, as well as a strain in which we complemented the pslA gene back into our mutant, Psl-deficient PAO1 strain. Through crystal violet assays, quantification of colony forming units, and confocal laser microscopy, we concluded that S. salivarius biofilm growth significantly decreases when co-cultured with Psl-deficient PAO1, and the phenotype is rescued in the presence of our PAO1pslA+ complemented strain.

Lastly, we wanted to see if various environmental and clinical isolates of P. aeruginosa could produce the same enhanced biofilm phenotype when co-cultured with S. salivarius that we see with our lab adapted strain, PAO1. We obtained acute clinical non-CF P. aeruginosa isolates from the Clinical Microbiology Laboratory at the University of Alabama at Birmingham (UAB) Hospital, as well as mucoid and non-mucoid CF isolates from the UAB Cystic Fibrosis Research Center. Getting environmental isolates was not as easy, however. I collected plant and soil samples from my backyard and multiple parks, as well as water samples from a river in Birmingham, which I would then plate on Pseudomonas Isolation Agar and confirm P. aeruginosa colonies using P. aeruginosa-specific 16S rRNA PCR primers. After repeatedly failing to find isolates, I was able to obtain various water samples from all over Birmingham from another PhD student who was working on a public health project that involved studying local river water samples. From these samples, I successfully cultured ten non-mucoid P. aeruginosa environmental isolates, which to our surprise, were all able to produce enhanced dual biofilms when co-cultured with S. salivarius. A majority of our non-mucoid clinical CF and non-CF isolates also promoted dual biofilm formation in combination with S. salivarius, demonstrating that this interspecies interaction is common among non-mucoid P. aeruginosa isolates that have the potential to infect the CF lung. These findings suggest that S. salivarius colonization in the lungs could be promoted during early P. aeruginosa infection before P. aeruginosa transitions from a non-mucoid to a mucoid phenotype.

Overall, our findings suggest a possible model in which S. salivarius takes advantage of Psl produced by non-mucoid P. aeruginosa during early infection, when environmental P. aeruginosa isolates infecting the CF lung have not yet mutated and switched to alginate production. In a broader sense, our research is important because we have uncovered potential ways by which commensal bacteria can utilize polysaccharides produced by pathogens to change the CF airway polymicrobial community. 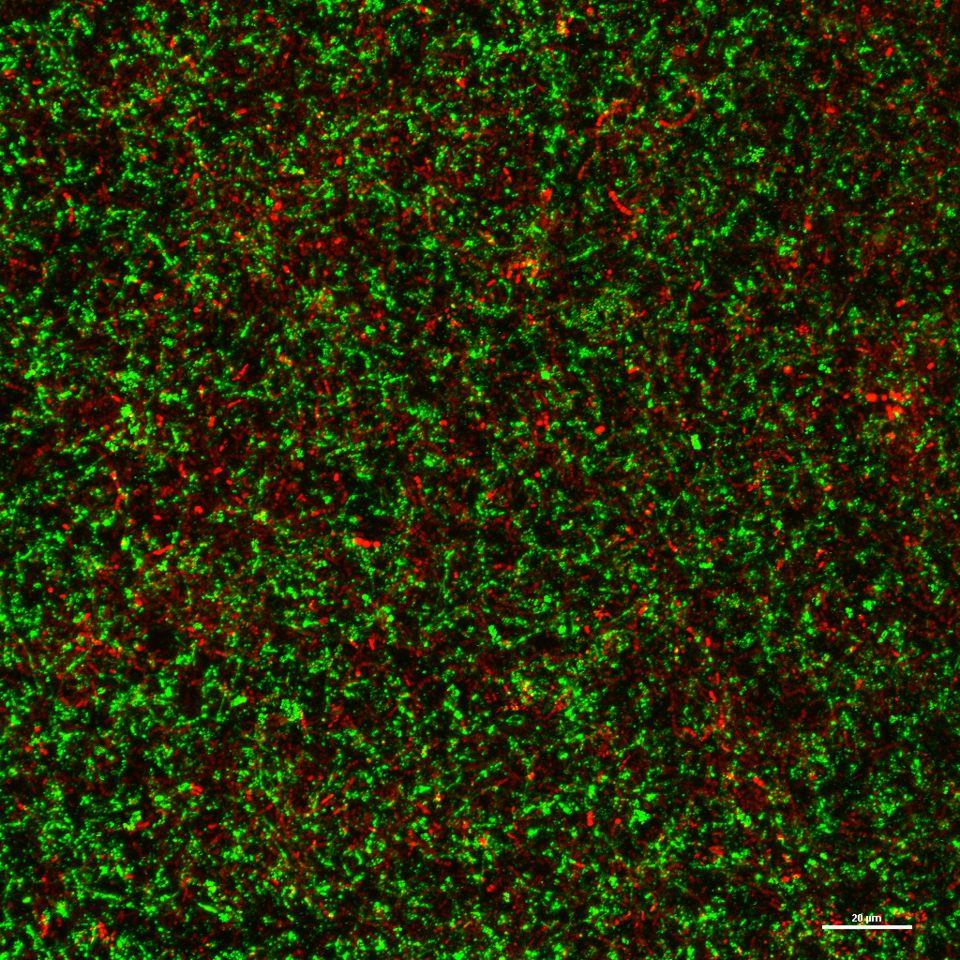