Francesca Short et al. identify natural polyamines as substrates for a drug efflux pump in the clinically-relevant pathogen, Acinetobacter baumannii. Their results suggest that efflux pumps now known to be involved in drug resistance may have originated as polyamine transporters.

Behind the headlines of the antibiotic resistance crisis is an evolutionary puzzle – how have bacteria become so exquisitely adapted to the modern clinical environment, with its associated arsenal of antimicrobials, in such a short time? Part of the answer is that some proteins that evolved for other purposes have collateral activity against antimicrobials. Though these activities may be relatively minor on their own, collectively they can make a big difference to survival.

Acinetobacter baumannii is a dangerous pathogen that persists unusually well in hospital environments, which in turn enables this bacterium to cause more outbreaks. Its persistence in hospitals is partly because it possesses efflux pumps that protect from synthetic disinfectants such as chlorhexidine. These specific efflux pumps evolved millions of years ago, yet they protect A. baumannii from a synthetic biocide that has only been around for ~100 years, raising the question of what they are really for 1.

In this study2 we explored the link between disinfectant resistance, specifically to chlorhexidine and benzalkonium chloride, and homeostasis of polyamine metabolites. Polyamines are an ancient, ubiquitous class of metabolites with various biological roles3. We thought polyamines were a good candidate for natural substrates of disinfectant efflux systems because they are structurally similar to chlorhexidine, with long, hydrophobic chains and positively-charged terminal groups. A protein that can transport polyamines might, therefore, have active site properties that also allow transport of chlorhexidine. In addition, polyamines are highly abundant in biology but can be toxic at high levels, so it is plausible that bacteria would have evolved ways to remove them from the cell.

To identify candidate polyamine efflux systems, we took advantage of the fact that expression of many efflux systems is switched on when their substrates are present. RNA sequencing of A. baumannii exposed to four different polyamines showed that three known multidrug efflux pumps were switched on in response – AceI, AdeABC and AmvA. Interestingly, all three efflux systems are known to be involved in disinfectant resistance. This result also came when members of our team had just shown that short-chain polyamines are natural substrates of AceI4, so seeing this gene on this list made us confident that we were on the right track!

The next step was to see if AdeABC and AmvA recognised polyamine molecules as substrates. We found that both efflux pumps were needed for full resistance. AmvA had an especially striking phenotype – without it, resistance to the long-chain polyamine spermidine dropped 64-fold – so we chose to investigate this system in more detail. To finish the study we still needed more experiments linking AmvA to polyamine transport, and also wanted to see if polyamines specifically switched on amvA expression through its regulator AmvR. Unfortunately, this was when the COVID pandemic hit and confined us all to working from home. For us, this was extra tight timing because I was set to move universities to start my own group just a few months later. Luckily things opened up enough for me to get back to the lab and tie up some of the loose ends, and we submitted the manuscript in my last few weeks at Macquarie University.

When the reviews came through they were positive and constructive, but responding to them was definitely a team effort. One request was more experiments showing that polyamines interact with AmvR – something that had been experimentally challenging because the protein is difficult to purify in large amounts. At this stage Dr Bhumika Shah joined the project and had the idea to use nano-differential scanning fluorimetry to explore polyamine binding to AmvR, as this method only requires a small amount of protein. Bhumika’s excellent work demonstrated that AmvR does indeed bind to long-chain polyamines, and that this binding is strong enough to be relevant in vivo. With this new information we had many strands of evidence showing that transport of polyamines is likely to be the “real job” of the disinfectant resistance protein AmvA – this efflux pump dramatically affects resistance to these molecules (in three strain/species backgrounds), it affects intracellular polyamine levels, and it is specifically induced by polyamine substrates binding to its regulator AmvR.

What do these findings mean beyond this study? Our discovery that three of the disinfectant resistance systems of A. baumannii (AmvA, AdeABC and AceI) are induced by, and confer resistance to, different polyamines suggests a link between ancestral polyamine tolerance and modern disinfectant resistance that is worth exploring. In addition, many different pathogens have amvA homologues that may also function as polyamine efflux systems. Our study also suggests that looking at regulation is a useful approach in exploring efflux pump activities. While we used a substrate first approach to identify polyamine-regulated efflux pumps, a gene-first approach – screening compound libraries for molecules that induce expression of specific efflux pumps of interest – could also be done in a fairly simple, high-throughput manner. Combining regulation information with resistance phenotypes could allow the identification of putative efflux pump substrates with high confidence.

Given their importance it is perhaps surprising that so many aspects of efflux pump biology are still poorly understood. Here, we have added another piece to the enduring puzzle of where their activities come from. We suspect that many of the “multidrug” efflux pumps that cause such devastating resistance phenotypes have evolutionary origins in other processes, and look forward to developments in this field in future. 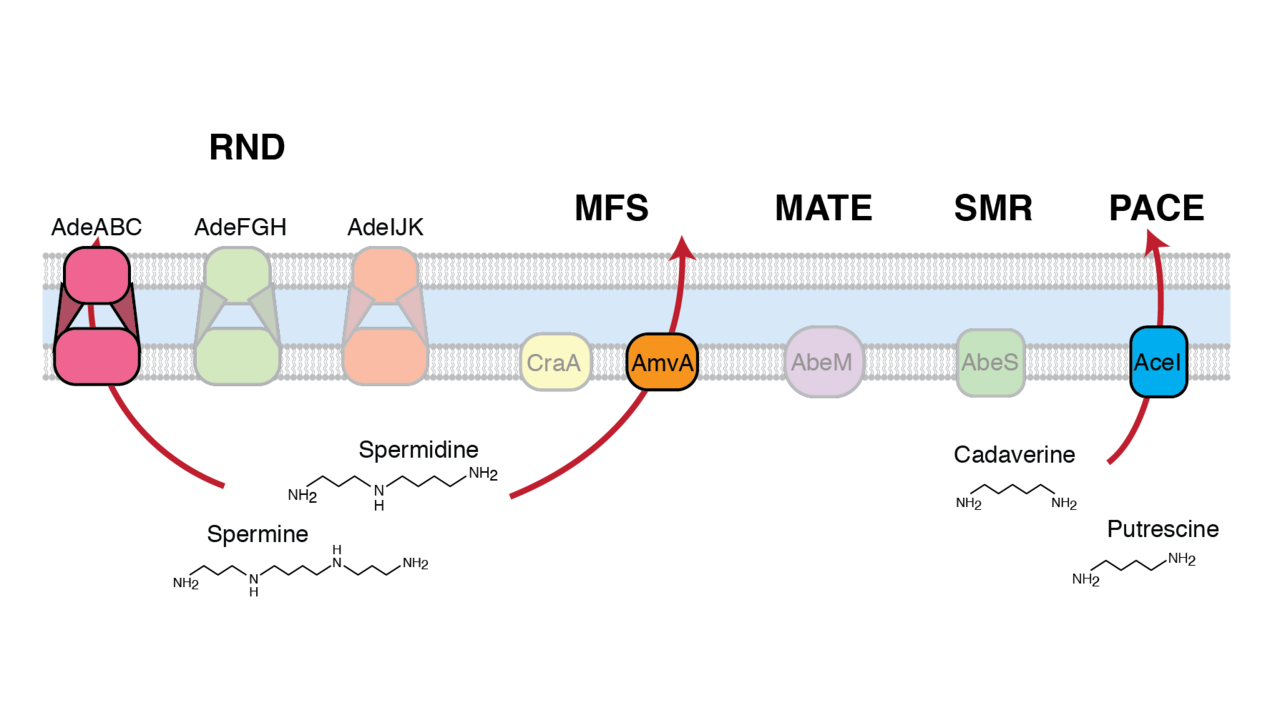