How can high biodiversity be maintained with just a few resources?

On a day during my Ph.D., my mind was on ants and the evolution of eusociality instead of working on my main project, which aimed to unravel the role of microbial communities on winemaking. It was then that Rob J. M. van Spanning, an Assistant Professor in my department, called me from the corridor,  “Chrats, I have something to ask you. There is a project about the role of microbial communities in benzene degradation. Would you be interested to take a look at it?” My heartbeat increased and my mind started to think about how to decline the invitation as I should have focus back on my research in wine microbes. I remembered that the benzene project had stopped because of the sudden passing of Wilfred F. M. Röling who initiated the project. Wilfred was an Associate Professor and a key figure in the crossroad between microbial ecology and systems biology1. I didn’t have the chance to meet him since I arrived in the Netherlands a few days after the incident. I ended up agreeing with Rob to take a look at the data that was left behind. This decision later led Rob to become my co-supervisor and a great mentor.

After reading a draft report, I immediately got excited. The experiments were well designed and performed by my former colleagues, resulting in high-quality data, but not much was done in terms of analyses. There was a highly diverse microbial community with more than 100 species, which was maintained in an anoxic bioreactor for more than 15 years. The medium contained benzene as the main carbon and energy source, nitrate as the electron acceptor, a few vitamins and ammonium. The original aim was to gain fundamental knowledge on anaerobic microbial benzene degradation, but another idea gradually materialized in our minds. How can high biodiversity be maintained with just a few resources?  The contradiction of the competitive exclusion principle came to my mind and the paradox of plankton in response.

Analyzing multi-omics dataset such as this one is a challenge on its own. In addition, the raw data was scattered among different collaborators and departments. I learned a valuable lesson from that, to always deposit all experimental data with sufficient information for others to understand their meaning even after many years. Long story short, I came with the first results after re-processing and analyzing the majority of the data and the potential of the study was crystal clear to everyone involved in the project. We got really excited about what was coming next. Based on metagenomics and metatranscriptomics, most of the metabolic activity of the community comes from the biofilm and not from the liquid phase. Then the excitement continued from the discovery that the most dominant members of the community were found distributed across different functional groups.

These new insights on the spatial and functional distribution of the community gave me the confidence to visit the place where everything started. I met Jan Gerritse who still maintains the bioreactor at Deltares in Utrecht. Also, I had the opportunity to meet the actual benzene microbes which I was analyzing behind the computer digits (Fig.1). Further integration of the data and analysis led to the insight that most of the community members likely feed on metabolic left-overs or on necromass while only a few of them, amongst which a member of the Peptococcaceae, are candidates to degrade benzene (Fig.2). Another experiment was also carried out by my former colleagues Lucas Fillinger and Ulisses Nunes da Rocha. They had grown highly diluted batch cultures from the original bioreactor on the same media, giving the community a fresh start. The analysis of these data verified that the same member of the Peptococcaceae is the main driver of anaerobic benzene degradation. 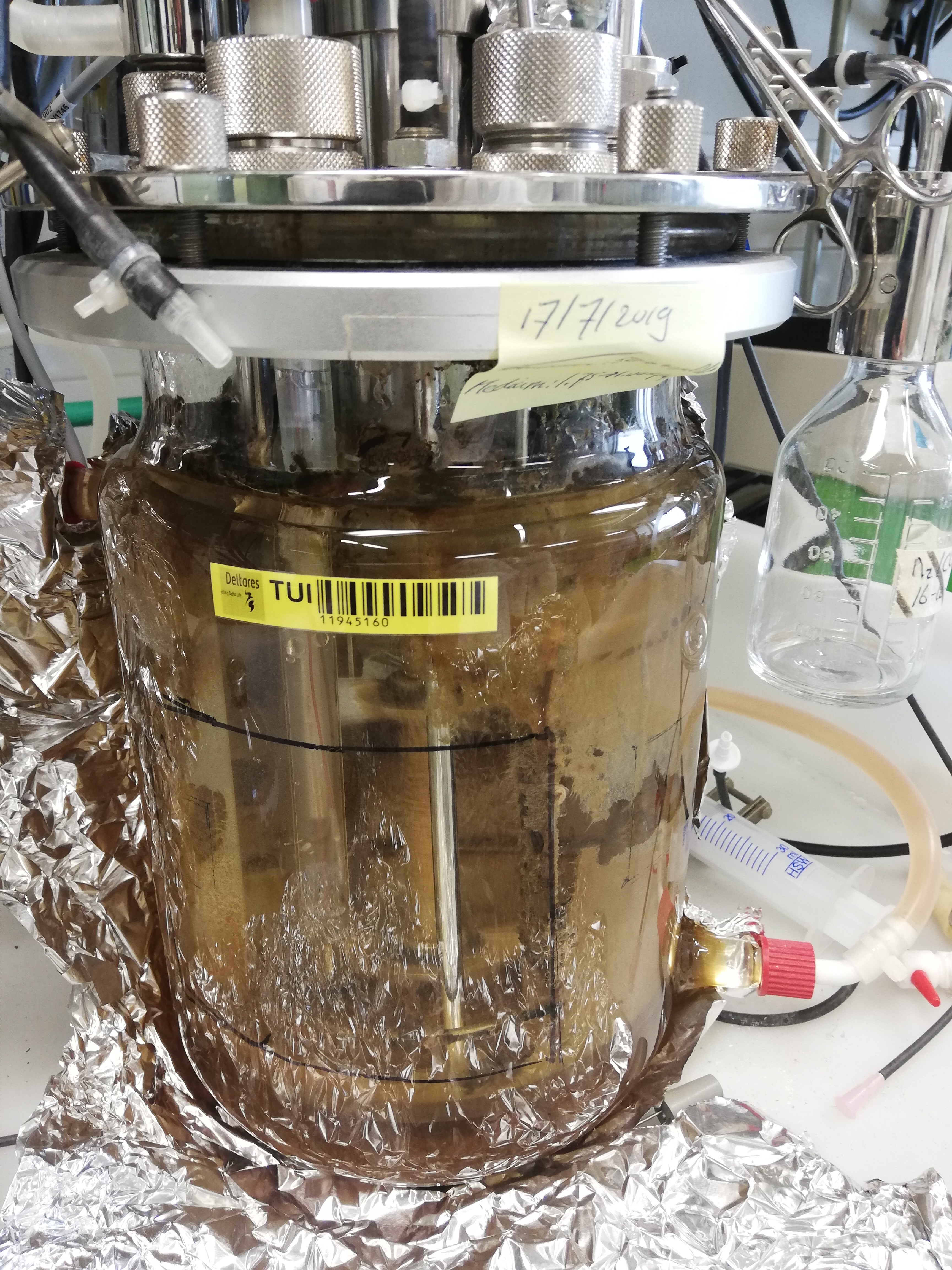 Figure 1. The anoxic bioreactor fed with benzene as the main carbon and energy source and nitrate as the electron acceptor. It is maintained to this day in Deltares, Utrecht, The Netherlands. The photograph was taken on September 10, 2019.

Still, the initial question was not fully answered. How can high biodiversity be maintained with just a few resources? We hypothesized that this could be achieved by the interdependencies between the few benzene degraders and the remaining members of the community, ultimately resulting in a food web with different trophic levels (Fig.2). Literature indicates that a big part of microbial communities tends to divide the labor and develop syntrophic relationships resulting in complex structures. The details of the mechanisms behind such a phenomenon are still largely elusive and remain an open quest for the future for those fascinated by the thrill of the unknown. 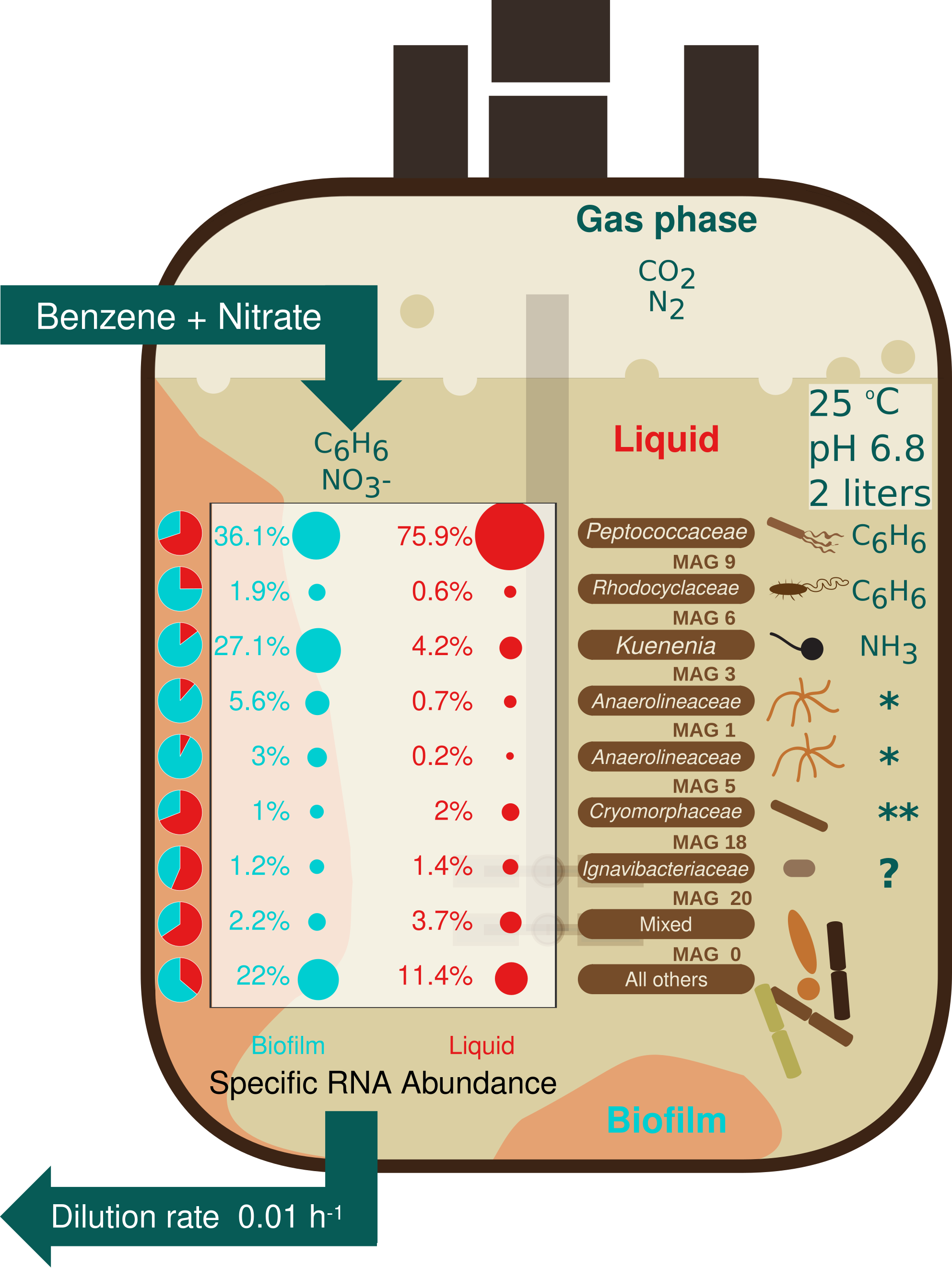 Figure 2. Schematic representation of the anaerobic benzene degrading microbial community in a 15-years old bioreactor, highlighting the dominant niches. The scheme presents the characteristics of the 7 dominant metagenome-assembled genomes concerning expression levels in biofilm and liquid along with their preferred energy sources. The pie charts show the ratio of relative specific RNA abundance between biofilm (teal) and liquid (red) with the corresponding values. The values and symbols in teal are derived from samples of the biofilm phase, those in red from samples of the liquid phase. 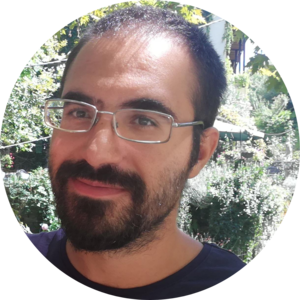