Nucleic Acid vaccines need to be expressed in the tissue before they can induce an immune response. But at the same time the immune response can dampen their expression. Getting this balance right is important for the next generation of these vaccines.
John Tregoning
Author: Infectious. Reader in Respiratory Infections., Imperial College London
Follow
Like Liked by Salvatore Mandalà and 3 others
0

onlinelibrary.wiley.com needs to review the security of your connection before proceeding.

Vaccines can be made of all sorts of things – the pathogen itself, either killed or in a weakened form; protein or sugar from the coat of the pathogen or nucleic acid derived from the pathogen. This nucleic acid can either be double stranded DNA or single stranded RNA. And whilst RNA has suddenly acquired celebrity status, the DNA based approach is the older (slightly less successful) sibling.

One of the ongoing challenges with nucleic acid-based vaccines is balancing the expression of the vaccine antigen against recruiting the immune cells that are needed for the vaccine response. This is because, unlike older vaccines, nucleic acid vaccines need the cells of the body to make the protein that the immune system will recognise in situ. There are 2 challenges with this, firstly the DNA itself can trigger a cascade of events that mean the cells are less likely to make the DNA encoded protein and secondly, if the cells can be persuaded to make the foreign protein, it can act as a flag for the immune system to target and attack those cells.

We were interested in this second challenge in our recent study: Blocking T-cell egress with FTY720 extends DNA vaccine expression but reduces immunogenicity. We wanted to understand how one arm of the immune system – the T cell impacts the response to DNA vaccines. T cells have a range of roles, including where one T cell subset (CD4 T helper cells) orchestrates the immune response to another T cell subset (CD8 T killer cells) to facilitate killing of infected cells. The CD8 cells recognise target cells because infected cells wave tiny bits of foreign protein on their cell surface.

To explore the role of these different T cells in the context of DNA vaccines, we made use of a protein called luciferase; this comes from fireflies and gives them the ability to produce light. Technically speaking it is an enzyme that catalyses the breakdown of a molecule called luciferin, when luciferin is chopped up by luciferase it becomes unstable and can only relax by releasing light energy in the form of light.

We injected DNA encoding luciferase into the leg muscle of mice and measured how much light their legs emitted. As expected, the injected mice produced light (not loads – you need a special machine to measure it); the amount of light peaked 2 days after injection but disappeared 3 weeks later. To test the role of T cells, we gave one group a drug called FTY720 (or fingolimod, which is why we refer to it as FTY720). FTY720 has the interesting property of preventing T cells moving around the body – so they can’t get to where the luciferase was being made. The mice treated with FTY720 kept on producing light for as long as we injected them with the drug. The FTY720 injections could be staggered, it just needed to be kept over a threshold.

We thought this was then going to be good news in terms of the immune response, reasoning that the longer the vaccine was made in the cells the greater the response. So, we repeated our study, but instead of using DNA making luciferase and measuring light, we used DNA that encoded the surface protein from HIV. In this experiment, the FTY720 significantly reduced the immune response to the vaccine – with the treated mice making much less antibody.

These studies reflect the fact that T cells have 2 roles; the killer CD8 T cells which can kill the cells that have taken up the DNA vaccine and are making the foreign protein but also the helper CD4 T cells which boost the immune response. FTY720 was a blunt instrument shutting down both types, with a resultant negative impact. This study showed us that T cells can limit expression of DNA vaccines in the host cell, but we need to do more research to extend that expression without impacting other arms of the immune response.

Do dirty viruses make you sicker? 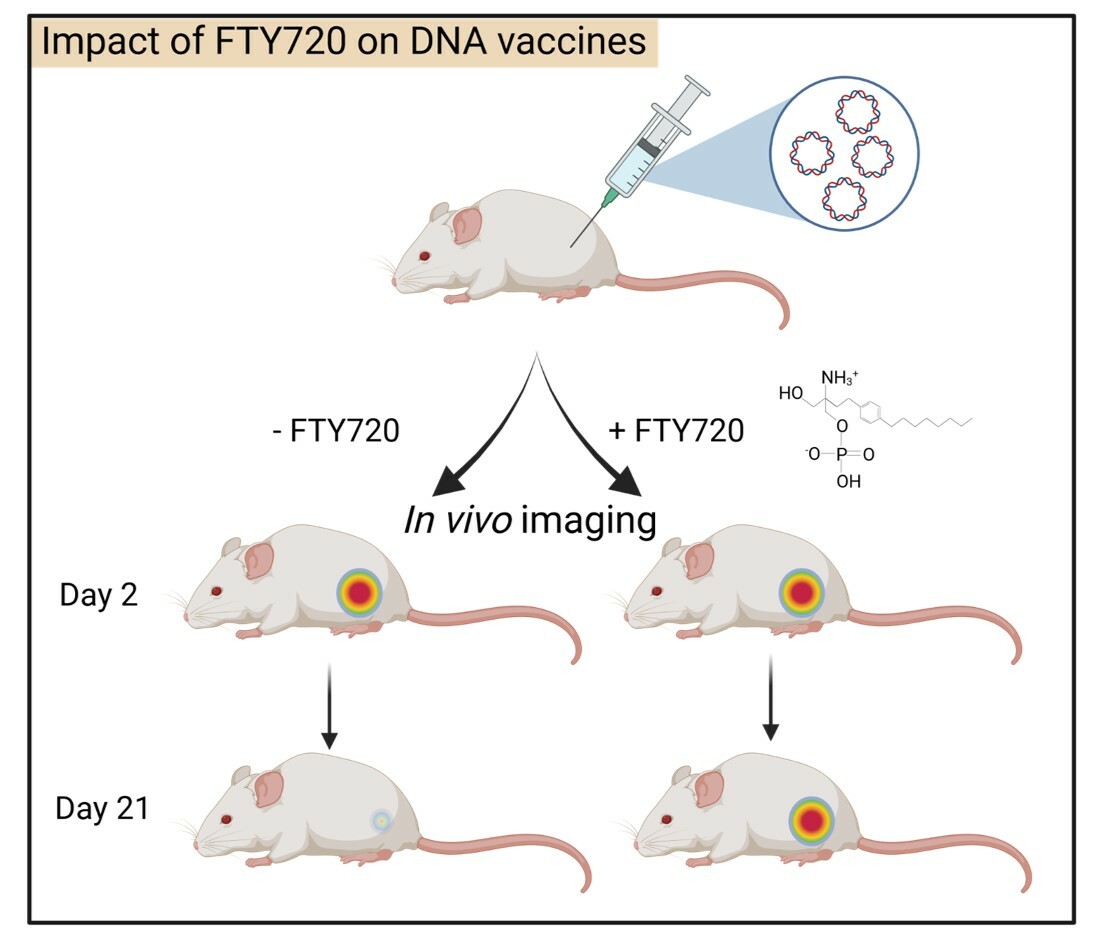 Nucleic Acid vaccines need to be expressed in the tissue before they can induce an immune response. But at the same time the immune response can dampen their expression. Getting this balance right is important for the next generation of these vaccines.