Did we just give Mycobacterium tuberculosis a metabolic disease?

From a protein of unknown function to a potential drug target. The characterization of the membrane oxidoreductase EtfD started as a "my gene" kind of story and progressed to the identification of an essential pathway for Mycobacterium tuberculosis pathogenesis.

The exploration of Mycobacterium tuberculosis – etiological agent of tuberculosis (TB) - genes of unknown function as potential drug targets was one of the hot topics in the Ehrt-Schnappinger labs when I joined as a postdoc. I was challenged to go through the library of conditional knockdown strains (protein depletion system responsive to anhydrotetracycline) available in the lab and pick a set of genes of unknown function for further characterization. The idea was to apply high-throughput techniques to characterize these strains and follow-up on the more promising candidates. However, my plan was derailed by the domain architecture of a particular gene - the membrane oxidoreductase Rv0338c (re-named EtfD). Bioenergetics is a topic that always fascinated me, and the respiratory enzyme chimeric nature of EtfD – part nitrate reductase, part succinate dehydrogenase – was intriguing and led me to a “my gene” kind of story.

EtfD depletion led to different outcomes regarding M. tuberculosis growth: no growth inhibition in liquid medium and strong growth inhibition in solid medium. This enticed me to make elaborate hypotheses to explain these phenotypes. Fortunately, my mentors Sabine and Dirk asked the obvious question: do the liquid and solid media have the same components? The media are indeed very similar, but they do not have the exact same composition. We have found that oleic acid was the culprit of growth inhibition when EtfD was depleted. The parsimony principle saved the day as it normally does in science.

We had an anchor concept: EtfD is linked to fatty acid metabolism. Cultures of wild type, knockout (etfD deletion), and complemented strain (knockout strain expressing an etfD native copy) in media with different single carbon sources revealed that fatty acids with four carbons or more and cholesterol (all require β-oxidation to be utilized) do not support the growth of etfD knockout. Moreover, long-chain fatty acids at concentrations compatible with wild type growth were bactericidal to the knockout strain. This was an exciting finding because fatty acids and cholesterol are the main carbon sources M. tuberculosis utilizes in the host. We were thus pleased to observe that mice infected with etfD knockout were able to clear the infection.

In a shared elevator ride to the BSL-3 facility, I mentioned these results to Robert Jansen, a former postdoc in Kyu Rhee’s lab at Weill Cornell Medicine, and now an Assistant Professor at Radboud University, to which he replied, “why don’t you do metabolomics?”. In my opinion, big datasets without a proper physiological context tend to not bring clarity to the picture. However, Robert convinced me that metabolomics could provide a short-cut to the function, if we could detect some striking difference. Our collaboration ended up being very fruitful and fun. Using labelled butyric acid, we observed that butyryl-CoA (butyric acid β-oxidation intermediate) was accumulating in etfD knockout. This provided a promising link between EtfD and the β-oxidation enzyme that utilizes acyl-CoAs as substrates – acyl-CoA dehydrogenases (ACADs). But was this a direct interaction?

In parallel, I collaborated with Ruojun Wang, a former postdoc in our lab and immunoprecipitation extraordinaire (currently a postdoc in Princeton University), to identify EtfD binding partners. Ruojun’s experience with membrane proteins made a technically challenging experiment look like just another Monday in the lab. We have identified 45 binding partners and devoted special attention to cytosolic interactors, given that β-oxidation is a cytosolic pathway. A literature search led me to get interested in FixA (re-named EtfB) because it is a homologue of the human enzyme electron transfer flavoprotein (ETF) β-subunit. Human ETF, together with its cognate membrane oxidoreductase, are necessary for the re-oxidation of the FAD co-factor of multiple ACADs. Mutations in either the ETF or the membrane oxidoreductase encoding genes can lead to a metabolic disease designated multiple acyl-CoA dehydrogenase deficiency, which is characterized by the inability to oxidize fatty acids. This immediately raised a flag because it resembled what we observed in the etfD knockout. Did we just give M. tuberculosis a metabolic disease? EtfB encoding gene is in operon with the gene encoding the homologue of the human ETF α-subunit (EtfA), suggesting that M. tuberculosis has a functional ETF.

Putting the data together, a hypothesis emerged: EtfBA and EtfD form a short-chain electron transport system necessary for the function of multiple ACADs in M. tuberculosis (Figure 1). We generated three pieces of evidence that strongly support this hypothesis. 1) With the help of Adrian Jinich, a postdoc in Kyu Rhee’s lab, we showed that EtfD, EtfB and EtfA have a strong co-occurrence pattern. 2) The etfBA knockout could not grow with fatty acids with four carbons or more and cholesterol as single carbon sources. 3) We reasoned that if we could provide etfD and etfBA knockout strains with an enzymatic activity that bypassed the ACAD step we would be able to rescue the phenotype. Fortunately, evolution has sculpted an incredible library of enzymes ready to be explored. Acyl-CoA oxidases participate in peroxisomal fatty acid b-oxidation and catalyzes the same reaction as ACADs, but instead of using an external enzymatic system, they use molecular oxygen to re-oxidize FAD. Expression of a codon adapted gene encoding an acyl-CoA oxidase (pox3) from the fungus Yarrowia lipolytica restored the ability of etfD and etfBA knockout strains to grow on some fatty acids and showed that the step catalyzed by ACADs was the cause of the observed phenotypes. 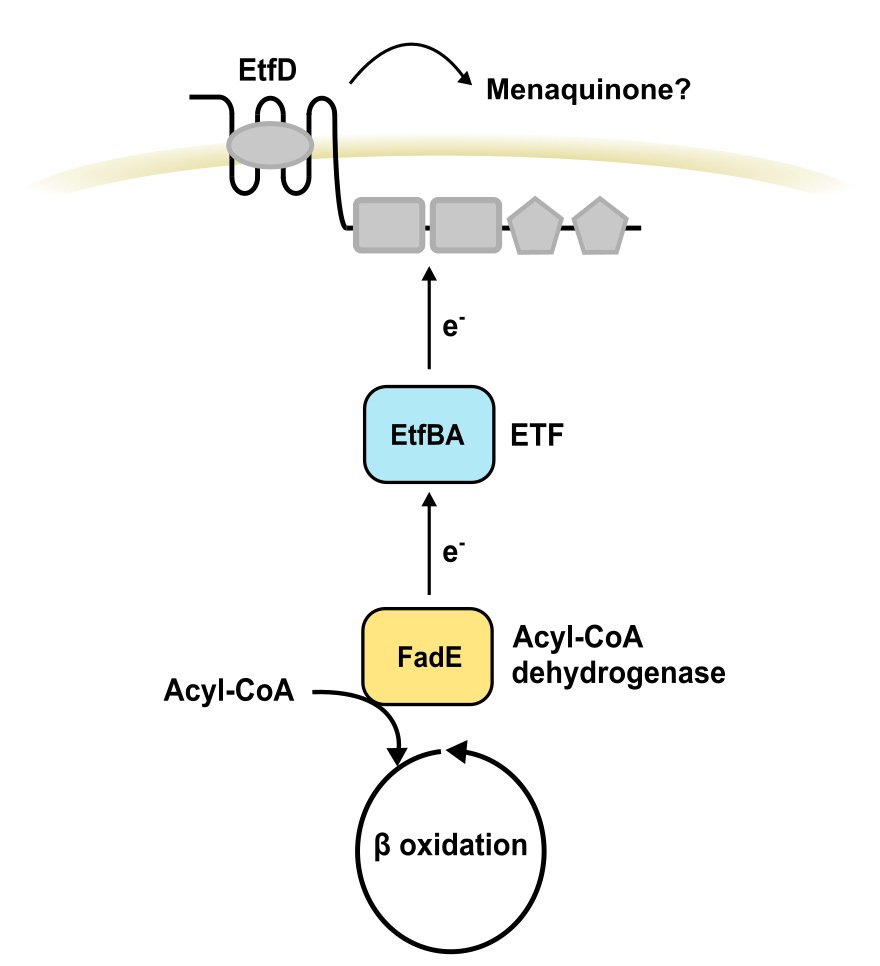 The fact that EtfD does not have a homologue in humans and that it is essential for M. tuberculosis makes it attractive for TB drug development. Recently, a series of EtfD inhibitors were identified. It would be very exciting to check if these compounds can kill M. tuberculosis in a model of infection. From a more fundamental perspective, other questions remain unanswered: are these enzymes involved in other pathways? What is EtfD’s electron acceptor? Could it be menaquinone, given that EtfD is predicted to bind a cytochrome b? Does EtfBA interact with all ACADs? And if it does, how can it accommodate ACADs’ structural diversity?

It is very rewarding when a small story opens new perspectives. I will certainly follow up on them. 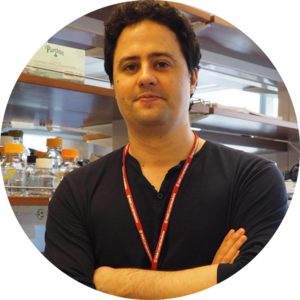 I am an Instructor in the Department of Microbiology and Immunology at Weill Cornell Medicine, NY, US. My work is focused in target biology of the human pathogen Mycobacterium tuberculosis: identification of drug targets, while unveiling new aspects of the pathogen's biology.