This paper sets out key priorities for understanding and protecting the ocean microbiome in the context of climate change and environmental degradation.
Chris Bowler and Adam Gristwood
2 contributors
Like Liked by Salvatore Mandalà and 5 others
0

The ocean microbiome is a hidden universe that forms more than two-thirds of the biomass in the global ocean. Galaxies of microbes including bacteria, archaea, fungi, microalgae, and marine viruses, compete for space and nourishment, whilst forging intricate relationships with each other and their surroundings.

As they live out their lives, microbes also perform roles that benefit the wider ocean and planet. They are nutrient providers, cloud formers, waste removers, water purifiers, chemical engineers, and architects of the ocean food web. They produce as much oxygen and absorb more carbon dioxide than all of the world's forests.

Like the microbiomes on and in us, a well-functioning ocean microbiome is dependent on diverse and bountiful microbial communities. Threats such as global heating, melting sea ice, ocean acidification, degraded coastlines, overfishing, and plastic or contaminants pollution can distort the ocean microbiome and undermine microbial productivity, the amount of oxygen they produce, and the quantities of carbon they shuttle to the deep ocean.

Our Perspective paper sets out key priorities for understanding and protecting the ocean microbiome in the context of these growing threats. These goals should be regarded as opportunities to build on recent scientific advancements, for example that reveal some of the ocean microbiome’s key components and essential roles. They aim to capitalise on a growing awareness that microbes really matter. And they seek to ensure ocean microbiome research benefits societies around the world, including from developing countries, and that resources from areas beyond national jurisdiction can be shared equitably.

The priorities outlined include more and strategic ocean observations, and the establishment of repositories and atlases that can facilitate ecosystem-scale research. They underscore the potentialities of sustainable innovations in areas spanning medicine, bioremediation, and carbon sequestration. They also look to promote ocean and microbial literacy, the development of research infrastructures and funding programmes, and ways of engaging international, multidisciplinary stakeholders.

One of the biggest challenges writing this Perspective paper was the realisation that the priorities outlined each deserve a far greater elucidation. For example, strategies to identify diagnostic markers of ocean health, to develop ocean microbiome-related sustainable development goals, and to tackle the important and nuanced questions relating to benefit sharing with developing nations and open data access worldwide, will be immense undertakings.

Nevertheless, this Perspective paper can serve as a guide for teams to dive in, build on, and take these tremendous opportunities forward. There is huge potential to collaborate with a wide range of actors, including multidisciplinary researchers, policymakers, educators, funders, entrepreneurs, citizen scientists, and other members of the general public. Doing so can help to steer research in a direction most beneficial to societies the world over.

Thanks to advances in ocean microbiome research, the relationship between the health of the ocean and the state of its microbiome is becoming clearer. Adventurous, round-the-world research expeditions have scooped up microbes from across the global ocean. International, multidisciplinary teams have zoomed in on their anatomy, explored their ecosystems, sequenced their genomes, and developed inventories of their genes, proteins, and molecular structures.

These developments are helping scientists to understand the ocean microbiome’s roles in key nutrient and energy cycles, and to predict the nature, movements, and functions of microbes, and to explore their stunning genetic diversity. The work is shining light on surprising symbioses, jaw-dropping genetics, and extraordinary evolution.

Huge challenges remain. The ocean stretches across more than two-thirds of the Earth's surface, and has an average depth of more than 3.5 kilometres. Microbes can be found almost everywhere in this multidimensional arena, thriving in open seas, coral reefs, estuaries, mangroves, polar ice, deep-sea trenches, on and under the rocks below, in stomachs, on gills, fins, claws, tails and even plastics…. They populate liters of seawater by the billion, and despite being very tiny they also have an astonishing genetic and morphological diversity.

At the moment, it is often hard to tell who the most important microbial players are in processes such as nutrient cycles. It is difficult to predict the impacts of threats such as climate change and ocean acidification on microbial populations, their resilience, their ability to adapt and evolve, or their effectiveness in nourishing the food web. It is not yet clear where microbial tipping-points lie. Or why microbiota in the ocean are so diverse. Nor do researchers have a firm grasp of the value of the ocean microbiome to humankind, fully recognise the services it provides, or the damage it prevents.

But this makes ocean microbiome science one of the most exciting areas of research today. There are legions of microbes and genes waiting to be discovered. There are many fascinating puzzles to be solved in relation to how their populations wax and wane with the seasons, currents, nutrients, salinity, temperature, depth, weather, and climate. There is so much to gain from studying their intricate interactions with each other and larger plants and animals like fish, and understanding these complex systems as a whole.

As teams of researchers around the world continue to uncover some of the ocean microbiome's greatest secrets, attention is increasingly turning to the ocean. Initiatives such as the United Nations' Decade of Ocean Science for Sustainable Development serve to underscore the importance attached to studying the ocean for humanity. The ocean microbiome must be a central component of this endeavour.

Ocean microbiome research is not only important to gain a better fundamental understanding of the seas. It is also a critical tool for mobilising wider actions to protect the global ocean. In this sense, it is hoped that this Perspective paper serves to define and draw out some of the biggest challenges at hand, and initiate discussions on how they can be solved. 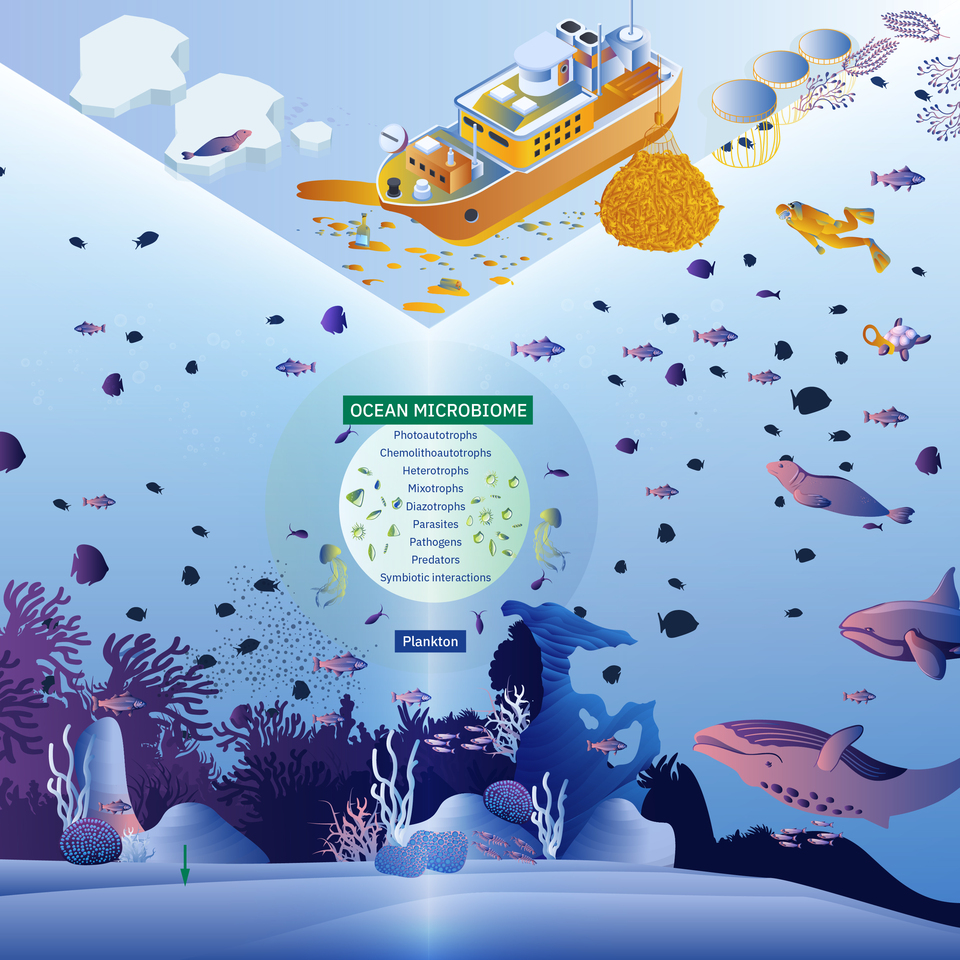 This paper sets out key priorities for understanding and protecting the ocean microbiome in the context of climate change and environmental degradation.