Extending the therapeutic window for acute viral infections could save lives. Here, the authors show that combination treatment with a human monoclonal antibody and remdesivir initiated at 6 days post infection with Marburg virus provides 80% protection in non-human primates.

Post-exposure treatment and management of acute viral infections, particularly in developing or under-developed nations, is an on-going challenge for medical personnel. Filoviruses, which include Marburg virus (MARV) and Ebola virus (EBOV), are highly pathogenic viruses capable of causing severe hemorrhagic fever, often resulting in death in a high proportion of infected persons. Both MARV and EBOV are endemic to Africa, and outbreaks of either virus can quickly overwhelm the already fragile and overburdened healthcare infrastructure present in many African nations. While there is a safe and effective vaccine for EBOV [1], there is no approved vaccine for MARV.

Due to their high pathogenicity, a major challenge in treating MARV and EBOV infections in humans is getting medicine into patients before they suffer irreversible organ damage and failure leading to death, which may occur less than two weeks after they are exposed to the virus. Often, the initial set of symptoms (known as the “prodromal phase”) may not be particularly alarming: fever, headache, muscle aches. At this stage, many people may not seek medical care. By the time more concerning symptoms arise, such as vomiting, diarrhea, and signs of internal and/or external hemorrhage (usually in the form of bruising or rash), conventional treatment, which is generally limited to supportive care such as keeping the patient hydrated, may not be enough to keep the patient alive. Therefore, there is a critical need for safe and efficacious post-exposure treatments in the event of MARV outbreaks to aid in controlling spread of the virus and to mitigate against loss of life.

Currently, two of the most promising approaches to post-exposure therapy for filovirus infection are monoclonal antibodies (mAb) and small molecule antivirals. Due to their similar physiology to humans, non-human primates (NHP), such as rhesus and cynomolgus macaques, serve as gold-standard animal models for testing vaccines and antivirals prior to conducting clinical trials in humans. We collaborated with researchers at Mapp Biopharmaceutical, Inc. and Gilead Sciences, Inc. to determine the efficacy of their respective products, MR186-YTE, a human anti-MARV antibody, and remdesivir, a drug which recently achieved U.S. Food and Drug Administration approval for the treatment of COVID-19 [2], in treating lethal MARV infection in the well-established rhesus macaque model. mAbs and antivirals like remdesivir have differing modes of action, e.g. mAbs work by binding to the virus, preventing further infection and neutralizing it, while remdesivir inhibits the virus’ ability to replicate.

We first established the therapeutic window of efficacy for each drug when administered alone. A previous study in cynomolgus macaques demonstrated that remdesivir was effective in preventing death from MARV infection when administered up to 5 days after the animals were infected [3]. To determine if this was the case with rhesus macaques, we challenged a group of 10 animals with a lethal dose (1000 plaque forming units, PFU) delivered intramuscularly. Beginning 5 days post-infection (dpi), 4 monkeys were treated with a single dose of the MRE186-YTE mAb, and 5 monkeys were treated for 12 consecutive days with remdesivir. A single animal served as the untreated control animal to ensure lethality of the virus stock. All animals developed symptoms consistent with MARV disease (MVD) 5-7 dpi, and the control animal was humanely euthanized 7 dpi due to severe MVD. By the study endpoint of 28 dpi, 4/5 (80%) remdesivir-treated animals survived MARV-infection, with all clinical parameters returning to normal by 19 dpi. 100% of MRE186-YTE treated animals survived to the study endpoint, establishing a high degree of post-infection therapeutic efficacy for both of these treatments when administered 5 dpi.

We next infected a group of 16 animals with MARV, but delayed administration of treatment until 6 dpi. Additionally, along with groups of 5 animals treated with MRE186-YTE or remdesivir alone, a group of 5 animals was treated with a single dose of MRE186-YTE along with 12 consecutive days of treatment with remdesivir. Again, a single animal served as an untreated control. As with the previous study, all animals developed symptoms consistent with MVD 6-7 dpi. However, unlike the previous study, all animals treated with MRE186-YTE or remdesivir alone progressed to severe disease requiring euthanasia, between 7 and 14 dpi. Remarkably, 4/5 (80%) of animals treated with both MRE186-YTE and remdesivir in combination recovered from infection and survived to the study endpoint, with a complete reversal of symptoms by 12 dpi. In addition to reversing disease symptoms and conferring survival, surviving animals in both studies were free of infectious virus in blood and tissues by the study endpoint, demonstrating that these therapies resulted in a complete recovery from the infection in these animals.

In astrophysics, the term “event horizon” defines the boundary of a black hole, whereby the velocity required to escape its gravitational pull exceeds that of the speed of light. Since nothing can exceed the speed of light, crossing the event horizon can be thought of as a point of no return. Previously, the upper limit for significant therapeutic rescue from lethal disease in animal models of filovirus disease was limited to 5 dpi. Similarly, in this study, we demonstrated this limitation for both MRE186-YTE and remdesivir when initiated alone. Thus, with regards to administration of MR186-YTE or remdesivir alone, 6 dpi can be thought of as the event horizon for MVD…despite intervention, the disease has progressed to a point of no return. However, we show that when these two treatments are combined, the window of efficacy for successful post-exposure therapy can be extended by at least one day. Therefore, the pull of the MVD “event horizon” has been weakened.

The ongoing COVID-19 pandemic has served as a harrowing reminder that emerging infectious agents can exert catastrophic tolls on human health and global economies. The work presented here demonstrates that combining therapies with complementary modes of action can extend the window of effective therapeutic intervention for viral infections, including for notoriously lethal viruses such as MARV.

The article can be accessed at the following link: 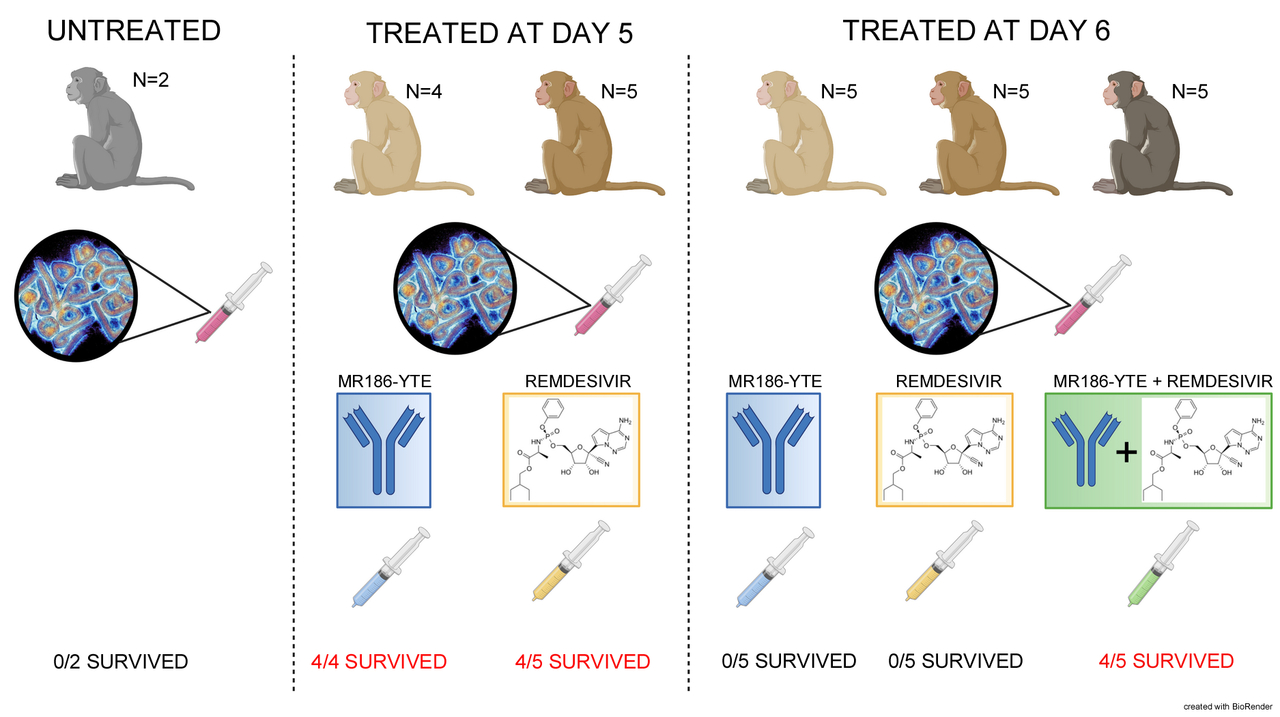