Veterinarians and environmental microbiologists work together to explore dominant bacteria on the cow rumen wall.
Cameron Strachan
PhD Student, University of Veterinary Medicine Vienna
Follow
Like Liked by Evelina Satkevic and 2 others
0

Different populations of Campylobacteraceae co-exist in the cow rumen epithelial microbiome thanks to metabolic trade-offs in utilization of versus inhibition by acetate and propionate, with implications for host carbon uptake.

Even though domestic ruminants, such as cows, are often most appreciated for their role in the dizzying variety of dairy products that are produced throughout the world, their ability to efficiently convert plant material into milk has, more importantly, contributed to food security for more than 10,000 years. As is well-known, ruminants depend on microorganisms in the rumen to ferment plant material into short-chain fatty acids (SCFAs; mainly acetate, propionate, and butyrate), which are then absorbed across the rumen epithelium. This process dictates how much energy is available to the host animal for milk production. What is unclear, however, is how the microbes that specifically colonize the rumen epithelium fit into the picture. This paper represents our first attempt to understand one of the few highly abundant bacterial groups in the rumen epithelial microbiome. To do so, we screened bacterial isolates for a specific 16S rRNA sequence and then used genomes from the isolates to resolve individual bacterial populations on a fine scale. We found that only two recently diverged populations were truly dominant, despite the co-existence of many other distantly related populations that share the same 16S rRNA gene. To generate hypotheses about the two dominant populations, we integrated various types of sequence data and analyses and, in the end, provided evidence for a trade-off in SCFA utilization that is consistent with the growth dynamics in the rumen.

For me, the most important thing behind the paper was getting to work in a supportive group with several highly skilled practitioners, and then stumbling on the opportunity to get help from some very talented microbiologists in Vienna. In case it is useful to other PhD students starting out, I will try and recount how I came to meet and work with them all.

I started my PhD at the University of Veterinary Medicine in Vienna, Austria, in the group of Evelyne Selberherr, because I had a friend (Benni Zwirzitz) doing his PhD with her who was really enjoying his time and finding interesting ways to apply environmental sequence data to prevent food waste1. Since I was more interested in animal associated microbes, I was happy to find out that Evelyne was also involved in several animal microbiome projects. Shortly after joining her team, I came to appreciate how Evelyne, the veterinarians working with her, and the head of the institute (Martin Wagner) studied the microbiome in a way that never overlooked the details of the host system or any potential implications for animal health. Several of their projects focused on the rumen epithelia in cows and they had repeatedly observed a highly abundant and active microbes associated with the Campylobacteracae. Because the Campylobacteracae are typically non-fermentative, I wondered what role these novel bacteria might have and felt I was surrounded by the perfect people to help me go after them. In fact, a ruminant expert and veterinarian (Viki Neubauer, Fig 1) who herself wrote several papers on the rumen epithelium2,3 was working in Evelyne’s group at the time. Thankfully, she was not only willing to take me to the research farm to take samples but teach me about rumen metabolism and physiology. I also happened to be living with someone (Anna Mueller) working at the Division of Microbial Ecology (DOME) in Vienna, a group highly skilled at cultivation and characterizing new microbes4. This all was probably reason enough to try and cultivate the rumen epithelial Campylobacteracae (Fig 2), but I did have an ulterior motive.

Well before deciding to do a PhD, I had been inspired by a body of work that first hypothesized microbial population structure from environmental sequence data, and subsequently studied the dynamics and ecology of the populations. I loved how the approach taken in this work is founded on solid theory and accounts for all the subtleties of microbial evolution, which in my opinion, is the most beautiful thing about studying microbes. I had always been curious about how these approaches might be applied and, as it turns out, this is exactly what one of my closest friends (Dave VanInsberghe) did in his PhD work. This work was in Martin Polz’s group and I was dead set on trying to learn and follow a specific framework they had proposed, known as reverse ecology5,6. Considering their small genomes and propensity to recombine, I thought the Campylobacteracae on the rumen epithelium would be an ideal group of bacteria to study using the reverse ecology framework but also knew I would need help doing so. Then, by some stroke of good luck, Martin moved to Vienna and my friend Dave, having just had a very positive PhD experience himself, recommended I ask him to help guide my PhD. After I got the first isolates and spent a few months catching up in microbial evolution and ecology (which included taking Martin’s course), Martin agreed to help me and we hashed out a plan. He then introduced me to his Post Doc (Annie Yu), who is much stronger than I am both quantitatively and in microbial ecology7, right when I was feeling particularly overwhelmed with bioinformatic details and ecological theory. One really fun thing about meeting regularly with Annie was that the microbial populations we were interested in seemed to have been structured similarly in terms of their evolution (in short, they looked surprisingly clonal!). This is probably a good opportunity to apologize to the people who sat beside us in Viennese Cafes as we talked about bacterial genomes…

It was incredibly fun to work with all those I’ve mentioned above, and I’ve learned tons from them. I hope the paper demonstrates the value of resolving microbial populations on a fine scale before integrating various types of data to generate and test hypotheses. I’m now most curious to know how the individual microbial populations might be linked with the metabolism of the cow, since SCFA absorption in the rumen is a central and rate-limiting process. For other fellow PhD students, I hope this post provides an example of how all the help you need might be just down the hall (or road). 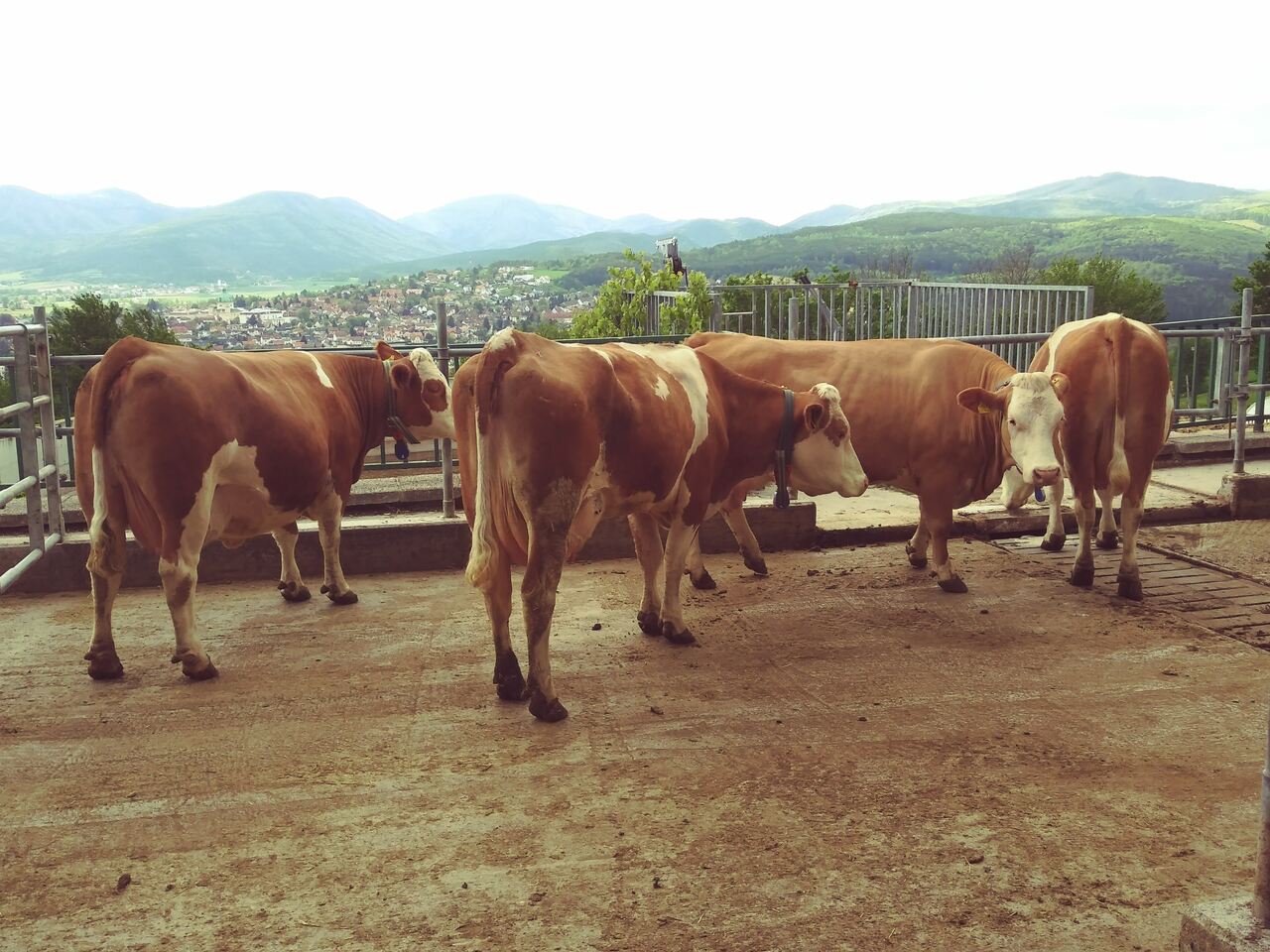 Veterinarians and environmental microbiologists work together to explore dominant bacteria on the cow rumen wall.