This study describes the mechanism by which Chlamydia trachomatis reprogrammes host glutamine metabolism in a c-Myc-dependent manner. The authors show that glutamine uptake via the SLC15A transporter and glutaminolysis are crucial for peptidoglycan synthesis and Chlamydia replication.

Obligate intracellular bacteria tightly depend on the metabolic resources in the host cell. Chlamydia the human pathogen exists in two different forms EB (elementary body) and RB (reticulate body). The EB is infectious, enters the host cell and builds up an inclusion where it converts into RB which is the replicative form. After several rounds of replication RB switches back to EB to lyse the cell for effective infection. The switch of EB to RB and RB to EB is critical for the life cycle of the bacteria, blocking of any of this conversion will effectively limit the bacteria spread.

The microbe that resides inside the host hijack the signaling pathways to reprogram the host metabolism. In our quest to understand how the bacteria interfere with the host signaling we first investigated how PI3K and MAPK pathway are effectively triggered during infection. This gave rise to a very interesting finding that revealed the infection leads to the depletion of the tumor suppressor TP53. Degradation of TP53 unleashed the pentose phosphate pathway that promotes metabolic support for the growing bacteria. In this present study we concentrated on downstream pathway that might activate and provide a continuous supply of nutrients for the bacteria. RNA sequencing and gene set enrichment analysis revealed a pronounced regulation of the proto-oncogene c-Myc and its target genes. During this phase of our research a similar finding was published by Munir Al-Zeer which reinforced our data. We now questioned the in-depth molecular mechanism how c-Myc, the master regulator of metabolism might control the growth of bacteria and discovered that inhibition of c-Myc impairs the development of the bacteria.

We had an independent study in parallel on the type of metabolites that the bacteria might take up in cell free or axenic conditions. This study gave a break through finding that glutamine was efficiently and specifically taken up by the bacteria. We tracked the fate of this metabolite by feeding the bacteria, labelled glutamine coupled with flux analysis and mass spectrometry.  This experiment gave astounding results on how the pathogen depend on host glutamine to run its partial TCA cycle. Since we saw in the presence of glutamine active metabolic pathway in the EBs which is rather the inactive stage of the bacteria compelled us to investigate on the morphology of the bacteria under transmission electron microscopy. The switch of EBs to RBs and initiation of replication as evident from the onset of early expressing genes left us totally flabbergasted. This finding now opened the importance of glutamine for Chlamydia and led us to explore the level of glutamine uptake and the genes regulating this. c-Myc being a master regulator and well-studied protein regulating glutamine uptake and metabolism helped our effort to connect these two stories. The use of mice that lack the major glutamine transporter for infection study revealed and strengthened the possibility of limiting this critical amino acid as a possible way of controlling the bacteria spread. Our study opens new avenue to battle bacterial infection that develop antibiotic resistance, one of the biggest threats to global health. 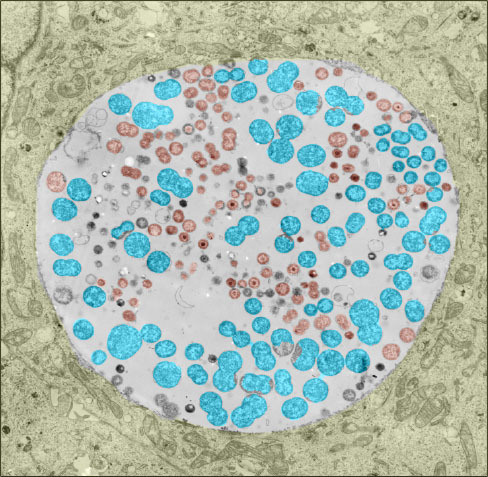