Aerobic anoxygenic phototrophic bacteria use light to produce ATP, but they require organic substrates. We measured the contribution of their photoheterotrophic metabolism to the carbon cycle in a freshwater lake, showing that dark measurements produce biased estimates of bacterial activity. 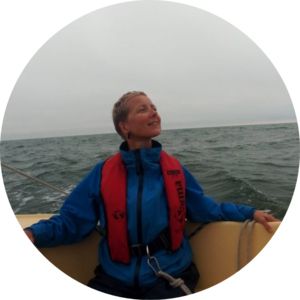 I started to work on aerobic anoxygenic phototrophic (AAP) bacteria in 2015 after I decided I needed a break from nanoplanktonic eukaryotes. I moved to the Czech Republic to join the group of Michal Koblížek (https://www.alga.cz/en/c-371-laboratory-of-anoxygenic-phototrophs.html), a scientist who participated in the discovery of these organisms in the ocean 1.

AAPs, as we call them, are fascinating microbes. They were discovered in 1978, the same year Garfield the cat was born. But what makes them unique is their anoxygenic, bacteriochlorophyll-a-containing photosystems. AAPs use them to obtain energy from light. In contrast to oxygenic or anaerobic photoautotrophs, AAPs do not need reduced compounds (such as H2O or H2S) as electrons donor because ATP is produced during a cyclic electron transfer. AAPs do not evolve oxygen but the presence of this gas is essential for their growth and photosystems' genesis. That’s why they are anoxygenic and aerobic.

AAPs are photoheterotrophs. They do not fix CO2 and they need organic substrates as a carbon source. Moreover, the energy from the light just complements their needs that are largely satisfied from classical respiration. Nevertheless, cultured species decrease their respiration by 75% and increase biomass yield by 50% in light 2-4 (Figure 1). As an aquatic micro-ecologist, I wanted to see how it looks like in the environment. I was lucky to get independent funding from the Czech Grant Agency (project no. 18-14095Y). I was joined by two PhD students: Izabela Mujakić and Cristian Villena Alemany, and we started the measurements in 2018 in a small, nice-looking lake nearby our institute (Figure 2). The area around the institute is occupied by hypereutrophic fish ponds that suffer from severe cyanobacterial blooms in summer. In contrast, lake Cep is meso-oligotrophic, so it is possible to swim in it on a hot summer day..

During 40 years since their discovery, AAPs were shown to be active members of bacterial communities, with larger cell sizes than chemoheterotrophic bacteria, exhibiting faster growth rates, and being favourite food for bacterivores. However, the question on the quantitative importance of photoheterotrophy by AAPs in the environment remained unanswered. It was because it is not easy to measure bacterial activity in light. First of all, light is used by cyanobacteria and algae that consume CO2 and evolve oxygen, making it impossible to discriminate between photohetero- and photoautotrophy. Moreover, CO2 may be also produced abiotically by photooxidation of organic matter, while UV light may inhibit biological processes. All these made the attempts to compare the light vs dark bacterial activity inconclusive 5. We overcame this challenge by measuring microbial activity in dark and infrared light (λ > 750 nm). These wavelengths in the oxic water column can be used only by AAP bacteria. This means that all other organisms perceived the incubations in the infrared light as lightless. Therefore, any difference in bacterial activity between these conditions could be attributed to the photoheterotrophic activity of AAP bacteria. With help of our technician, Jason Dean, we constructed an IR box to incubate our samples (Figure 3). We made it from acryl panels that cut off all the radiation < 740 nm but are transparent to light > 850 nm. As infrared light heats the water, the box was incubated in a 60-litre aquarium with a very efficient water-cooling system. To avoid any risk of the temperature difference between infrared and dark incubations, all the bottles were placed in the IR-box for incubation.

We measured bacterial activity (respiration and assimilation of organic monomers: glucose, pyruvate, leucine, and thymidine) from April till November for two years. To be sure that the anticipated difference would not be due to oxygen production by some unknown oxygenic phototroph that scavenges infrared light, we also measured the assimilation of inorganic carbon. After two years of field measurements, it took another two months to check and re-check all the data, and another month to check them again. Then, advised by prof. Petr Šmilauer, I updated my statistical skills to include linear-mixed models. It took a week to do the calculations and another three months to ensure that there had been no mistake. Finally, when this nightmare finished, the results were even better than we hoped for. The effect of the light on microbial activity was evident, and it exceeded 15% for respiration (Figure 4). As the AAPs requirement for ATP was satisfied by its production on photosystems, organic carbon could be redirected from catabolism to anabolism. This would result in a more efficient metabolism and increased assimilation rates of carbon sources in the light. And this is what we observed for glucose (+18%), pyruvate (+9%), and leucine (+6%). For the first time, photoheterotrophy by AAPs in nature was quantified.

We also performed some more advanced statistical analysis to understand how the dynamics of photoheterotrophic metabolism was driven, but for this, you must check out the original paper.

Our results alter the understanding of carbon fluxes at the ecosystem level. Respiration exceeds net primary production in most lakes, making them an important source of CO2 to the atmosphere on a global scale. However, as we have just shown, dark measurements overestimate microbial respiration. For our lake Cep, the amount of excessive CO2 based on the infrared measurements was lower by 0.54 × 109 g CO2 in 2018 and by 3.15 × 109 g CO2 in 2019 (Figure 5).

A profound understanding of the global carbon cycle is essential to keep any chance to alleviate the disastrous consequences of climate change. The average global temperature increased by about 1°C since I was born. However, there is still a 0.4 × 1015 g C y-1 mismatch between the known sources and sinks of the anthropogenic CO2 emissions. Can it be fixed by including the effect of photoheterotrophy? The global respiration of lakes’ epilimnion derived from the dark measurement was estimated to be 0.65 × 1015 g C per year 6, but this number needs to be upscaled to 1.29 × 1015 g C y-1 to account for the increased, satellite-based assessment of the global lake area 7. Assuming the contribution of photoheterotrophy by AAP bacteria to the community respiration is in the range provided here, the global lake respiration is lower by about 0.10 × 1015 g C y-1. This could account for 25% of the imbalance in the anthropogenic CO2 emissions. As AAPs are numerous in most aquatic habitats, such as the coastal areas of the ocean or mountain lakes 8, more measurements of microbial activity in the infrared light instead of in the dark are needed to provide a comprehensive understanding of the role of photoheterotrophy at the global scale. Our super simple and affordable solution – the IR-box – can be easily applied in any lab routinely measuring bacterial respiration and production to change the methodological paradigm.

My main area of scientific interest is the ecology of microorganisms in the aquatic environment. In my research I use modern molecular methods. The detailed directions of my research include: