ApoE and its isoforms have been implicated in the development of Alzheimer's disease and other neurodegenerative conditions. Our lab investigates its role in injury-induced neurogenesis, specifically how it affects newborn neuronal complexity and behavior after injury.
Elizabeth Stephanz
Medical Student, CUMC
Follow
Like Liked by Evelina Satkevic
0

The concept of adult mammalian neurogenesis has now been around for decades, though its relevance to brain disease remains unclear. This process appears to be integral to cognitive functions such as learning, memory, and in some cases, recovery from brain injury.1 Our lab primarily studies the mechanism of the brain’s apparent ability to self-repair after injury, with a specific focus on the connection between hippocampal neurogenesis and recovery from traumatic brain injury.

While we now have a relatively sophisticated understanding regarding the steps that control the birth and integration of newborn neurons within the dentate gyrus, the regulatory genes that underlie this process are not well understood. In 2011, our lab identified ApoE as a potential key regulatory gene, as it was upregulated in neural stem cells in mice early in development and its absence altered the rate of dentate gyrus development.2 In the brain, ApoE is produced and secreted mainly by astrocytes. It has been shown to play an integral role in lipid metabolism, neuronal repair, and beta-amyloid clearance. ApoE is most characterized for its association with the development of late-onset Alzheimer’s disease. In humans, ApoE exists in three different isoforms – ApoE2, ApoE3, and ApoE4. ApoE3 is thought to be the “wild-type” isoform, as it is the most prevalent and is not associated with disease.3 In contrast, the presence of the ApoE4 isoform is the strongest known genetic risk factor for the development of Alzheimer’s disease and is also correlated with poorer outcomes after traumatic brain injury.4 The connection between ApoE, hippocampal neurogenesis, and various neurodegenerative conditions has compelled our lab to study out how specifically the presence of ApoE and its isoforms affects these processes.

Given our finding that ApoE plays a role in regulating hippocampal neurogenesis, we set out to investigate the effect of various ApoE isoforms and ApoE deficiency on the maturation of newborn hippocampal neurons in uninjured adult mice. We used Sholl analysis to compare the dendritic morphology of newborn neurons by quantifying their branch points at increasing distances from the cell body of the neuron. We also quantified the density of dendritic spines to assess synapse formation in these new neurons.5 In this study, we found that newborn neurons in ApoE-deficient and ApoE4-expressing mice had less complex dendritic trees and reduced spine density as compared to ApoE-WT and ApoE3-expressing mice, indicating that the presence of ApoE plays a key role in the maturation of newborn hippocampal neurons in the adult brain. These findings may provide some insight into why there is a strong correlation between carrying the ApoE4 allele and the development of hippocampal-related neuropsychiatric diseases.

As our lab’s focus is on hippocampal neurogenesis after injury, our next project focused on the effect of ApoE and its isoforms on the maturation of neurons after injury. Our lab uses a controlled cortical impact (CCI) as a model to roughly mimic traumatic brain injury. In CCI, an impactor is programmed to hit one part of the brain at a given speed and depth correlated to the severity of the injury. It is a validated model of traumatic brain injury.6 Similar to our previous study, we found that the maturation of hippocampal neurons after injury was severely impacted by the lack of ApoE and the presence of the ApoE4 allele, leading to decreased dendritic complexity and spine density.7

We have demonstrated a clear role for ApoE in hippocampal neurogenesis in both uninjured and injured mice, specifically in the maturation of newborn neurons. Our current study takes this research one step further by exploring how depleting ApoE specifically in astrocytes just prior to injury affects neuronal development and cognitive recovery. In this study, we developed novel ApoE-conditional knockout mice to temporally and spatially regulate ApoE expression in astrocytes in injured and uninjured mice. This model allowed us to virtually eliminate ApoE expression in astrocytes just prior to injury, to more specifically analyze the impact of astrocytic ApoE on neurogenesis after injury. This contrasts with our previous work, in which mice were ApoE-deficient in all cell types from birth. In addition to analyzing dendritic complexity and spine density, we also performed behavioral experiments to assess how these changes correlate to cognitive recovery after injury. We used the Morris water maze task, a well-established behavioral test that requires a functioning hippocampus to succeed, to assess spatial memory.8

We found that the conditional ablation of ApoE mildly impairs the dendritic complexity of pre-existing hippocampal neurons, but it dramatically impairs complexity in newborn neurons after injury. In the Morris water maze, we found that mice with a “double-hit,” meaning those that were injured and had no astrocytic ApoE, had the most pronounced behavioral impairments, as compared to mice who were uninjured without astrocytic ApoE expression or mice who were injured but had normal ApoE. Together, these findings demonstrate a connection between the simplified dendritic complexity of injury-induced newborn neurons and poor performance in a spatial memory task in mice without astrocytic ApoE.

Over the course of our investigation into the role of ApoE and injury-induced neurogenesis, we have demonstrated that newborn neurons in the dentate gyrus require astrocytic ApoE not only for proper dendritic maturation, but also for regulation of various aspects of memory formation after injury. Our next steps will be to investigate the cell-specific function of human isoforms like ApoE3 and ApoE4 on these same processes. This work illustrates that ApoE function is critical to hippocampal recovery after TBI and supports further investigation of how ApoE status in humans affects recovery and potential treatments for those with neurodegenerative and trauma-induced brain disease. 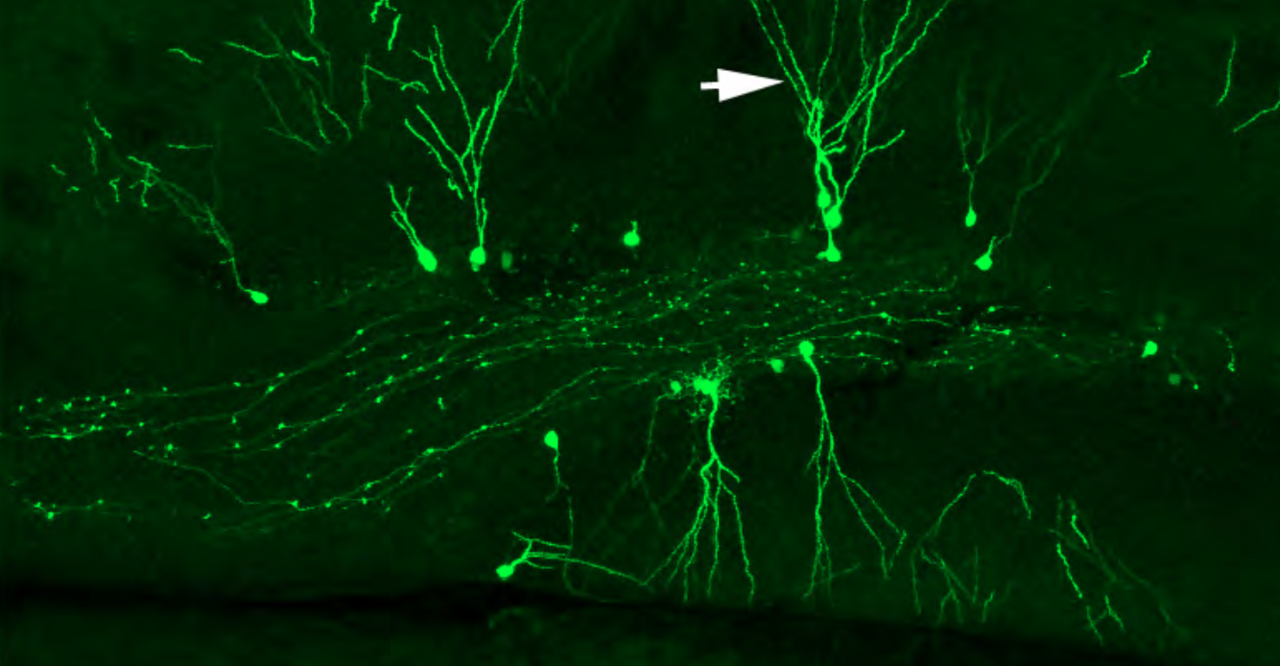 ApoE and its isoforms have been implicated in the development of Alzheimer's disease and other neurodegenerative conditions. Our lab investigates its role in injury-induced neurogenesis, specifically how it affects newborn neuronal complexity and behavior after injury.