Despite the availability of a safe and effective vaccine, measles remains the leading cause of child death among vaccine-preventable diseases. In this work, authors utilised a cynomolgus macaque model of infection, and a mesh nebuliser administration approach, to show efficacy of their aerosolized l…

Measles virus (MeV) leads to one of the most contagious airborne viral infection worldwide, causing 3 to 4 million cases annually with 207.500 deaths in 20191. Infection is followed by an immunosuppressive state, responsible of numerus complications2,3. Despite an effective live vaccine strategy, measles remains one of the leading causes of child death among vaccine-preventable diseases1,4. MeV is transmitted by droplets and aerosol and the infection starts in cells of the respiratory tract before being disseminated in various tissues through lymphocytes and dendritic cells5–7.

MeV is a single-stranded negative sense RNA virus encoding six structural proteins, including the hemagglutinin (H) and the fusion protein (F) responsible of the virus attachment to cell receptors and the virus-cell membrane fusion respectively. More precisely, after binding of H to the cell membrane receptor, subsequent activation of the F protein follows, leading to the insertion of hydrophobic fusion peptide into cell membrane. A second folding event occurs leading to the interaction between N- and C-terminal heptad repeat regions (HRC and HRN domains respectively), completing the virus-cell membrane fusion8. Our previous work showed that dimerized peptides derived from HRC region conjugated to a cholesterol moiety (referred to as “HRC4” peptide) inhibit the virus-cell membrane fusion process in cell culture and organotypic brain cultures8,9. Moreover, peptide administered intranasally to cotton rats and mice had showed reduction of the viral titer in cotton rat lungs and a significant increase in survival of mice9,10. Administration of the drugs by inhalation presents a noninvasive needle-free drug delivery route, allowing the drug deposit in lungs and limiting the systemic toxicity11. In this study, we used a customized mesh nebulizer to deliver MeV fusion inhibitory peptides to nonhuman primates (NHPs)-cynomolgus macaques which represent well-characterized model for measles infection in humans.

We initially demonstrated that fusion inhibitory peptide HRC4 does not promote neither selection of MeV drug-resistant variants nor exhibits the toxicity in vitro. A peptide dose of 4mg/kg given 3 times by nebulization, 24h and 6h before infection and 24h post infection, was chosen based on the initial studies in CD150 transgenic murine model. The size of nebulized peptide droplets were in the average of 4mm, allowing them thus to reach the airways. Our experiment included 6 monkeys divided in two group: the saline solution-treated group (C1, C2, C3) and the HRC4 peptide-treated group (P1, P2, P3). All macaques were infected with recombinant MeV expressing fluorescent eGFP protein (MeV IC323-eGFP). For regulatory reasons, monkeys were housed by two in each cage, resulting with a contact between C3 and P2, housed in the same cage (figure 1).

Figure 1. Experimental design. Six macaques were included in the study and housed by two in cages. They were infected at D0+6h post-nebulization with 104 PFU MeV IC323 eGFP. Treatment was administrated 24h and 6h before infection and 24h post infection with either 3mL of NaCl 0,9% (control group, C) or with 3mL HRC4 peptide 4mg/mL (experimental group, P). Blood samples were taken every 3 days during 16 days as well as the last day of the study, D28.

Is peptide nebulization toxic for animals?

After nebulization, we detected peptide in the different regions of the monkeys’ lungs using immunofluorescent assay and observed well preserved lung histology. The nebulization did not result with the systemic distribution of the drug, as peptide was not detected in urine, and was rapidly cleared from the serum. Moreover, the immunization against peptide was not observed, neither any adverse effect during and after treatment. Numerous biochemical parameters were monitored during the follow up of nebulized animals and all values were in the physiological range with no differences between the control and the treated group. We have concluded that nebulization of HRC4 peptide does not results with neither toxic nor any visible allergic effect in macaques.

The control animal group presented several clinical signs typical for measles infection, represented by rash in skin and mucosa, while these signs were not observed in the treated group (figure 2). MeV infection was monitored through different parameters such as PBMCs infection, viral RNA in blood and in throat swabs as well as transient leukopenia, characteristic for MeV-induced immunosuppression. All these parameters demonstrated infection in the control group with the peak at day 6 post infection for C3 and at day 9 post infection for C1 and C2. One treated animal (P2) presented some late paucisymptomatic signs of MeV infection. It was housed with control monkey C3, which exhibited a high level of infection and most probably transmitted it as a secondary infection to P2 after the end of the peptide effect, confirming the high contagiousness of MeV infection. Finally, as MeV infection is known to induce life-long immunity we finally characterized the humoral immune response in infected macaques and observed high antibody titers and seroconversion for control group as well as low titers for P2, while other treated animals did not present modifications in B cell responses. Therefore, this study, showed that nebulization of fusion inhibitory HRC4 peptide provides an efficient protection to MeV respiratory infection.

This aerosolization of HRC4 peptide represents a promising anti-measles strategy which holds potential for protecting immunocompromised patients as well as others who cannot receive the live-vaccine. The obtained results suggest the potential of the nebulization approach to protect from airborne infection with other enveloped viruses, including SARS-CoV-2 or highly pathogenic Nipah virus, as well as with newemergent viruses which use similar fusion mechanism for viral entry. In conclusion, this study provides a proof-of-concept for the aerosol delivery of fusion inhibitory peptides to protect against airborne viruses, that can be readily translated to human trials. 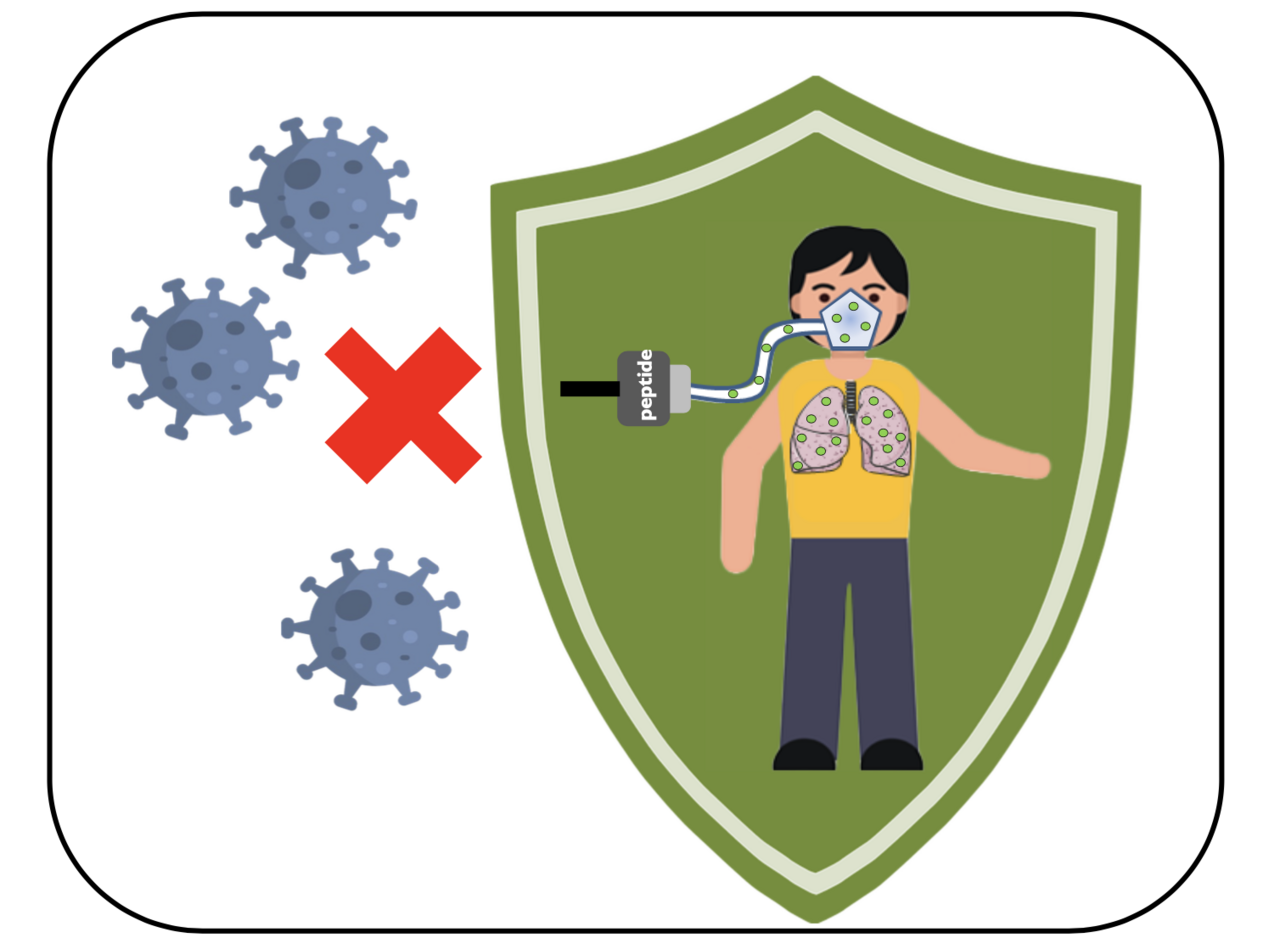