Our recent work published in ISME J shows how the cholera pathogen Vibrio cholerae adapt under long-term predation pressure by amoeba and impact colonization of a eukaryotic host.

+1
Mozammel Hoque and 1 other View all
PhD Student, University of Technology Sydney
Follow 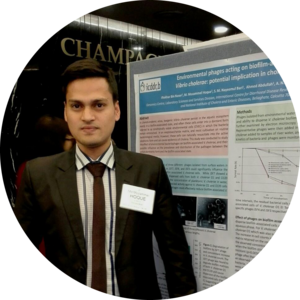 Since the early nineteenth century, seven cholera pandemics have afflicted mankind worldwide [1]. Lack of access to clean water is the major cause but natural disasters and civil conflicts also contribute to the disease, as seen from the recent outbreaks in Asia, Africa, and Latin America [1]. We are currently in the seventh pandemic caused by the bacterial pathogen Vibrio cholerae, which results in 21,000 to 143,000 deaths from 1-4 million cases each year [2].

The ravaging impact of the disease has led to a syncretic deity known as “Ola Bibi” or “Ola Devi” in the past [3]. This character was popular in the oral folklore of Bengal (present days Bangladesh and parts of India) since the beginning of the first cholera pandemic in 1817. The deity was named after “Ola utha” in my native language (Bengali) referring to loose motion (Ola; going downwards) and vomiting (utha; going upwards) as symptoms of cholera. People worshipped the cholera deity in hopes of protection and/or cure from the disease as the common misconception was that it was transmitted by a miasma or bad air. This misconception gradually faded since the famous discovery of the London physician John Snow who found the link between contaminated water and cholera during the third pandemic which ravaged London in 1854 [4].

Cholera in endemic regions like Bangladesh follows a seasonal pattern with two peaks seen each year [5]. I was a researcher at the International Centre for Diarrhoeal Disease Research, Bangladesh (ICDDR,B) and was accustomed to observe temporary extension of the ICDDR,B hospital during those seasonal peak times to accommodate more patients. V. cholerae resides in aquatic habitats between epidemics, where it interacts with numerous biotic agents. How they adapt to survive in the aquatic environment under different stress conditions is a central theme to understand the biology of the cholera pathogen. Bacteria face predation pressure from eukaryotic organisms, e.g. protozoa. Heterotrophic protozoa control bacterial population structure and composition in the environment and also serve as hosts for many opportunistic pathogens. Protozoa also play crucial roles in modulating pathogenic traits [6]. In pursuit of understanding the molecular basis of V. cholerae adaptation under predation stress by protozoa, I began my PhD study in 2018 with Prof. Diane McDougald at the University of Technology Sydney, Australia. This project was funded by the Australian Research Council to determine if increased fitness of bacteria in animal or human hosts (increased virulence) could occur due to indirect rather than direct selective pressure, particularly pressure on bacteria arising from predation by protozoa.

For my PhD project, V. cholerae was adapted with and without the amoebal predator, Acanthamoeba castellanii, over 500 generations. The phenotypic and genetic variations that arose in evolved isolates were identified by phenotypic assays and sequencing. We found that selection pressure leads to the rise of V. cholerae isolates with improved fitness in amoeba compared to the ancestral strain. Phenotypic screening of the adapted and non-adapted isolates revealed remarkable differences in the production of multiple virulence-associated traits which facilitated increased fitness of the adapted isolates. We analysed genomic mutations and saw very few mutations, but did observe a temporal increase in mutational frequency of four mutations in the gene encoding the flagellar transcriptional regulator (flrA) in amoeba-adapted V. cholerae. This indicated that V. cholerae strains with this particular mutation had a selective advantage in the amoeba host during long-term predation stress. These mutations affected highly conserved amino acid residues in the central ATPase domain of FlrA protein, which is involved in regulation of diverse cellular activities. We further showed that that the adapted isolates with point mutations in the flrA gene are aflagellar and exhibit increased colonisation in zebrafish. The altered phenotypes and increased fitness of the amoeba-adapted V. cholerae are indeed due to the mutations in flrA as confirmed with a flrA knock out strain.

Going forward, we will further characterise mechanisms of increased fitness in the flrA mutants. This study shows potential adaptation strategies of V. cholerae in a natural environment and how that might impact the evolution of host-pathogen interactions.

I am a Ph.D. student in the lab of A/Prof. Diane McDougald, at the University of Technology Sydney, Australia. My research focuses on finding molecular mechanisms of adaptation and resistance in pathogenic bacteria against their predators like protozoa and bacteriophages.