Dengue, caused by dengue virus (DENV) infection and mainly transmitted by Aedes mosquitoes, is now considered the most prevalent arboviral disease in human, and it circulates predominantly in tropical and subtropical regions, with more than half the world’s population at its risk. Dengue was listed in "Ten threats to global health in 2019" by the World Health Organization.

Urbanization, climate change, and globalization including rising global tourism are re-shaping the phylogeographic structure of virus populations, possibly contributing to a succession of severe viral pandemics as an unprecedented challenge to global public health. To investigate viral dispersion mechanisms in phylogeography and phylodynamics, various analytical methods and general genotyping methods have been developed for more accurate pathogen identification beyond viral species. Recently, the high-resolution genotyping scheme for surveillance manifested itself to be powerful in rapidly tracking the active lineages and transmission chains of SARS-CoV-2. Even though disease burden assessment and prediction using mosquito ecological data and dengue epidemic data have been investigated globally, there is still lack of a systematic scheme for understanding the DENV population structure, dynamics and mechanisms of cross-national, cross-regional, and even cross-continental transmission in a global profile.

Global genotyping framework of DENV-1 established based on its population structure, phylogeny, and epidemiology.

Figure 1 of the paper by Li et al.

On the other hand, the present study also reminds us to be concerned about the cross-regional and even cross-continental diffusion of DENV-1, which potentially arouse large epidemics, in reference to the stratified spatial-genetic epidemic pairs. For example, several subgenotypes including 5K, 5B, 4F, 5C, 5M and 5N were found spreading across several regions. The cross-regional transmissions were mostly observed in adjacent regions, especially in the regions of Asian or American Continents, but only a few cross-continental transmissions occurred. Collectively, the transmissions of subgenotypes cross countries/regions, on the rise in recent decades, can explain its continuous global expansion to some extent. Therefore, international collaborations based on the framework in promptly pinpointing and periodically updating the hotspots of emerging, transmission, drifting, and replacement of DENV-1 will give rise to cost-effective surveillance strategy for regional and global control of dengue.

In addition, through in-depth explorations of the global transmission pattern of DENV-1 using this framework, we observed that the traditional endemic countries such as Thailand, Vietnam, Indonesia, the Philippines, India, and Brazil apparently displayed as the persisting dominant source centers, while the emerging epidemic countries such as China, Australia, and the USA, where dengue outbreaks were frequently triggered by importation, showed a growing trend of DENV-1 diffusion. Meanwhile, the singletons in subgenotypes (12/41) and clades (63/208) recognized in our study suggest that they may be partially caused by widely deficient surveillance. The probably hidden epidemics were found especially in Africa and India. Then, our framework can be utilized in an accurate daily coordinated surveillance based on the population compositions of its clades and subgenotypes, which is prospectively valuable for hampering the ongoing transition process of epidemic to endemics and addressing the issue of inadequate monitoring.

The genotyping framework and its utilization in quantitatively assessing DENV-1 epidemics has laid a foundation and re-unveiled the urgency for establishing a stratified coordinated surveillance platform for blocking global spreading of dengue. This framework is moreover expected to bridge classical DENV-1 genotyping with genomic epidemiology and even pathogen-mosquito-disease-associated risk modelling. The authors will promote the public availability to the framework and keep periodic updating of it as well.

Graphical abstract of the paper by Li et al. 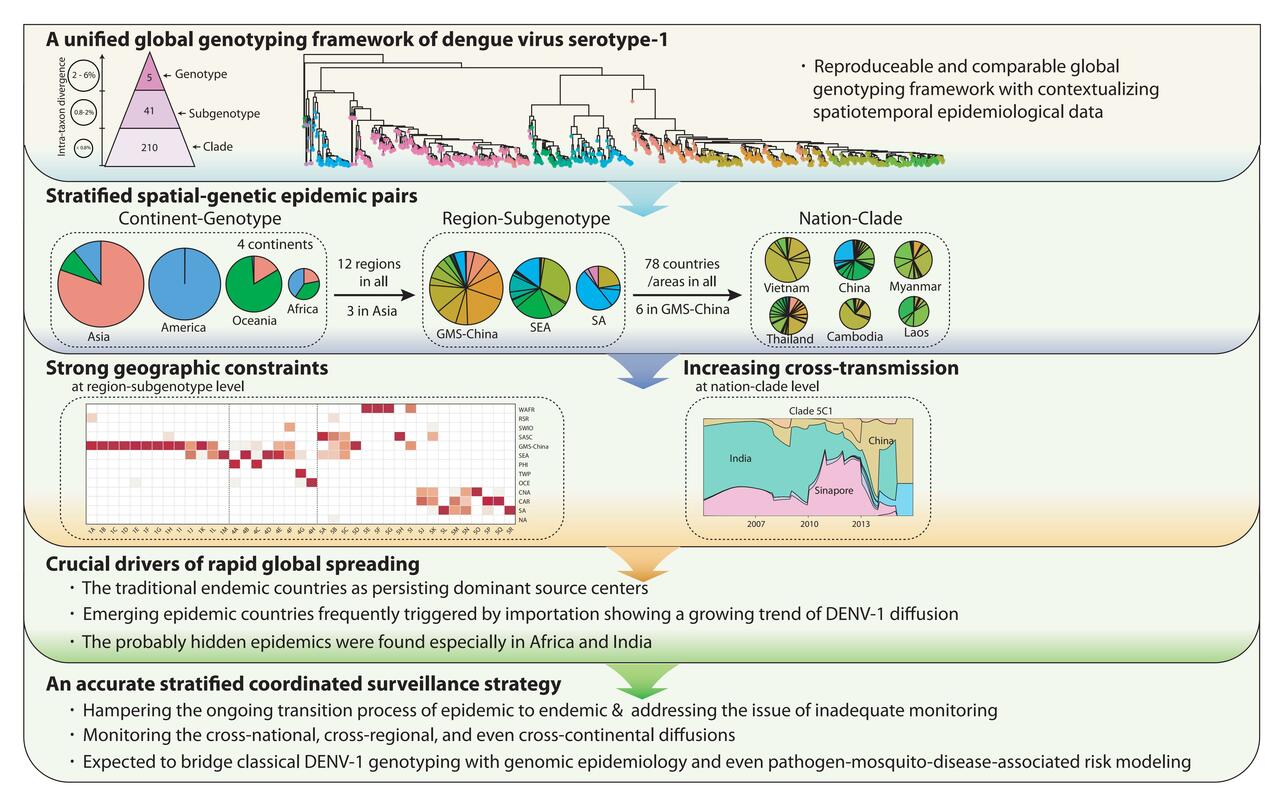