Plant-Growth-Promoting Rhizobacteria (PGPR) have important applications in agriculture. A key prerequisite for those PGPRs to exert beneficial activities is to effectively colonize the roots. Paradoxically, a major challenge for those rhizobacteria is how to migrate from soil to the roots, and further spread along the roots, considering the arid or semi-arid nature of the soil and the root surface. Studies have shown that chemotaxis and swimming motility driven by flagella play an important role in root colonization in aqueous environments. However, one can argue that swimming motility is not productive in the semi-arid or arid soil and root surface. Bacteria may have to reply on certain types of solid surface motility to migrate in the soil and colonize roots. So here comes the simple question: how do bacteria migrate in the soil?

We showed here that Bacillus subtilis, a well-known PGPR, can utilize sucrose, a simple sugar and an abundant root exudate component, as a signal to initiate migration on solid surface. We name it solid surface motility (SSM). This SSM is still flagella-dependent and critically depends on strong production of surfactin, a powerful surface-wetting molecule. Therefore, SSM is different from both swimming and swarming motility, which typically is not effective on solid surface, and flagella-independent sliding motility previously characterized in B. subtilis.

Not surprisingly, a lot of bacteria can utilize sucrose as a carbon source by breaking it up to glucose and fructose. What is interesting here is that B. subtilis possesses a second pathway for sucrose utilization. We name it “levan detour” (Figure 1), in which sucrose is used as a substrate to synthesize a polyfructosan, levan, extracellularly by a levansucrase encoded by a gene in the “levan detour” (Figure 1). Previously, the benefit of this pathway in bacteria was not clear. We discovered that levan can act as a signal to stimulate strong surfactin production and hyperflagellation, which ultimately promotes SSM in B. subtilis. This “levan detour” also provides competitive advantages to B. subtilis in root colonization in the soil alone and when competing with other soil bacteria. Furthermore, Arabidopsis thaliana sucrose secretion defective mutants poorly attract B. subtilis root colonization. Promoting SSM by sucrose was also seen in several other soil bacteria we tested and predicted to have genes for levan biosynthesis, suggesting a wider presence of this pathway in soil bacteria. 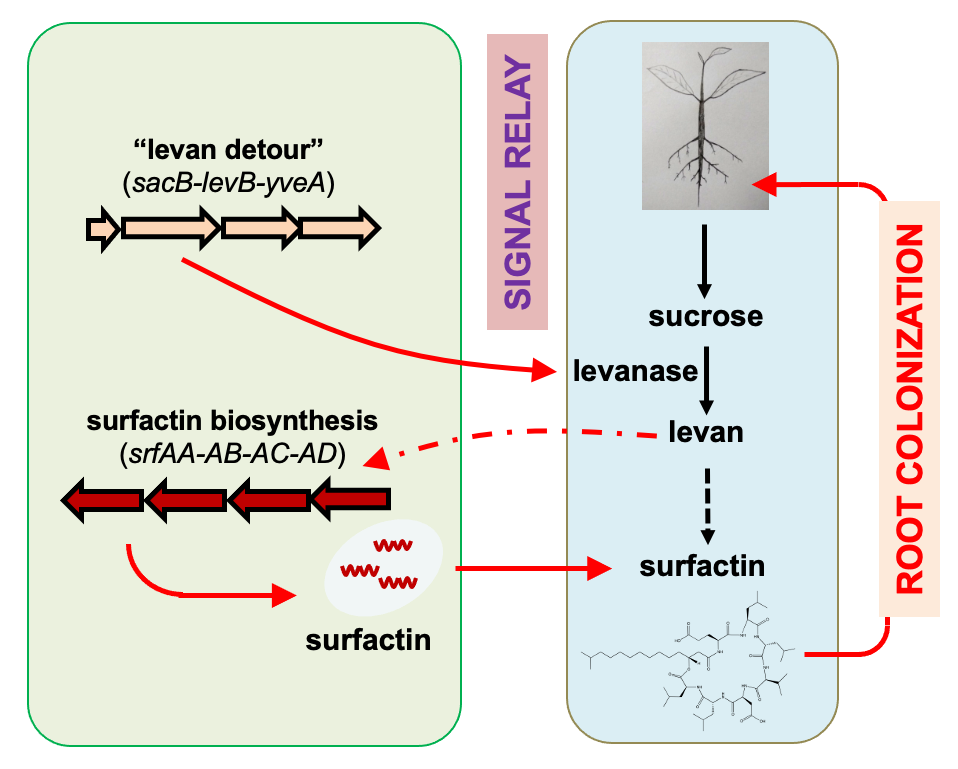 Figure 1.  A cartoon demonstrates a signal relay from sucrose to levan and to surfactin that triggers root colonization by the soil bacterium B. subtilis. Sucrose is converted to levan by a levansucrase (SacB) in the “levan detour”, which then stimulates surfactin production.

Our study presents another example of how plants can actively recruit beneficial bacteria through signaling mechanisms. In plant biology, sucrose is uniquely important since photosynthetic plants primarily use sucrose as a fixed carbon transport and storage mechanism among different tissues. It is plausible that plants may have employed root secretion of sucrose as a general defense mechanism during stress response by selectively enhancing root colonization of sucrose-responsive beneficial bacteria like B. subtilis. On the other hand, Bacillus may have evolved to use sucrose as a unique plant signal that directs root colonization.

Shape matters and matters of shape: the interplay between cell morphology and adaptation to new environments