A pathway for chitin oxidation in marine bacteria - Nature Communications

Lytic polysaccharide monooxygenases contribute to microbial degradation of chitin, but how the resulting oxidized chitooligosaccharides are utilized by microbes is unclear. Here, the authors describe a complete pathway for oxidative chitin utilization in marine bacteria.

Chitin is the most abundant biopolymer after cellulose in nature. The crystalline form of chitin and cellulose makes them resistant to microbial degradation. For a long time in the past, degradation of these complex biomasses was thought to be mainly achieved by hydrolytic enzymes. However, due to the inefficiency in separation of the polysaccharide chain from the crystalline matrix backbone, the activity of glycoside hydrolases is significantly slower on crystalline substrates than on soluble carbohydrate chains1. The discovery of lytic polysaccharide monooxygenases (LPMOs) by Vaaje-Kolstad et al. in 2010 changed our idea that depolymerization of recalcitrant polysaccharides is achieved exclusively by hydrolytic enzymes2. LPMOs are copper-dependent enzymes that oxidize the surfaces of crystalline polysaccharides to generate “nicks”, allowing canonical hydrolytic enzymes to depolymerize complex biomass more efficiently. Moreover, recent studies suggested that LPMOs tend to be peroxygenases, which exhibit much faster catalytic rates in H2O2-driven reactions than in O2-driven reactions3-6.

Oxidative degradation initiated by LPMOs plays a pivotal role in the efficient bioconversion of complex biomass. In addition to chitin and cellulose, LPMOs have been reported to cleave other polysaccharides including starch, xylan and pectin. Up to date, the studies on oxidative degradation of carbohydrate biomass are still limited, mainly focusing on the functional identification of LPMOs and the clarification of their underlying catalytic mechanisms. In contrast to the well-established hydrolytic utilization pathways for these polysaccharides (excluding pectin), the oxidative utilization pathways of these polysaccharides but LPMOs in organisms remain poorly studied.

Different from cellulose, starch and other polysaccharides, chitin is a kind of amino sugar composed of β-1,4 linked N-acetyl-D-glucosamine (GlcNAc), which provides large quantities of carbon and nitrogen sources for bacterial growth. Chitin-degrading LPMOs are abundant in marine and terrestrial bacteria. All characterized chitin-active LPMOs can only oxidize chitin to produce C1-oxidized chitooligosaccharides with a terminal 2-(acetylamino)-2-deoxy-D-gluconic acid (GlcNAc1A), which is more similar to N-acetyl-D-amino acids than GlcNAc in terms of chemical structure and charge. However, how the oxidized chitooligosaccharides released from chitin due to the action of LPMOs are further utilized by bacteria is still unknown. Moreover, the contribution of oxidative degradation to environmental chitin degradation is also unclear. 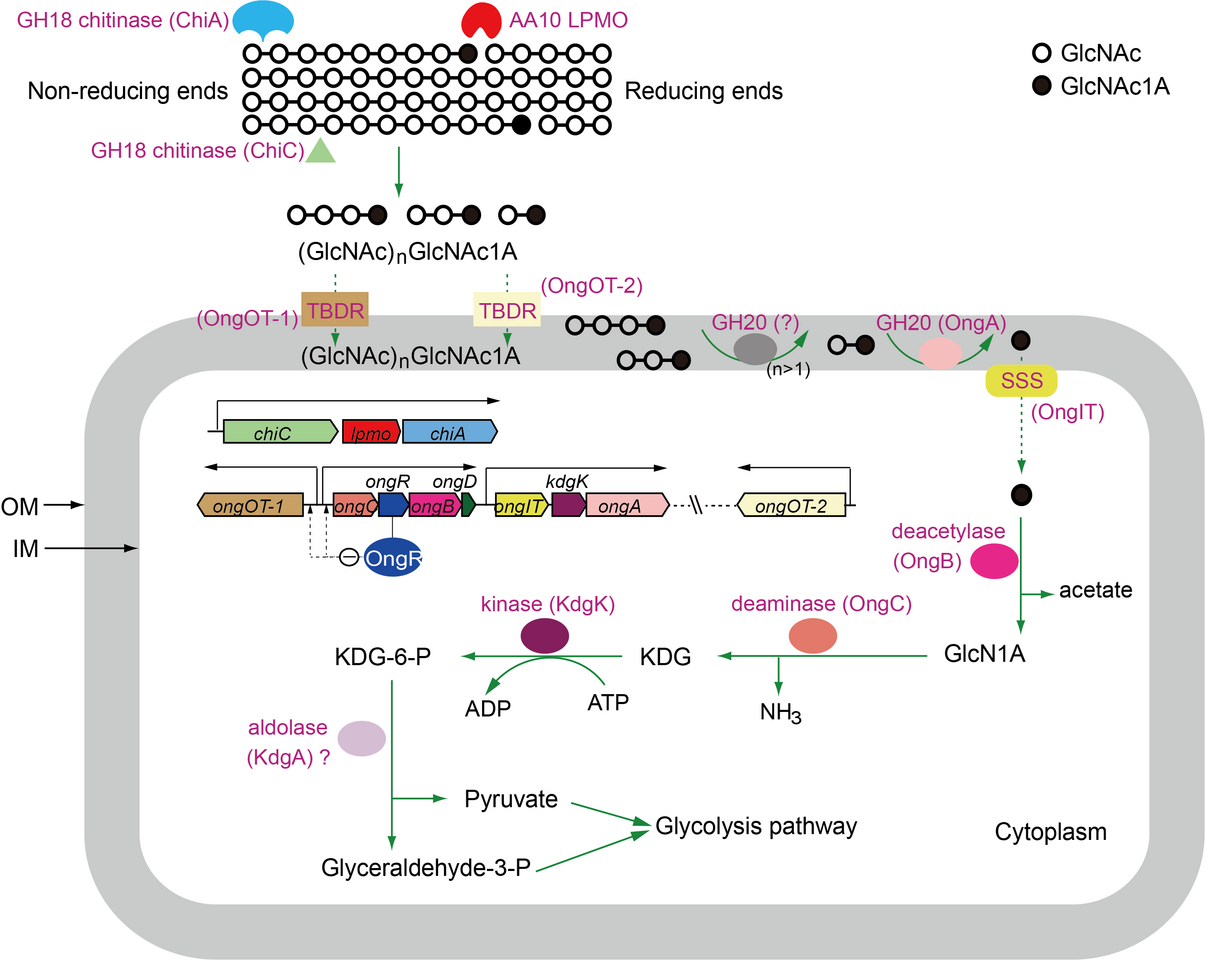