Bacteria requiring a specific diet are able to transiently colonize mosquito larvae and allow the production of germ-free mosquitoes, expanding the possibilities for studying the role of microorganisms in mosquito development and pathogen transmission.
Mathilde Gendrin and Ottavia Romoli
2 contributors
Like Liked by Laura V. Flórez
0

Mosquitoes are often described as the deadliest animals on earth, as they transmit a number of infectious diseases. Aedes aegypti in particular is the main vector of several viruses representing important burdens to human health, including dengue and Zika viruses. When a mosquito bites someone to ingest their blood, it may also acquire such viruses if the person is infected. The great majority of these viral particles are killed in the mosquito gut, notably by its immune system. A small proportion, however, escape this barrier, multiply in the mosquito body and can eventually be transmitted to healthy humans during subsequent blood meals.

In the past fifteen years, it has become clear that the microbes that colonize the mosquito play a fundamental role in defining the fate of the pathogen in the mosquito gut. This community of microorganisms or microbiota might facilitate or block the development of the pathogen in the mosquito body (and therefore its probability to be transmitted). For instance, the bacterium Enterobacter Esp_Z has shown anti-malarial properties through the inhibition of the malaria parasites’ anti-oxidant response (1), while Serratia marcescens produces an enzyme which digests the mucus layer in the mosquito gut, rendering it more permeable to dengue virus infection (2). But the microbiota more generally influences several aspects of mosquito biology, having an additional effect on its reproduction, behavior, survival and therefore on the general success of the mosquito population.

Germ-free animal models, devoid of any microbiota, have become the linchpin of the study of host-microbiota interactions. Establishing germ-free mosquitoes is however particularly challenging, as a living microbiota is required for their normal development (3). If mosquito eggs are microbiologically sterilized, the hatched larvae are not able to grow in the absence of bacteria when provided sterile usual diet (Fig. 1a). To study the mosquito microbiota, microbiota-deprived individuals could be obtained only by antibiotic treatments, which are not completely efficient, or by specific sterile diets, which produce stalled individuals (4).

In our Nature Communications paper led by Dr Ottavia Romoli, we describe a method based on transient bacterial colonization to obtain germ-free Ae. aegypti without any developmental deficit. This method was previously set-up in mice (5) and it is based on the use of genetically modified bacteria (Escherichia coli) requiring two bacteria-specific nutrients to grow. When these bacteria are provided to mosquito larvae together with these essential molecules, the larval development is rescued (Fig. 1b). When the essential nutrients are removed from the larval rearing environment, bacterial growth is blocked and mosquitoes become germ-free. Using this method, switching-off of the mosquito microbiota is possible at any time during larval and adult stages (Fig. 1c).

When clicking the switch at the end of development, we found that this genetically-modified bacterium supports mosquito development as well as its wild-type control, and produces adults without any specific impairment on fertility or lifespan. We also turned off the microbiota in the middle of larval development to investigate why it is so important to larvae. We found that bacteria contribute to mosquito development by providing vitamins, notably folate, and by increasing the energy storage of lipids and proteins.

We believe that this method will allow further investigation of the fascinating role of the microbiota on mosquito fitness, and of the interactions between the microbiota and the different pathogens that the mosquito can transmit. 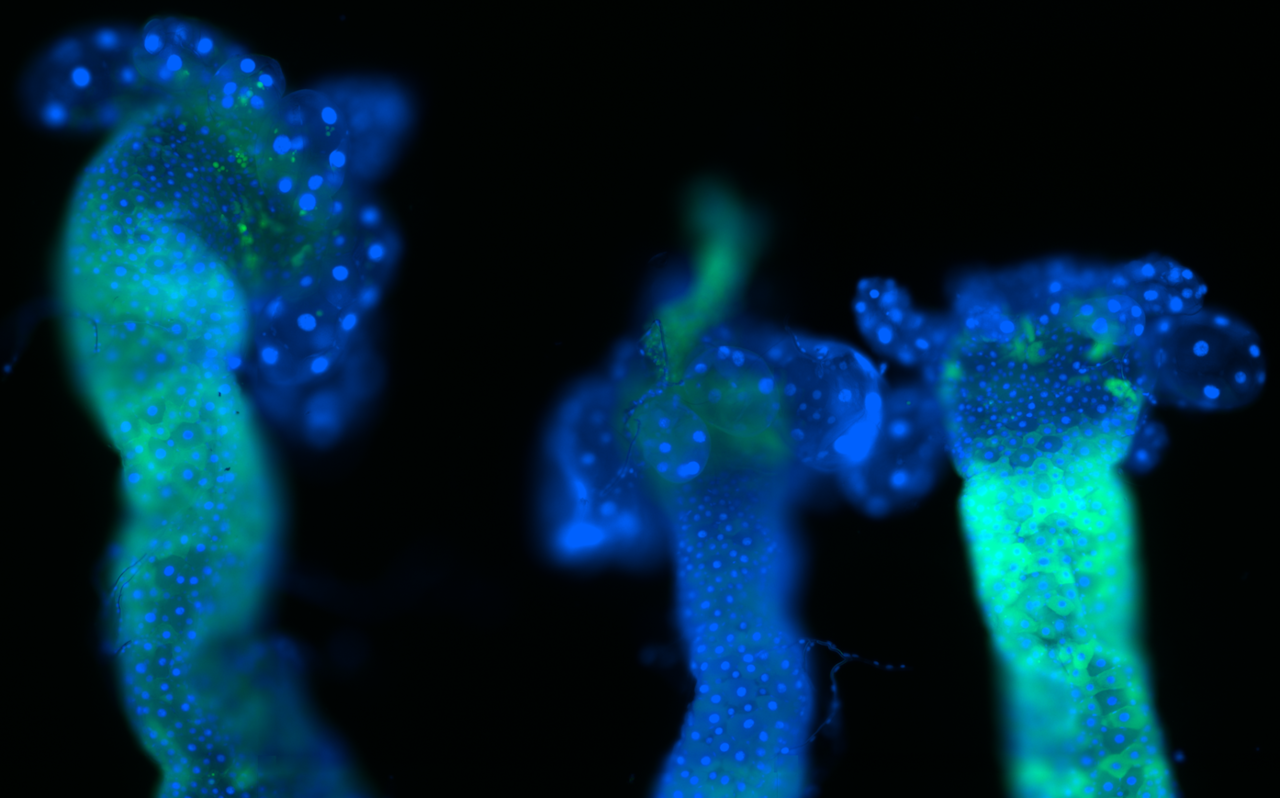 Bacteria requiring a specific diet are able to transiently colonize mosquito larvae and allow the production of germ-free mosquitoes, expanding the possibilities for studying the role of microorganisms in mosquito development and pathogen transmission.