Synthesis of lipopolysaccharides, essential components for most gram-negative bacteria, is under tight control. Here, authors use in vitro reconstitution and structural approaches to elucidate some of these regulatory mechanisms involving essential membrane proteins LapB and YejM.

Gram-negative bacteria use lipopolysaccharide (LPS), a unique glycolipid on their cell surface, to form a unique barrier against toxins. Through multiple reactions, LPS is synthesized on the cytoplasmic side of the inner membrane, flipped to the periplasmic side, and then transported to the outer membrane. Trained as a postdoctoral fellow in Dr. Maofu Liao’s lab at Harvard Medical School, I came into the LPS field by determining the cryo-electron microscopy (cryoEM) structures of MsbA, a specific flippase that assists LPS transport. Our cryoEM structures revealed how MsbA specifically recognizes LPS and led to our novel model of how LPS is flipped within the inner membrane. Compared with well studied LPS synthesis and transport, little is know about how LPS synthesis is regulated. We were curious to understand how bacteria regulate LPS synthesis, a process with great potential for the development of new classes of antibiotics that confront bacteria without increasing antibacterial resistance.

Based on this MsbA work, I was thrilled to join the Department of Pharmacology at Yale University in 2019 as an assistant professor. Shortly after we filled our empty lab space with instruments, COVID-19 hit campus, and Yale closed most laboratories for three months. As a new principal investigator, I was actively looking for a niche for my lab and used this break to read papers and find a new direction. Fortunately, in April and May 2020, Tom Silhavy and Tom Bernhardt published two papers in mBio. Their labs had independently exploited genetic approaches to reveal that YejM, an essential membrane protein in Escherichia coli, is a regulator of LPS synthesis. For E. coli and many enteric bacteria, synthesizing the right amount of LPS is a matter of life and death: too little LPS fails to offer protection, but too much LPS kills the bacterium. In E. coli, LPS synthesis is therefore under tight control achieved by regulating the protein levels of LpxC, an enzyme that catalyzes the first committed step of LPS synthesis. LpxC is degraded by the membrane-bound protease FtsH, and intriguingly, two membrane proteins – LapB and YejM – specifically regulate FtsH protease activity toward LpxC, while other substrates of FtsH are not affected. The genetic results provided compelling evidence that LapB stimulates and YejM inhibits FtsH protease, but how these proteins specifically regulate FtsH activity on LpxC and how LpxC degradation adjusts based on LPS levels were not clear at that time. My gut feeling was that my training in biochemistry and structural biology would place me in a unique position to answer these questions.

As soon as Yale allowed people back to work in the lab, my first postdoc, Sheng Shu, and I jumped in this exciting new direction – regulation of LPS synthesis. I will be forever grateful that Sheng and I embarked together, as Sheng has golden hands and was the perfect scientist to establish the in vitro reconstitution needed to investigate these mechanisms. Sheng first purified all proteins involved in LpxC degradation and mixed them in a test tube. By taking samples at different time points and running them on SDS-PAGE, he observed that bands of LpxC disappeared faster in the reactions with LapB than those without LapB, validating that LapB stimulates LpxC degradation. To further investigate the underlying mechanisms, we needed to study the kinetics of LpxC degradation. However, there was no assay available to accurately monitor the LpxC degradation rate. We came up with the idea to covalently label LpxC with a fluorophore and measure its initial degradation rate by monitoring the fluorescent signal from digestion products. After overcoming several technical challenges, Sheng successfully established in vitro reconstitution of LpxC degradation and fit the initial degradation rates into Michaelis-Menten curves. These kinetic studies showed that LapB increases the binding affinity between FtsH and LpxC and is therefore an adaptor protein specifically stimulating LpxC degradation.

From genetic analysis, it seemed that YejM acts upstream of LapB and that YejM interacts with LapB but not with FtsH. We first thought that YejM/LapB/FtsH forms a ternary complex, with LapB sitting in the middle to bridge YejM and FtsH. Sheng overexpressed these three proteins simultaneously, hoping to purify the YejM/LapB/FtsH complex. However, his purification results showed that only YejM and LapB form a stable complex, suggesting that YejM competes with FtsH for LapB. So we proposed a new hypothesis that YejM takes LapB away from FtsH, thus slowing down LpxC degradation. A couple of weeks later, the YejM/LPS complex structure was published in Nature, indicating that YejM is an LPS sensor. We then speculated that a second competition exists: LPS and LapB compete for YejM. A model of how LPS is sensed and regulates LpxC degradation was emerging! To test our model, we set out to determine the structure of the newly purified YejM/LapB complex. The first cryoEM dataset gave us a map at ~ 6-7 Å resolution, with distinguishable transmembrane helices. After docking the YejM/LPS crystal structure into our YejM/LapB cryoEM map, it became clear that LPS and LapB share overlapping binding sites in YejM, clearly supporting our hypothesis that LPS and LapB compete for YejM. That was such a rewarding moment for us!

With several months’ effort, we improved the resolution of the YejM/LapB map, which allowed us to observe side chains and pinpoint their interactions. To our surprise, we observed phospholipids at the interfaces. It has been known for decades that phospholipid and LPS synthesis are strictly coupled, and the dominant theory to explain the coupling of the two pathways has been that LPS and phospholipids share a common substrate. Our YejM/LapB structure indicates this coupling is more complicated than that. Very likely, YejM is a sensor for phospholipids to regulate LPS synthesis! This is an exciting possibility worthy of further exploration. We were glad that our biochemical and structural analysis not only provided mechanistic insights into the genetic results but also pointed to a new potential function of YejM. We believe we are just at the start of our journey toward understanding the complex network of LPS regulation, and many exciting discoveries await. 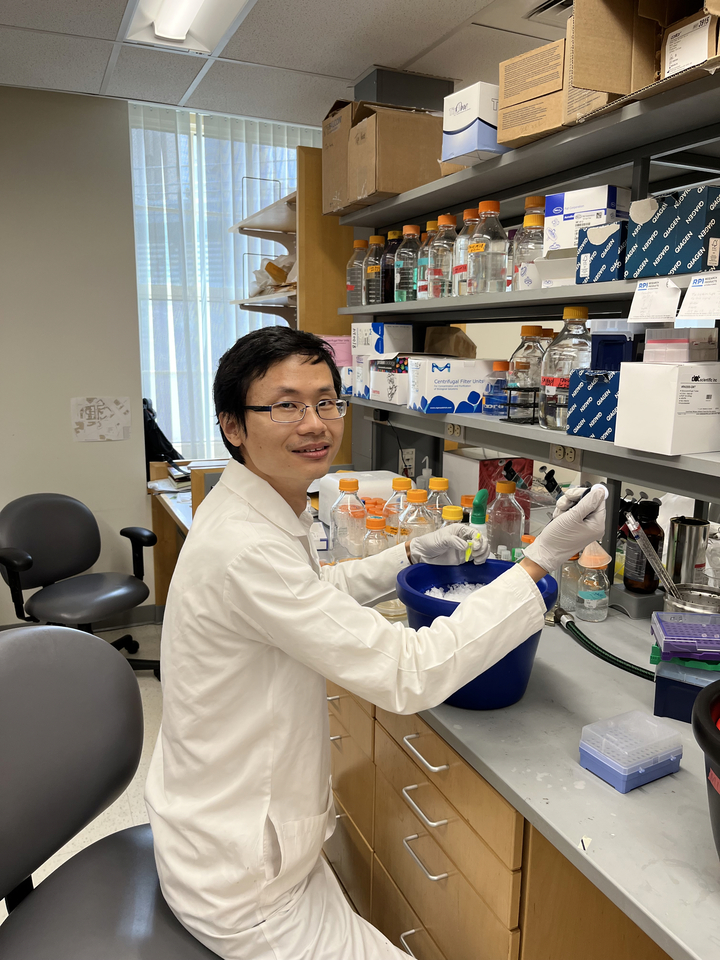 Novel molecule insights into LPS regulation in bacteria expose new targets for the development of antibiotics that sidestep antibacterial resistance.