Coral reefs are the most biodiverse marine ecosystems on the planet. Their productivity and biomass depends on a functional symbiosis between the coral (an invertebrate) and photosynthetic algae, which are dinoflagellates of the genus Symbiodinium. The symbionts supplement the corals´ diet by transferring fixed carbon to their host. In return, the dinoflagellates receive inorganic nutrients to fuel their metabolism. Yet much remains unknown about the molecular mechanisms underlying the tight interaction of these two eukaryotic organisms.

What makes corals so difficult to study?

Cultivating corals under standard laboratory conditions is not easy, especially in comparison to other animal model systems. They require high water quality and constant flow and are therefore easily kept at tropical marine stations with nearby access to natural seawater and coral reefs, but it is expensive to recapitulate the necessary growth conditions in labs remote from these conditions. A second drawback is that corals grow very slowly and, because they only reproduce once a year in a mass spawning event, access to coral embryos is limited. This impedes classical genetic approaches and studies of coral development, larval biology and symbiosis establishment.

Aiptasia is a sea anemone – what makes it an appropriate model for studying coral biology?

Aiptasia is closely related to corals and the organisms share many features. For example, Aiptasia establishes symbiosis with the same types of photosynthetic dinoflagellates (Symbiodinium species) as corals, even with some that have been directly isolated from corals. As with many reef-building corals, Aiptasia produces non-symbiotic larvae that have to acquire symbionts from the environment by phagocytosis. Both adults and larvae prefer some symbiont types over others; this phenomenon is known as symbiosis specificity in corals, and it has been implicated in host physiology and adaptation capabilities.

However, Aiptasia has distinct advantages over corals for research scientists. It’s possible to induce sexual reproduction in the lab, giving us regular access to larvae, and the anemones also undergo efficient asexual reproduction, which allows us to easily maintain and expand clonal lines.

The theme of this year’s World Ocean’s Day is ‘Healthy oceans, healthy planets’. One of the best-known signs of an unhealthy ocean is bleaching of coral reefs. What exactly is bleaching?

Bleaching is the loss of symbionts in corals — without the coloured dinoflagellates, the corals’ white skeletons are visible through their transparent tissue. Bleaching is a symptom of stress from one or more sources, including high temperature, pollution and disease. For example, the recent mass bleaching events on the Great Barrier Reef have been driven largely by El Niño-caused warming. Corals can recover from bleaching, but they will die if the stress is severe or prolonged.

And do Aiptasia also lose their symbionts when stressed?

Yes! And we can induce this in the lab by increasing the water temperature. Several groups are using Aiptasia to study pathways of coral bleaching. We can also render Aiptasia symbiont-free through cold shock and chemicals that interfere with symbiont photosynthesis, and we use these ‘aposymbiotic’ anemones for experiments such as re-infection with distinct symbiont cultures.

Are there any data from Aiptasia that have already helped us understand coral bleaching or other aspects of ocean health?

Yes. A study by researchers from Stanford University (Curr. Biol. 2013 doi: 10.1016/j.cub.2013.07.041) showed that in both laboratory-reared Aiptasia and field-collected corals, bleaching occurs at elevated temperature in the dark. This was surprising because the common belief was that the release of some toxic by-products from heat-damaged photopigments during photosynthesis, which only occurs in the presence of light, is the primary cause of bleaching. This work demonstrates the value of Aiptasia as a model system to investigate the common molecular principles underpinning the symbiosis.

What other questions are scientists studying using Aiptasia as a model system?

In addition to bleaching, scientists are using Aiptasia to analyse symbiosis establishment; the steady state of the symbiotic interaction encompassing metabolic exchange; and cellular communication between the host and symbionts. The Aiptasia genome has recently been sequenced, providing the foundation for molecular analysis. In addition to research directly related to symbiosis, researchers are also beginning to use Aiptasia to study adaptation to environmental change and in ecotoxicology.

What can’t these anemones do in terms of modelling corals?

As sea anemones, Aiptasia have no calcareous skeleton and therefore aren’t an appropriate model for coral calcification, a key process for coral growth and the formation of massive coral reef ecosystems. They also live as solitary polyps (single anemones), and thus don’t mimic inter-polyp signalling as in colonial corals.

You’ve just been in Japan for a field trip. What were you studying there?

For the second year in a row, we were in Okinawa for the annual mass spawning to collect coral larvae for comparative experiments (the photo shows Liz and Annika at work in Okinawa). From our trip last year, we found that larvae of Aiptasia and Acropora (a major reef-building coral) have similar patterns of symbiosis establishment. This trip, we used coral larvae for transcriptomics of symbiosis establishment and also sampled adult corals, their extracted symbionts and coral larvae for comparative data in our project investigating sterols and their role in the symbiosis. 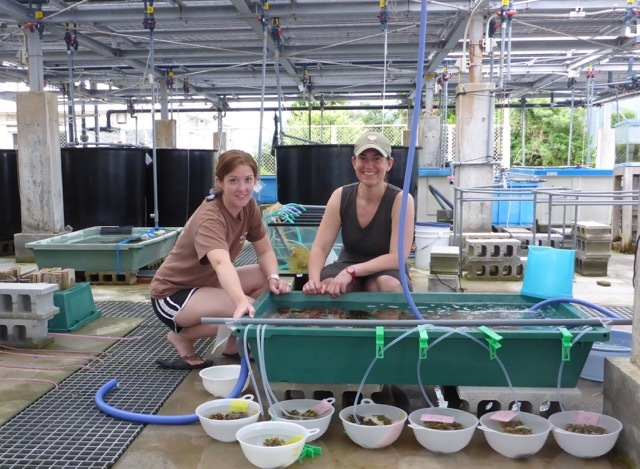 Researchers in the Guse group at Heidelberg University in Germany (http://guselab.de/) are using sea anemones to investigate coral biology. A Q&A with Annika Guse & Liz Hambleton.