Dr Samantha Joye of the University of Georgia, USA, shares her experiences in working in the marine sciences 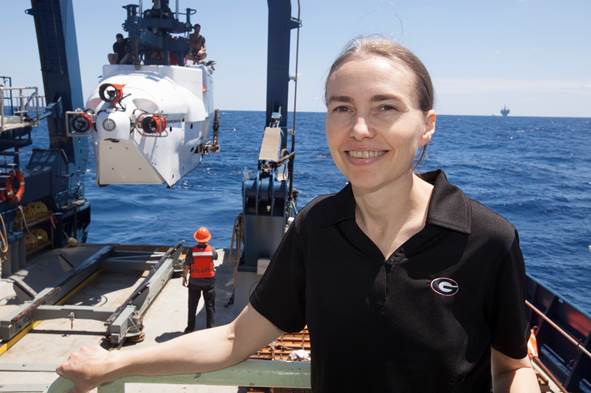 I am an oceanographer who studies the microorganisms that inhabit deep ocean environments, living in sediments, authigenic mineral deposits, and in the water column. The oceans cover 70% of Earth but the deep ocean has barely been explored. The deep seabed is home to extreme environments created by expulsion of deeply sourced anoxic fluids that can be hot or luke-warm, oily and/or gassy, laden with hydrogen sulfide, or super salty. These are my favorite places! At these seeps and vents, energy rich fluids leak from the seabed and interact with shallow sediments and bottom waters. Fluid seepage creates steep and dynamic chemical gradients that fuel diverse microbial populations that are the base of the food web and the geobiological engines of the habitat. Many mysteries regarding the diversity, environmental regulation, and metabolic capabilities of these microbial populations remain to be revealed. Through doing my job, I am able to explore and discover incredible things at the frontier of deep ocean science.

My love of, and fascination with, the oceans goes back as far as I can remember. I got a microscope for my birthday when I was 9 or 10 years old and spent hours upon hours looking at the little critters living in water through those – to me – very powerful (10X!) lenses. I found it completely fascinating but I never really considered marine science/oceanography as a career until my junior year in college. At that point, I was a pre-med/biology major. Spring semester, I took an elective course in marine science. The professor was an incredibly knowledgeable and funny man whose enthusiasm lit a fire in my mind. I was hooked on marine science and I knew that being an oceanographer was my calling. I never looked back and now, I try to do what that Professor, Conrad Neumann, did for me: inspire young kids and college students to pursue oceanography as a career.

The microbes in the oceans are, collectively, responsible for creating and maintaining Earth’s status as a habitable planet. We know that ocean microbes produce ~half (or more) of the oxygen that humans and other animals breathe; they mediate elemental cycles, recycling carbon and nutrients promoting sequestration and mobilization of key chemical species; and, their activities reduce nutrient pollution. But, there is so much more about these microorganisms that we don’t know. We do not have a grasp of their diversity…new microbial species, classes, and families are discovered all the time. We do not understand the metabolic potential of individual microorganisms, much less diverse microbial communities. Studying how microbes shape and interact with their environment fascinates me. Marine microbiology is a frontier field, ripe with opportunities for discovery, exploration and advancing knowledge.

The oceans are changing rapidly in response to increasing atmospheric carbon dioxide and increasing temperatures. These changes put the oceans – and the Earth system – in extreme peril. It’s clear that species we’ve yet to even discover could be lost to extinction due to the stressors humans are imparting on the system. Microorganisms multiply quickly and have the potential to respond to changing conditions faster than organisms with longer generation times. Microorganisms also have the capacity to respond and react and potentially help improve conditions in the oceans. Variations in microbial populations could also serve as sentinels of change/perturbation, if we are able to decipher those signals. Some microorganisms in the oceans are sure to hold undiscovered metabolisms and biochemicals that could advance biotechnology and medicine. Discovery based studies of marine microbial populations will undoubtedly provide opportunities to improve ocean and earth health, which makes it a great time to be a marine microbiologist!

Healthy oceans not only make a healthy Earth, healthy oceans are absolutely critical for human survival. The oceans modulate Earth’s climate system, her biogeochemical cycles, and host enormous biodiversity. Some view the oceans as being so vast and powerful that they are immune from human impacts; they are not. Human impacts are making the oceans hotter, more acidic, and creating large swaths of water containing low oxygen concentrations that can be inhospitable to large animal life. To preserve the future, we must make the oceans healthy again, top to bottom. We must stop pollution; restore biodiversity; and protect endangered animals (i.e. whales and fish populations that are highly stressed) that are critical for healthy, well-functioning oceans. We can do this, but success requires everyone to realize how humans are impacting the oceans, to take ownership of this, for individuals to take action(s) to help improve ocean health, and for each of us to educate others about how to restore ocean health. Healthy Oceans = Healthy Planet = Sustainable Future for Humans. It’s imperative that we act now; it all starts with educating people about the oceans and informing and empowering people to work to make a difference.