As I sit in my ferociously air-conditioned office, enviously watching the emerging London summer, thoughts drift to sandy beaches and sparkling oceans. Having grown up in north Devon, in the UK’s southwest, I’ve experienced my fair share of trips to the pristine seaside. Unfortunately, in reality, the perfect beaches I recall as a child are becoming fewer, as plastic debris increasingly accumulate along the sandy shores. With 12.7 million metric tons of plastic estimated to enter the ocean annually, clogged seaways and littered coasts are becoming a familiar picture the world over [1]. It would appear, however, that the waste that accumulates along our shores is the least of our worries; the fate of the plastic that remains among the ocean waves is much darker indeed.

While it often begins with bulky items such as Coca-Cola bottles (plastic waste from other carbonated drink manufacturers is also available) and polystyrene takeaway containers; through photodegradation and other weathering processes, these items gradually fragment, disperse, and accumulate as microplastic (fragments smaller than 5 mm) soups in the sluggish rotating gyres that occupy our ocean’s centres [2]. A minimum of 5.25 trillion particles weighing nearly 269,000 tons are thought to currently populate our oceans [3]. These tiny, multi-coloured particles have even been found in the previously pristine polar oceans [4], and frozen within sea-ice at the top of the world [5]. While the reported concentrations are difficult to fathom, this only represents 0.1% of annual global plastic production, and recent studies report a surprising lack of microplastics in surface waters, causing researcher to ask the question: where has all the plastic gone? The answer, in retrospect is simple: down. Recent analyses of deep sea sediments collected from the Atlantic Ocean, Indian Ocean and Mediterranean Sea revealed microplastic concentrations four orders of magnitude greater (per unit volume) than those in the contaminated surface waters [6], emphasising the magnitude of the damage already inflicted upon our oceans.

The story of how these buoyant materials were transported to these depths is even more disturbing. Evidence has emerged that these plastic particles are being munched on by zooplankton, tiny marine crustaceans that make up the base of the food chain [7]. The tiny beasts, being of very little brain, mistake the similarly size microplastics for their food of choice: diatoms, and as this (slightly terrifying) video shows, they happily fill their guts: https://www.youtube.com/watch?v=mGzIz9Ld-sE). As always, what goes in must come out, and it does so in the form compact faecal pellets, which, denser than the individual particles, provide a route by which the buoyant plastic can be removed to the sediments below [8].

The greater concern this behaviour provokes is that it enables the propagation of microplastics up the food chain. Microplastics have already been observed in the stomachs of Bluefin tuna and swordfish, and zooplankton, via krill, provide a direct plastic-packed cascade to baleen whales. It is estimated that a humpback whale could ingest more than 300,000 microplastic particles per day [7]. Once ingested these plastics can fill guts and choke fish, slow growth rate and deform offspring. Even more concerning is that some larval fish have started to demonstrate a preference for microplastic, ignoring their natural food source in its presence. Larval perch have been observed to dismiss zooplankton in order to chow-down on plastic treats. As a result, the fish become sluggish and ignore the threat of predators. While these stupid fish perhaps deserve to be eaten, this again effectively propagates the plastic up the food chain [9].

It was originally argued that the threat to humans was small, as we tend to prefer juicer fish fillets over plastic clogged fish guts (fair point). However, both oysters and mussels are reported to incorporate microplastics into their soft tissues, which can be directly passed on to humans, at an estimated rate of 11,000 microplastics per year [10]. The concerns don’t stop there: Microplastics are also known to absorb toxic chemicals, although the extent to which these chemicals contaminate the consumer, be them fish or humans, remains unknown.

Tackling this global contamination is no easy task. There has been a great deal of recent news regarding the banning of manmade microplastics – plastic beads that are added to cosmetics and body washes as exfoliators. These tend to avoid removal in water treatment works and are flushed into the ocean where they can contamination the environment. The USA has already committed to phasing these beads out, and the UK and Europe are likely to follow suit. However, while this is indeed an important step, this will not solve plastic pollution on the larger scale. Many of the studies referenced above, primarily observed fragmented, rather than manmade, microplastic, and it is argued that policymakers must think bigger. A shift in the way we use and consider plastics is essential. If we don’t act soon, our beautiful blue planet is likely to become choked in multi-colour. 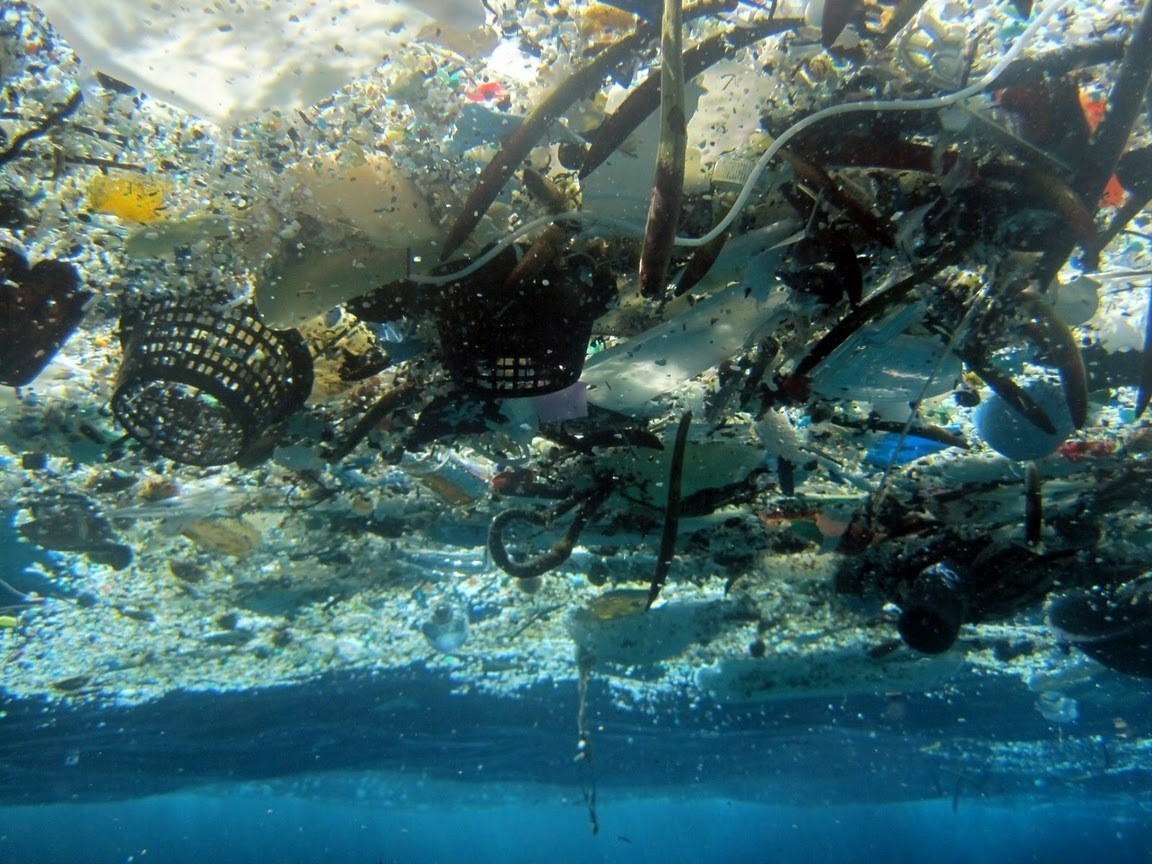 The escalating problem of microplastic pollution