Defining the cellular tropism of a virus is a critical step to understanding its pathogenesis. We set out to answer this seemingly straightforward question for astroviruses, enteric viruses that cause diarrhea, and in the process discovered much more about the virus, host, and microbiome.
Valerie Cortez
Postdoctoral Research Associate, St. Jude Children's Research Hospital
Follow
Like Liked by Ruth Milne
0

Astroviruses are the leading cause of pediatric diarrhea, but which cells are the main targets in the gut remains unclear. Here, using an in vivo model of murine astrovirus, the authors show that the virus infects goblet cells and that this alters mucus production and increases mucus-associated bact…

Astroviruses are small, RNA viruses that make up the family, Astroviridae. Human astroviruses are a leading cause of pediatric diarrhea worldwide, but little is understood about where they replicate in the gut and what cell types are infected by the virus. While prior studies have shown that the virus can infect intestinal epithelial cells in vitro, no study has closely examined their tropism or host response in vivo. To address this question, we used our previously characterized murine astrovirus model in wildtype C57BL/6 mice. With the sole goal of identifying the target cell for astrovirus, we (@SSCLabQuips @VirologistVal) discovered that viral infection altered the mucus barrier, microbiome, and susceptibility to pathogenic bacteria.

The title is a bit of a give-away as it turns out that goblet cells, the main cells in the gut that produce the mucus barrier, are also the main producers of murine astrovirus. We used a murine astrovirus-specific in situ hybridization probe to visualize this initial discovery, but we next wanted to confirm it via a secondary method. Unfortunately, goblet cells are rare and only make up 4-10% of epithelial cells that line the villi of the small intestine and based on the staining pattern, only a subset of goblet cells were productively infected. Thus, we were faced with a challenge, how does one study a minority of a minority cell population? Partnering up with Paul Thomas’ Lab (@PGTImmune), we used single-cell RNA sequencing to confirm that goblet cells were indeed the epithelial cell population targeted by murine astrovirus.

While the surprise of this goblet cell discovery failed to wear off, upon further reflection, this actually made sense with what we know about this virus-- unlike other enteric viruses that cause diarrhea, astroviruses do not cause cell death or inflammation and they are thought to exit the cell via a non-lytic mechanism. In fact, what became clear from the single-cell data was that the virus specifically targeted goblet cells that were actively secreting mucus, hinting that the virus may be co-opting this pathway for egress. We initially thought that the virus would disrupt mucus production, which could be detrimental for the host, as mucus barrier defects are a hallmark of inflammatory bowel disease. Instead, we observed higher transcripts of mucus associated genes and a thicker mucus barrier at peak infection, when the cells are churning out virus. This even translated to fincreased mucus-associated commensal bacteria and a reduced susceptibility to an adherent bacterial pathogen, enteropathogenic E. coli.

Overall this study highlights a new means by which an enteric virus can co-opt its host and induce functional changes to the gut mucosa. Numerous follow up questions now arise from both the virus and host perspectives. First, does the virus use the same mucus secretory machinery for viral egress? Could infection drive goblet cell exhaustion after peak infection? Does the association of virus with mucus lead to a suboptimal immune response? Is it possible that infection alters mucin structure and this drives transcriptional changes in mucus and non-mucus degraders? Finally, do these virus-induced changes to the host and microbiota dictate the disease course of infection? These are just a few directions I plan to take as I build my independent research program around this unusual and understudied enteric pathogen. 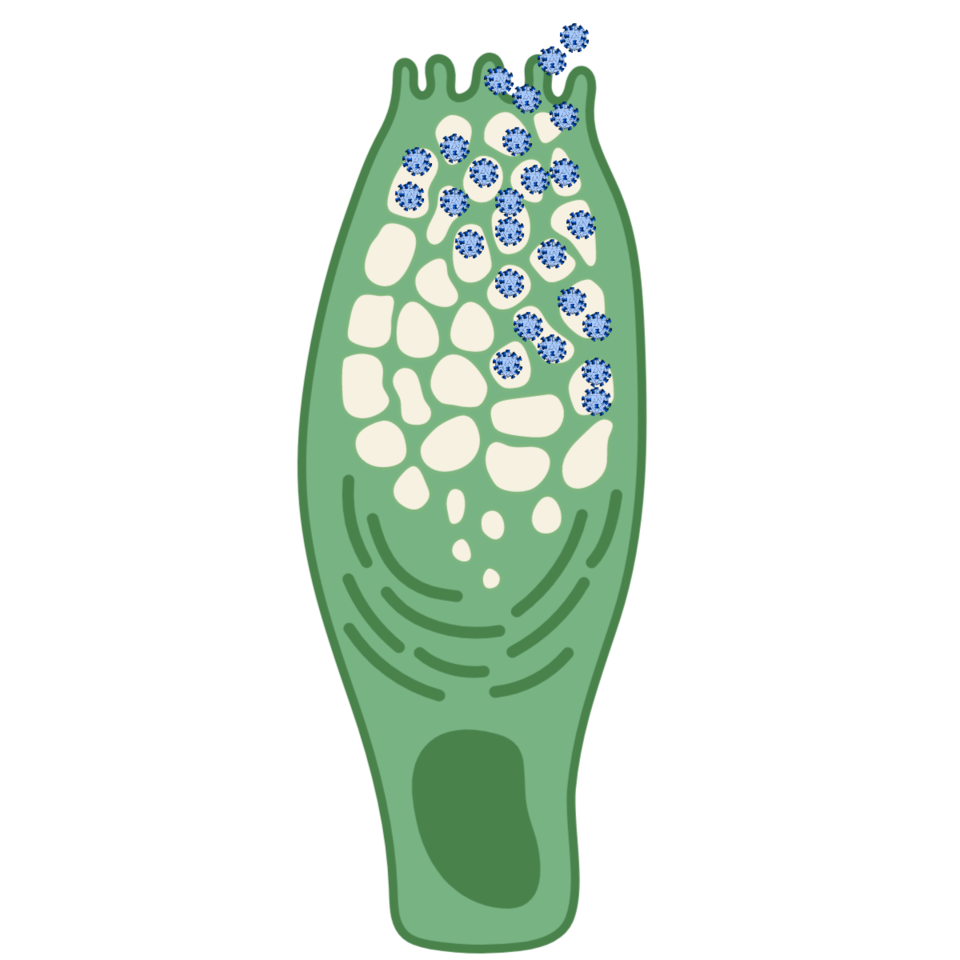 Defining the cellular tropism of a virus is a critical step to understanding its pathogenesis. We set out to answer this seemingly straightforward question for astroviruses, enteric viruses that cause diarrhea, and in the process discovered much more about the virus, host, and microbiome.