On the Hunt: Exploring the Role of Neutrophil Swarming in Antifungal Defense

Neutrophils can use the cooperative behavior of swarming to restrict microbes at sites of infection. Here we use a novel assay to probe the molecular mechanisms used by neutrophil swarms while they attack fungal targets.
Alex Hopke
Postdoctoral Fellow, Massachusetts General Hospital
Follow
Like Liked by Cesar Sanchez and 1 other
0

Neutrophils employ several mechanisms to control the growth of fungi, including enzymes, reactive oxygen species, extracellular traps, and formation of “swarms”. Here, Hopke et al. study how the different mechanisms work together, using an in vitro assay with human neutrophils and clusters of live C…

Neutrophils are the body’s frontline warriors in the battle against microbes.  They have many antimicrobial weapons to help eliminate invaders.  Textbooks present them as lone warriors that confront, engulf, and kill microbes in “hand-to-hand” combat.  Discoveries are challenging this simple view.  A decade ago, the ability of neutrophils to release chromatin a.k.a. neutrophil extracellular traps or NETs, was uncovered.  Since then, NETs were shown to contribute to microbe immobilization and damage.

A few years ago, the ability of neutrophils to work together cooperatively was also discovered.  This cooperation, a.k.a. swarming, may be particularly relevant to the defense against fungal infection.  Several fungi are “big game,” several time the size of an individual neutrophil.  However, studying how neutrophils cooperate during big game hunting is difficult.  While they are the preferred method, current in vivo animal models are also low throughput and lack precision.  Thus, new tools and methods are needed to advance our understanding of how human neutrophils cooperate against fungi.

We created an ex vivo assay in which hundreds of fungal clusters are presented to human neutrophils.  We chose Candida albicans as the prey for our studies. C. albicans represents one of the most common causes of opportunistic fungal infections in humans.  C. albicans infections range from the relatively common vaginal yeast infection and oral thrush to life-threatening invasive candidiasis.

For our assay, we made the C. albicans clusters 100 µm in diameter and we spaced the clusters regularly at 500 µm apart.  To make the fungal patches, we used a “sticky” substance to create large arrays of printed spots on glass slides.  We then added live fungal cells to these arrays, carefully washing to remove any fungi between the arrays.  Finally, we mounted the glass slides in plastic frames, separating more than a dozen wells that could be accessed independently.  We used these arrays as platforms to follow the neutrophil hunting parties during swarming around fungal clusters. We found that neutrophils swarmed robustly around clusters of C. albicans, and this response was able to significantly restrict the growth of the fungi for more than 12 hours.

Neutrophils have a diverse arsenal to fight fungi.  We asked ourselves what tools do neutrophils deploy during their cooperative hunts against our Candida clusters.  Do they need spears and arrows for killing? Do they trap and block the escape of Candida hyphae? As it turns out, several neutrophil antimicrobial mechanisms are involved. Myeloperoxidase (MPO) released by neutrophils creates highly antimicrobial hypochlorous acid.  NETs entangle and trap hyphae, exposing them to the damaging action of elastase enzymes, histones and other antimicrobials.  NADPH oxidase contributes to the production of antimicrobial reactive oxygen species (ROS).  It also emerged that the story is more intricate than a full-frontal assault of the neutrophils on the Candida clusters.

We found that early in the encounter, MPO and ROS antimicrobials are critical for killing fungi. The NETs appeared later, restricting the escape of any survivors that were morphing into hyphae.  While NADPH oxidase appeared to play a role in the direct antimicrobial killing, it also seemed to play a role in regulating swarming dynamics.  The regulatory role of NADPH oxidase activity was unexpected.  This finding highlights the role of new assays in illuminating underappreciated signaling pathways, like the  multi-functional role of ROS production in host-pathogen interactions.

One significant challenge to measuring the contribution of antimicrobial mechanisms were the conflicting results from the use of various chemical inhibitors.  For example, we were surprised when two ROS inhibitors produced opposing results. Discussing these results with Dr. Mary Dinauer, we speculated that these conflicts were due to off-target effects of these inhibitors. To push past this problem, we decided to determine the true impact via genetic deficiency.

We generated genetically deficient neutrophils in a critical component of the NADPH oxidase, rendering it unable to function. These cells, developed in collaboration with Dr. Allison Scherer in Dr. Michael Mansour’s lab at MGH, were a mouse neutrophil line.  This strategy allowed us to generate large numbers of neutrophils with our specific mutation of interest without the high cost of purchasing or maintaining a colony of mutant mice. Surprisingly, these neutrophils formed larger swarms while at the same time being less able to control C. albicans.

The ultimate test was the measurement of human neutrophils from patients.  With help from Drs. Christa Zerbe and Michael Abers at the National Institutes of Health, we obtained neutrophils from patients with chronic granulomatous disease (CGD).  These patients have defective NADPH oxidase activity and are often overwhelmed by infections.  We found that the neutrophils from these patients created larger swarms against clusters of live C. albicans.  At the same time, they were bad at killing fungi, similar to our genetically manipulated mouse neutrophils.  Our findings confirm the dual, regulatory and antimicrobial role, of NADPH oxidase activity during swarming in human neutrophils.

Encouraged by the initial results using the swarming assay, we wanted to see if we could upgrade neutrophil’s antifungal weapons.  Could we increase the effectiveness of the neutrophil hunting party to bring down fungi? Collaborating with Dr. Mansour, we tested several cytokines that could potentially stimulate neutrophils.  We found that treatment with granulocyte colony-stimulating factors (G-CSF and GM-CSF) enhanced the killing and restriction of C. albicans. These molecules could even enhance fungal restriction by neutrophils treated with chemicals that inhibit MPO or other weapons in the neutrophil’s antimicrobial arsenal.

We also probed if neutrophil swarming parties could also prey on clusters of several other clinically relevant fungal species. Remarkably, neutrophil swarming was less robust against Candida species like Candida glabrata and emerging pathogen Candida auris.  These species were cleared without triggering major swarming responses.  These species also do not switch shape to “big game” hyphae and can be eaten and dealt with by individual neutrophils.  Thus, the neutrophil-swarming response appeared to be “customized” to each target.  Some fungi required a more aggressive response than others for effective control.  This level of sophistication for neutrophils is intriguing.  As innate immune cells, neutrophils have long been thought to provide a nonspecific “one size fits all” response to invaders.  Our findings suggest that it may be possible to modulate the neutrophil swarming responses through external cues.  Better understanding of these modulators will help accomplish more effective responses in some infections that are difficult to control.

Swarming Towards Better Outcomes: Enabled by a new set of tools, we shed light on how neutrophils act as cooperative hunters against fungi.  Our efforts expand our understanding of how neutrophils attack and block C. albicans.  We show that we could enhance swarming effectiveness to overcome inhibitory conditions.  This knowledge is critical for the design of future effective therapies for immune-compromised patients – the most at risk for fungal infections. 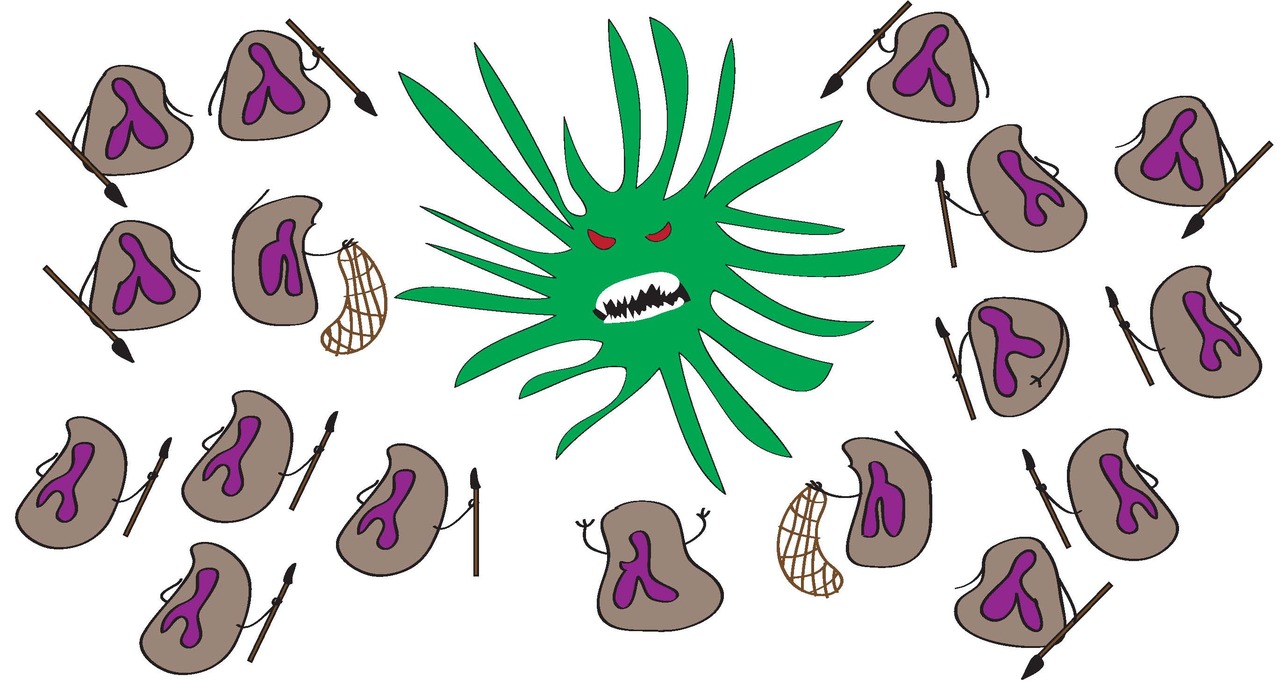 On the Hunt: Exploring the Role of Neutrophil Swarming in Antifungal Defense

Neutrophils can use the cooperative behavior of swarming to restrict microbes at sites of infection. Here we use a novel assay to probe the molecular mechanisms used by neutrophil swarms while they attack fungal targets.