A community from Nature Microbiology
Contributor Nature SMB
Behind the paper

VopQ works as a distinct bacterial effector to kill infected cells by targeting the V-ATPase.

Vibrio parahaemolyticus is a food-borne pathogen that causes acute gastroenteritis in humans. Our previous findings have shown that this bacterium utilizes a type 3 secretion system to inject protein effectors into cultured cells, leading to rapid cell death within three hours. VopQ is one of these effectors that induces autophagic phenotype by inhibiting fusion of lysosome and autophagosome. VopQ also acts as a functional pore-forming protein resulting in leakage of molecules less than 18 Å. These activities are dependent on VopQ’s interaction with its cellular target, the V-ATPase resulting in deacidification of the lysosome. However, VopQ does not assemble into oligomers as canonical pore-forming proteins. Our lab has studied the function and structure of VopQ, but only recently with the technical contribution of cryo-EM, have we finally caught a glimpse of the structure of VopQ revealing its cytotoxic mechanism.

With two high-resolution cryo-EM structures (3.1 Å and 3.2 Å), our work reveals that VopQ is a structurally and functionally a novel bacterial effector. VopQ targets the V-ATPase, a dynamic complex assembled from two subcomplexes: the cytoplasmic V1 that hydrolyses ATP and the membrane-inserted Vo subcomplex that translocates protons using energy from ATP hydrolysis. VopQ works as a monomer while binding to the Vo subcomplex of the V-ATPase. VopQ appears like a left hand (Figure 1) where the thumb caps c-ring of the Vo subcomplex and the fingers appear to be inserted into the membrane, providing an explanation for our previous findings that VopQ causes lysosome deacidification and liposome leakage in vitro.

When testing the interaction interface between Vo subcomplex and VopQ, we found that the c-ring in the Vo subcomplex was essential for VopQ binding to the V-ATPase. An immature Vo subcomplex that cannot escape from the ER membrane was sufficient for VopQ cytotoxicity, as long as the c-ring was present, further broadening our knowledge about the cytotoxic activity of VopQ.

In silico predictions suggest that VopQ likely blocks V-ATPase reassembly because the cytosolic V1 subcomplex is not able to bind the Vo subcomplex due to spatial clash with VopQ. Interestingly, once a functional V-ATPase holoenzyme is assembled, VopQ likely binds the holoenzyme only in one of its three captured specific states as the rotary c-ring is in a different orientation from the one in our current structure. We are testing the later prediction and the preliminary data suggest indeed VopQ can bind the holoenzyme.

In summary, our work now illustrates a working model for how the Vibrio effector VopQ inhibits the V-ATPase.

Back to Nature SMB
Next 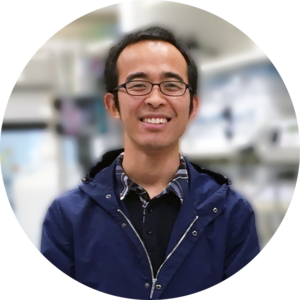 Tracking vancomycin resistant Enterococcus faecium: One genomic analysis pipeline to rule them all
Contributor Nature Comms
Behind the paper