A Leaky Russian Doll: Discovery of Viruses in a Parasitic Worm and Transmission to Parasitized Hosts

Parasitic flatworms have specialized in infecting vertebrates and parasitize millions of people and animals each year. It turns out that these parasites have viruses too! Can they contribute to virus emergence? Can they be the target of novel therapeutic strategies?

Parasites remain a significant health and economic threat to humans, on all continents. But parasites can also be parasitized, by viruses! However, the fact that parasites can host viruses, and that these viruses could contribute to parasite virulence, or be transmitted to parasitized hosts has been broadly overlooked. In fact, for most parasites, the presence of associated viruses remains unknown. As part of the Parasite Microbiome Project, we conducted the first comprehensive search for viruses in a parasitic flatworm known as Schistocephalus solidus. It was quite a fishing expedition!

The parasite S. solidus grows to a large size in the body cavity of Threespine sticklebacks and conspicuously infected fish can be easily selected based on the size of their belly. 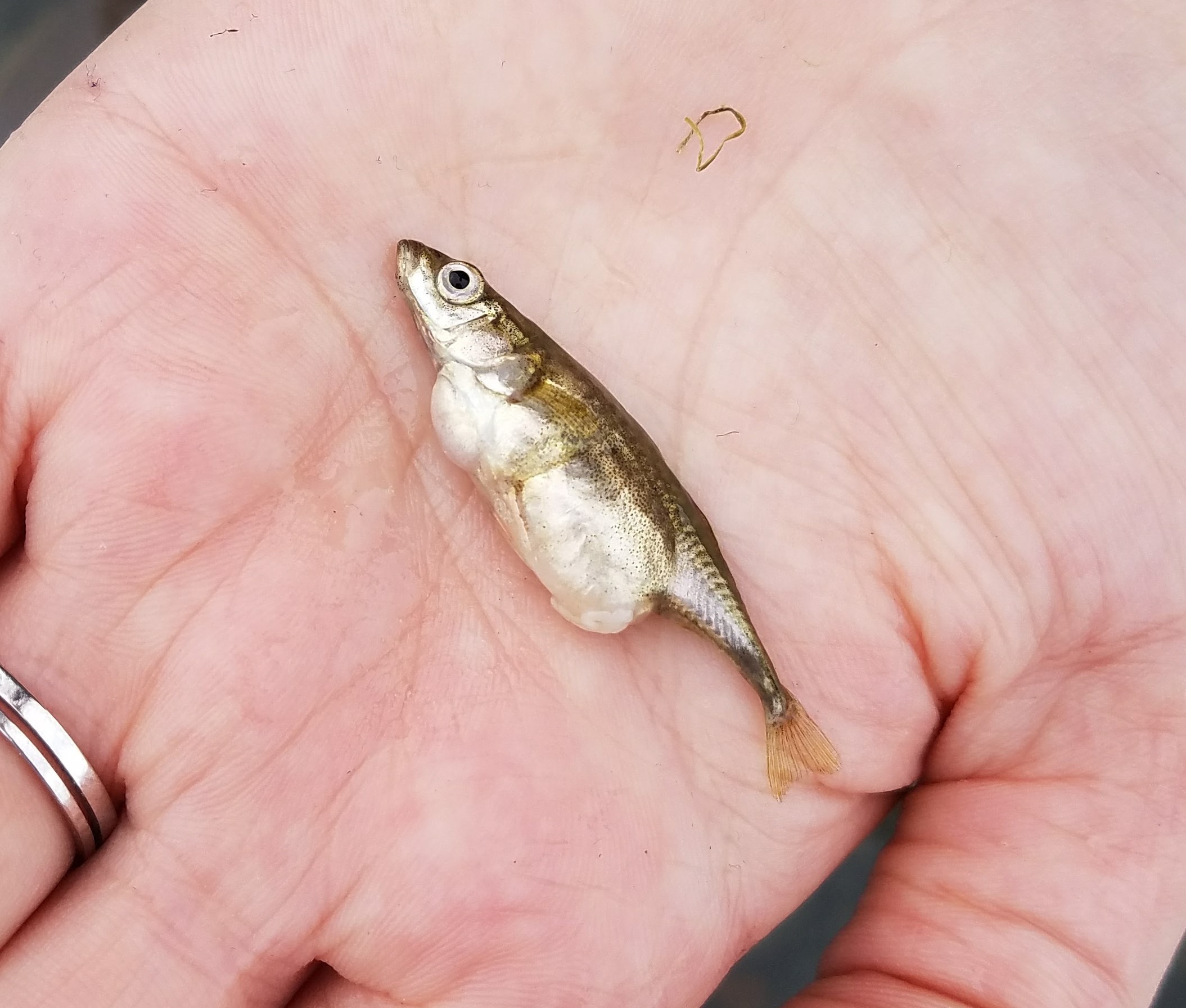 We purified virus particles from four worms dissected out of the body cavity of four parasitized fish, extracted viral RNA and sequenced it. We discovered two different virus species: a Rhabdovirus and a Jingchuvirus that we called SsRV1 and SsJV1, respectively. We conducted a second round of sequencing to obtain more genome sequence information, and used a few more individuals "just-in-case" there was another virus. Unexpectedly, we found not one but four more viruses! Three of these additional viruses (called SsTV1, SsTV2 and SsTV3) had similarities to toti-like viruses, while the remaining virus (called SsBV1) was similar to Bunyaviruses. That’s a lot of viruses for so few parasites! We looked into publicly available transcriptomes of S. solidus from Europe and checked them for viral stowaway passengers. We found related strains of many of the same viruses as in Alaskan worms, in addition to new viruses of the family Nyamiviridae (we called these SsNV1 and SsNV2).  Given that S. solidus infects Threespine sticklebacks in hundreds of lakes, throughout the Northern Hemisphere, it is likely that many more viruses remain to be discovered.

We designed complementary experiments to learn more about the ecology of these viruses. First we developped targeted RT-PCR assays to assess virus presence in a range of different samples. For each virus, and to ensure test specificity, two different assays were designed, and used to confirm each other.

S. solidus has a complex life-cycle that involves infecting copepods, then Threespine sticklebacks that consume parasitized copepods, and finally fish-eating birds where the parasite reproduces and completes its life cycle. We bred pairs of parasites in the lab in an artificial bird gut. Adult S. solidus are not fussy lovers and easily produce hundreds of eggs. After testing hatched eggs, we could determine whether viruses were transmitted to the next generation.

We also grew copepods and infected them one by one with a single parasite. This tedious process allowed us to determine the rate of virus transmission from parents to offsprings.

We found that all viruses are vertically transmitted to the progeny (except for SsBV1 which could not be tested). For SsRV1 and SsJV1, the success of transmission was very high (100% of the progeny carried the virus).

In addition, we found SsRV1 in the parasite culture medium, indicating that it is excreted by breeding adult parasites. This suggests that the virus could theoretically be transmitted to parasitized birds in vivo. We did not have the means to experimentally infect birds to test this hypohesis. However, we tested virus presence in copepods. We also grew sticklebacks in the lab, and exposed each individual stickleback to a single copepod, parasitized by a single worm, infected by a single virus (like a Russian Doll). We found SsRV1 in various tissues of fish experimentally parasitized in laboratory conditions and in sticklebacks collected in the field. Thus, we confirmed that SsRV1 is transmitted to both S. solidus intermediate hosts: copepods and stickleback fish.

The transmission of viruses from a parasite to the parasite's hosts would offer opportunities for viruses to shift host, which could lead to virus emergence. SsRV1 phylogenetic position suggests that this might have already happened: SsRV1 has a basal position to Lyssaviruses (rabies viruses) and other dimarhabdoviruses. Many rhabdoviruses are pathogenic to humans, and are under surveillance because they emerge and re-emerge regularly as zoonotic and epizootic viral diseases. It is now necessary to characterize the virome of a greater diversity of parasitic flatworms to determine whether a virus of a parasitic flatworm is indeed the ancestor of Lyssaviruses, and if we need to develop a new surveillance program for viruses of parasites.

The discovery of a range of viruses in parasites also provide new opportunities for the development of parasite control strategies. Indeed, some viruses may be pathogenic for the parasites only, and could be used as biocontrol agents. Other viruses might worsen parasite-associated diseases, especially when they are transmitted to parasitized hosts. In those cases, vaccines or antiviral drugs targeting the viruses could reduce parasite pathogenicity and improve the clinical outcome of infection. Clearly, furture research programs focusing on the role of viruses in parasite virulence and pathogenicity hold great promises.

The original paper by Hahn et al. published in ISME J can be found here.