In the past decade, research has intensified to develop new approaches for combating implant-associated infections. Our research involves modifying implant surfaces with nanoscale features that kill bacteria on contact, and seeks to uncover the mechanistic basis behind these processes.
Joshua Jenkins
Postdoctoral Research Fellow, University of British Columbia
Follow
Like Liked by Cesar Sanchez and 4 others
0

Synthetic nanopillars resembling the wing surface of certain insects display antibacterial activities. Here, Jenkins et al. show that these activities do not necessarily require bacterial lysis, and may be mediated by oxidative stress induced by deformation of the bacterial cell envelope.

The wings of some dragonfly species have evolved nanoscale, pillar-like structures (called nanopillars) that kill bacteria upon contact. This unique bactericidal mechanism has drawn significant interest, as synthetic nanopillars might be applied to implantable medical devices (e.g. hip and knee prostheses) to prevent biofilm-related infections whilst negating the current need to coat implants with antibiotics.

Studies over the past decade have proposed that nanopillars stretch the bacterial cell envelope upon contact, causing a loss of structural integrity that leads to bacterial lysis and death. However, although dragonfly mimetic surfaces have been shown to possess antibacterial activity, a consensus has yet to be reached on the precise mechanisms that cause bacterial killing. To address this knowledge gap, our group seeks to better understand the mechanisms of nanopillar-mediated cell death so as to facilitate the translation of this technology into clinical applications. For this, a multidisciplinary research team of biomaterials scientists, microbiologists, biochemists and image specialists has been assembled.

In our most recent study, we used electron tomography and focused ion beam cross sectional analysis to obtain a detailed perspective of how different bacterial species physically interacted with dragonfly mimetic nanopillars formed on titanium. In many instances, nanopillars were found to physically trap the bacteria, with such nanopillar-mediated impedance expected to significantly impair the capacity of bacteria to replicate on the surface. We were also able to clearly show that nanopillars could induce localised envelope deformation and penetration of bacterial cells (Fig.1). Crucially, however, these events only occurred at a relatively low frequency and did not lyse the bacterial cells. Nonetheless, bacteria exposed to the nanopillars exhibited significantly reduced viability relative to a flat surface. This inferred that the nanopillars could kill bacteria by a lysis-independent mechanism.

We next considered that bacterial contact with nanopillars might trigger physiological responses that resulted in loss of viability. To explore this possibility, we compared the proteomes of E. coli or S. aureus in the presence or absence of nanopillar surfaces by tandem mass tagging coupled to mass spectrometry (nanoLC-MS/MS). Many of the responsive pathways were seemingly species-specific, but a conserved theme in the presence of nanopillars was the upregulation of proteins associated with protection from oxidative stress. We were then able to validate this finding by demonstrating that levels of hydrogen peroxide, a byproduct of reactive oxygen species, were significantly higher in the conditioned medium of S. aureus and E. coli incubated on nanopillar surfaces than on controls. This provided compelling evidence that the nanopillars could induce oxidative stress within bacterial cells upon contact.

Putting everything together, our study shows that the antibacterial effects of nanopillars are multifactorial and nanotopography-dependent. Deformation and subsequent penetration of the bacterial cell envelope by nanopillars was confirmed. However, the cumulative effects of physical impedance and induction of oxidative stress, rather than cell lysis, might be key to the bactericidal properties of these nanopillars. Better understanding of such mechanisms could prove invaluable for the future development of improved antibacterial, nanotextured materials for biomedical applications. 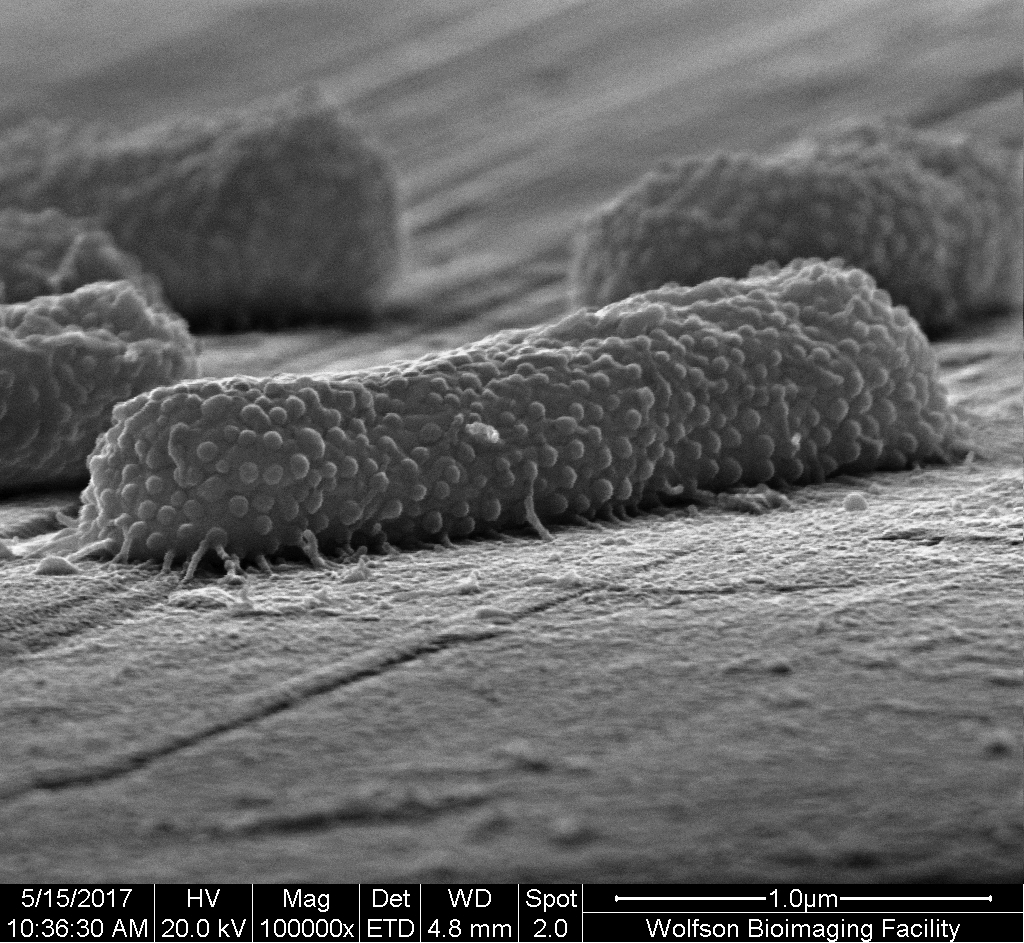 In the past decade, research has intensified to develop new approaches for combating implant-associated infections. Our research involves modifying implant surfaces with nanoscale features that kill bacteria on contact, and seeks to uncover the mechanistic basis behind these processes.