A paper in Nature Chem. Biol. describes the cryoEM structure of the Potato Virus X at 2.2 Angstrom resolution, unveiling the atomic details of the RNA-protein interactions.

The so-called "cryoEM revolution" that has taken place in the past few years is changing, or it has already definitely changed, the panorama of structural biology. It has made it possible to determines structures of very large molecular complexes or of membrane proteins that for years have resisted all crystallization attempts. The possibility of studying at a quasi-atomic level individual proteins/particles frozen by a drop of solution greatly simplifies things, but it is necessary to have available a highly concentrated sample homogenous in its composition at the atomic level. While samples with these features are generally easy to obtain for globular proteins or spherical viruses, highly symmetric and intrinsically stable, the same is not true for flexible proteins or particles.

Filamentous viruses, such as Potato Virus X (PVX), represent an atypical case: they are periodic objects with helical symmetry along one direction, but they do not develop along a straight axis since they are slightly flexible, that is, they bend in the long-medium range. In order to overcome this characteristic, it is necessary to select a small section of the virus particle, choosing a box of appropriate size, and consider this portion as the unit that repeats by translation along the entire length of the virus (and along all the other numerous viral particles present in each field of observation).

Fig. 1. An overview of a portion of the PVX virus (right). The three domains of the protein are shin in yellow, green and cyan, the RNA in red. The magnification on the left displays only one single CP with a fragment of RNA.

PVX is the plant virus considered as the prototype of Alphaflexiviridae family. It is important not only as a plant pathogen, but also for its potential biotechnological applications, which for now have not yet been completely explored. Analysis with the cryo-EM technique has made it possible to obtain the virus structure at a resolution of 2.2 Å, the highest resolution ever obtained for a filamentous virus and one of the highest for cryoEM. This allowed us to define the whole structure in great detail, including the ss(+)RNA genome and some solvent molecules that stabilize the RNA-protein interaction. The only portion of the virion non visible in the density map is represented by the 28 amino acid residues at the N-terminus of the coat protein (CP), which are disordered. The viral particle is made up of segments of 8.8 CP that wrap around to form a left-handed helix. The RNA is located inside a continuous crevice present along the entire virion.

The detailed knowledge of the structure and of the way the nucleic acid interacts with the CP units opens the way for various nano- and bio- technological applications, in addition to offering the possibility of designing antiviral compounds able to interfere with the virus assembly. 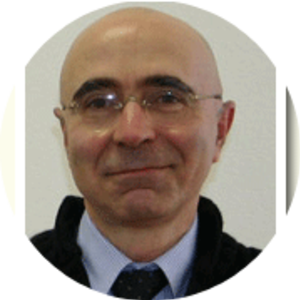 Giuseppe Zanotti is full Professor of Biochemistry at the Univesrity of Padova. He is active in Structural Biology (Protein Crystallography and cryo Electron Microscopy)
Follow