A new role for photosystem II in chlorophyll f synthesis

The cyanobacterial chlorophyll, Chl f, absorbs far-red light. Mutation of two residues in a subunit of photosystem II converts it to a Chl f synthase. This ‘super-rogue’ photosystem might improve photosynthetic efficiency in low light.

Photosystem II (PSII) is well known as the light-driven water-oxidizing complex of oxygenic photosynthesis responsible for feeding electrons into the photosynthetic electron transport chain of plants, algae and cyanobacteria. We have isolated a variant PSII complex – termed super-rogue PSII – which is not involved in water oxidation but instead has evolved to synthesize chlorophyll f, a pigment used by some cyanobacteria to capture far-red light to drive photosynthesis. Potentially expression of super-rogue PSII in plants and algae could boost photosynthetic efficiency.

PSII and the “switchable” D1

At the heart of PSII is the D1 reaction center subunit which binds many of the co-factors involved in PSII function including the oxygen-evolving Mn4O5Ca cluster which oxidizes water to oxygen. In 2012, James Murray noticed that many cyanobacteria encoded variants of D1 that lacked the key residues involved in binding Mn, suggesting that these modified forms of D1, which he termed rogue and super-rogue forms of D1, might have a role outside water splitting (Murray, 2012). Their physiological roles have remained a mystery until Don Bryant and colleagues showed that a super-rogue form of D1 (sr-D1) was used by certain cyanobacteria to synthesize chlorophyll f (Chl f), a far-red absorbing pigment that allows these cyanobacteria to perform photosynthesis in environments enriched in far-red light such as stromatolites (Chen et al., 2010; Ho, Shen, Canniffe, Zhao, & Bryant, 2016). Initial ideas suggested that sr-D1, also termed ChlF, might form a new type of homodimeric reaction center complex that oxidized Chl a to Chl f using the same highly oxidizing chlorophyll and tyrosine species that are normally used to drive the oxidation of water (Ho et al., 2016). Although the hypothesis that sr-D1/ChlF functions as a homodimer was backed by some preliminary evidence, the alternative scenario that sr-PSII/ChlF might assemble into a PSII-like complex was not properly addressed.

By expressing a FLAG-tagged derivative of sr-D1/ChlF in the cyanobacterium Synechocystis 6803, which cannot normally make Chl f pigment, we were able to purify FLAG-tagged sr-D1/ChlF. We found that sr-D1/ChlF assembled into a multi-subunit PSII-like complex similar to normal oxygen-evolving PSII complex except that the extrinsic proteins associated with the Mn cluster were absent. The complex contained a similar complement of Chl a and pheophytin a pigments as regular PSII but contained small amounts of Chl f – approximately 1 molecule per 3 complexes. This heterologously expressed super-rogue PSII complex (sr-PSII) is therefore still able to make Chl f, although not as efficiently as the native system. One possible reason is that the native cyanobacteria synthesize new types of PSI and PSII complexes in far-red light with binding sites that have been specifically altered to accommodate Chl f (Kato et al., 2020).

So what part of sr-D1 is actually important for Chl f production? We analyzed the accumulation of Chl f pigment in Synechocystis strains expressing chimeric proteins containing different portion of sr-D1/ChlF and D1. To our surprise, mutating just two residues in D1 to a total conserved QD signature found in srD1 led to the production of Chl f. How Chl f is made is still unclear, but our working hypothesis is that sr-PSII might oxidize Chl a to Chl f using reactive oxygen species produced following light-induced charge separation. The QD motif is suitably positioned in PSII to interact with a chlorophyll pigment – one possibility is that it might represent a catalytic site for the conversion of Chl a to Chl f, through the oxidation of a methyl group to a formyl group, although this idea is still extremely speculative.

Shengxi Shao
over 2 years ago

I understand it is too serious for a blog, but writing informally is also too serious a task for me and my coauthors (・_・;)  Especially when this blog has no emoji function. 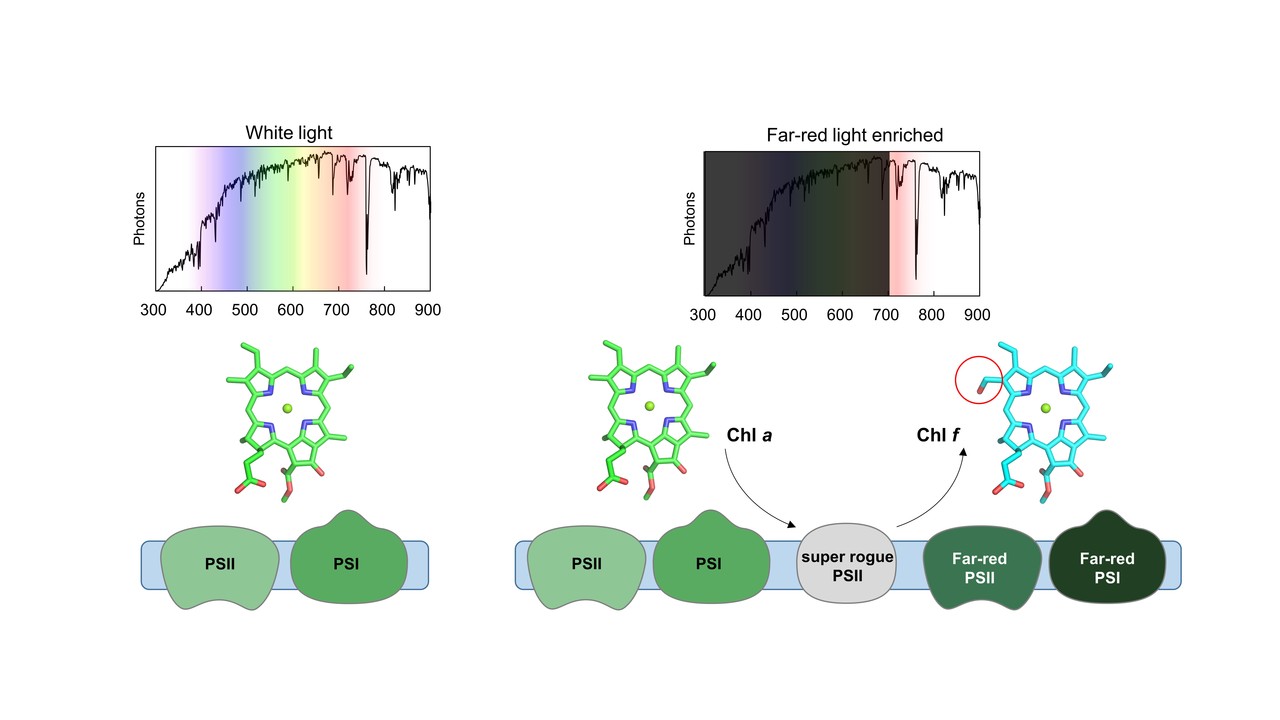 A new role for photosystem II in chlorophyll f synthesis