Insights into the community assembly and interaction of marine benthic archaea

Dynamics of the archaeal community in marine environments receive far less attention compared to its bacterial counterpart. However, the culture-independent studies are showing that sedimentary archaea are incredibly diverse regarding their phylogeny and metabolism and play crucial roles in biogeochemical cycling. The response of the archaeal community structure to environmental disturbances and stochastic events thus may affect their ecological functions. This is particularly true for the coastal environments that receive river discharges and experience frequent physical disturbances including tidal flow and mud mobility.

From 2010, my lab started researches on marine microbial ecology in various environments. Since then, we have attended many research cruises along the Chinese coastal seas that are supported by the National Natural Science foundation of China. Jiwen Liu attended his first cruise in May 2012 when he was a PhD student, and collected many sediment samples from the Bohai sea, Yellow sea and East China Sea. Our previous 16S rRNA gene sequencing data showed that each sea area harbored its unique microbial community. This might be explained by the discharges from the Yellow River, Changjiang River and numerous small rivers, which result in several mud deposits that are geographically separated. The results obtained therein lead us to propose that dispersal limitation, due to river runoff induced spatial isolation, may dominate the assembly of the benthic archaeal community in these areas. In our most recent study, based on the analysis of 58 surface sediment samples spanning from the Bohai Sea to the East China Sea (seasonal samples were collected during five cruises conducted in 2015 and 2016), we confirmed this hypothesis by showing that the archaeal community displayed a clear distance-decay pattern with dispersal limitation accounting for ~ 40% of the community variation. Homogeneous selection and ecological drift were also observed to be at work, and these three ecological processes together provided an explanation power of almost 100%. These results meant that stochasticity had a higher effect than determinism on the archaeal community assembly in Chinese coastal sediments. These findings would also be applicable to other coastal areas that experience strong annual river runoff.

We wonder if seasonal environmental changes would affect the community assembly process. In this connection, we found in both summer and winter, there was a dominance of stochasticity relative to determinism. However, stochasticity appeared to play a more important role in summer than in winter. To construct the linkage between community assembly and inter-taxa interactions, archaeal community networks were analyzed for each season. It showed that the summer network was comprised of a lower number of taxa and correlations, and characterized by a higher level of modularity than the winter network, implicating closer interactions among archaeal taxa in winter. Our results suggest that random events occurring to individuals are likely to weaken the communication and interaction between them. With the data of archaeal networks, it is interesting to find whether the co-occurrence patterns exhibit spatial heterogeneity, if does, whether the variation patterns follow those of community compositions. We found that the co-occurrence patterns did not have a distance-decay pattern that has been observed in the community composition. Changes in community composition in response to environmental disturbances may be predicable, but such changes do not necessarily determine the changes of inter-taxa interactions.

Facing the ongoing expansion of archaeal taxonomy and functional versatility, our study extends beyond the description of community composition and provides important information on community assembly processes in time. Determining the ecological processes governing the assembly of microbial community is one of the central theme in microbial ecology. Such knowledge is very important for tracing the dynamics of microbial community in response to environmental changes. Our study would benefit for a better understanding of microbial ecology in marine sediments. 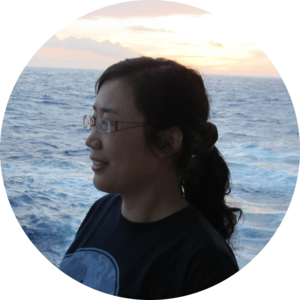