Release and recovery of an insect biocontrol fungus

When I was a Master graduate student from 1993 to 1996 at the Anhui Agricultural University (AAU, Hefei, China) with Prof. Zengzhi Li, I did the formulation and field release studies of an insect pathogenic fungus Beauveria bassiana to control the Masson’s pine caterpillars (Dendrolimus punctatus) at a pine forest farmland in south Anhui Province, China. I received my Master degree in 1996 by evaluation the shelf-lives of Beauveria conidia formulated in different inert materials and control efficacy of field releases against the caterpillars. After graduation, I became a teaching assistant at AAU and still periodically carried on the field collection of the mycosed insect cadavers at the biocontrol site. Two years later, I started my Ph D study at the China Agricultural University in Beijing. My supervisor, Prof. Jilun Li, was mainly focusing on the mechanistic studies of nitrogen fixation by rhizobial enzymes at that time. He asked for my opinion what I had planned to do for my Ph D thesis. I was hesitating to answer but finally told him that I was curious to track the fate of the released fungal strains in the field. Prof. Li was very open minded and he supported my decision without any concern for not working on his project for rhizobia. Thus, my Ph D thesis was about the molecular ecology of B. bassiana to unveil the genetic relatedness of different populations and the recovery of the released strains two to three years after the applications [1, 2].

After I received my Ph D degree in 2001, I went to do my postdoc studies of the molecular genetics of entomopathogenic fungi including Beauveria and Metarhizium species at the Swansea University in the UK and University of Maryland in the US before I joined the current institution for a faculty position early 2007. During which time, my colleagues at AAU still carried on the sampling of B. bassiana strains at the biocontrol site as well as different other places throughout China.

Twenty years later, the curiosity of the fate and influence of the released strains was still in my mind. Thus, I asked my students together with the colleagues from AAU to do field samplings again in 2017 (Image). We then had the Beauveria strains collected from the biocontrol sites spanning the years from 1997, 2007 to 2017, termed as three periodical populations. Taken together with the strains collected from 16 additional sites within China, we re-sequenced the genome of 270 strains and performed population genetic analysis. Most of all, the released strains could be found either in 2007 or in 2017. They are still there but with low recovery rates (<8%), which ruled out the concern of population displacements. We also found that the released strains could infect the non-target insects; however, they behaved just like the local isolates in an enzootic manner that could alleviate the non-target safety worries. The host-jumping strategy used by insect pathogens can actually relax the selective pressure on them.

Sample collection at the biocontrol site of pine-forest farmland.

It is also interesting to verify from the fast decay of linkage disequilibrium that the sexual reproduction of Beauveria strains with opposite mating types were induced in the lab. Even being non-randomly and rare, the finding would support the occurrence of sexual recombination in the field for this fungus with a cryptic sexual life. It was also found that Beauveria populations are both spatially and temporally dynamic, which can be manifested with periodical population replacement and isolate migrations between geographically-distant populations. All these factors would favor the balancing selection of this insect pathogen that we found. Thus, in contrast to the arms race model of pathogen-plant coevolution [3], the trench warfare scenario is implicated in fungus-insect interactions. Overall, we finished a curiosity-driven story started when I was a graduate student and finished by my graduates 20 years later. Well, evolution keeps going. 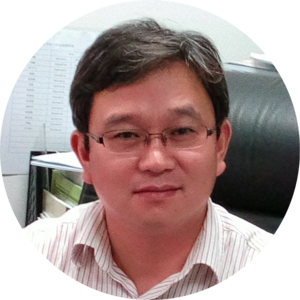