How does flu affect poo?

We investigated what happens to the gut microbiome after lung infection, why and what impact it had.
John Tregoning
Author: Infectious. Reader in Respiratory Infections., Imperial College London
Follow
Like Liked by Ruth Milne and 1 other
0

There are lots of motivations to do science – to solve a grand global challenge, to answer a fundamental question about how the world works, because it’s a job and you’ve got to do something before pub opening times. For me, it is about solving puzzles – piecing together a coherent story from a jumble of observations.

In our most recently published paper, we got to do exactly that, and best of all, we got to draw it all on a white board, like in CSI.

We started with an observation (from a previously published paper). When mice get viral lung infections, the bacteria in their guts (the gut microbiome) changes. This was quite surprising. So in the follow up we wanted to understand why, but also to understand if the changes in the microbiome affected anything.

But first of all, why we did care at all. As a brief reminder, it is entirely normal to have gut bacteria, in fact various estimates put the number of cells of gut bacteria as higher than the cells of person surrounding them. The gut bacteria do a whole range of important things, from breaking down your food for you to regulating your immune system.

Back to the story. One other thing we did know was that when infected with a virus, mice lose weight. In fact, relative to body size they lose quite a lot of weight, up to 25%, which they can put back on very quickly. This was our starting point and we speculated it could be due to a number of reasons, including the increased effort of breathing. Helen (the student working on the project) made the very simple step of measuring the amount of food eaten. She found that over the course of the infection, the mice stopped eating and it was this that caused the weight loss. When we mimicked this reduction in eating by reducing the amount of food the mice had per day, we saw an identical change in the gut microbiome. So problem one solved.

However, this then led to the next question – why do the mice stop eating? We drew on our previous studies, in which we had showed that the immune response to infection was associated with weight loss after infection. Specifically we were interested in an immune cell called the CD8 T cell and a signalling molecule called Tumour Necrosis Factor (TNF), which the immune system releases to activate other cells. We used antibodies (molecules that are recognise other proteins very specifically) to block CD8 T cells or TNF to see if the immune response was responsible for weight loss. To cut the story short, T cells were important, TNF not so much. It still begs the question, why does the immune system cause weight loss. At this point the simple answer is, we don’t know.

We then switched our attention to the downstream effects. One thing we wanted to see was if the change in the gut bacteria, changed susceptibility to other gut infections. In our hands, they didn’t – when we infected mice with a lung virus, there was no effect on a subsequent gut infection. However, we did observe one difference after infection. There is a complex network of chemicals in your guts, called the metabolome. After infection, these biochemicals in the guts changed. What was intriguing was that some of the chemicals that increased have previously been described as anti-inflammatory. One crazy speculation from this is that by stopping eating the mice actually get better, but we have no proof that this is true and it might just be a correlation. 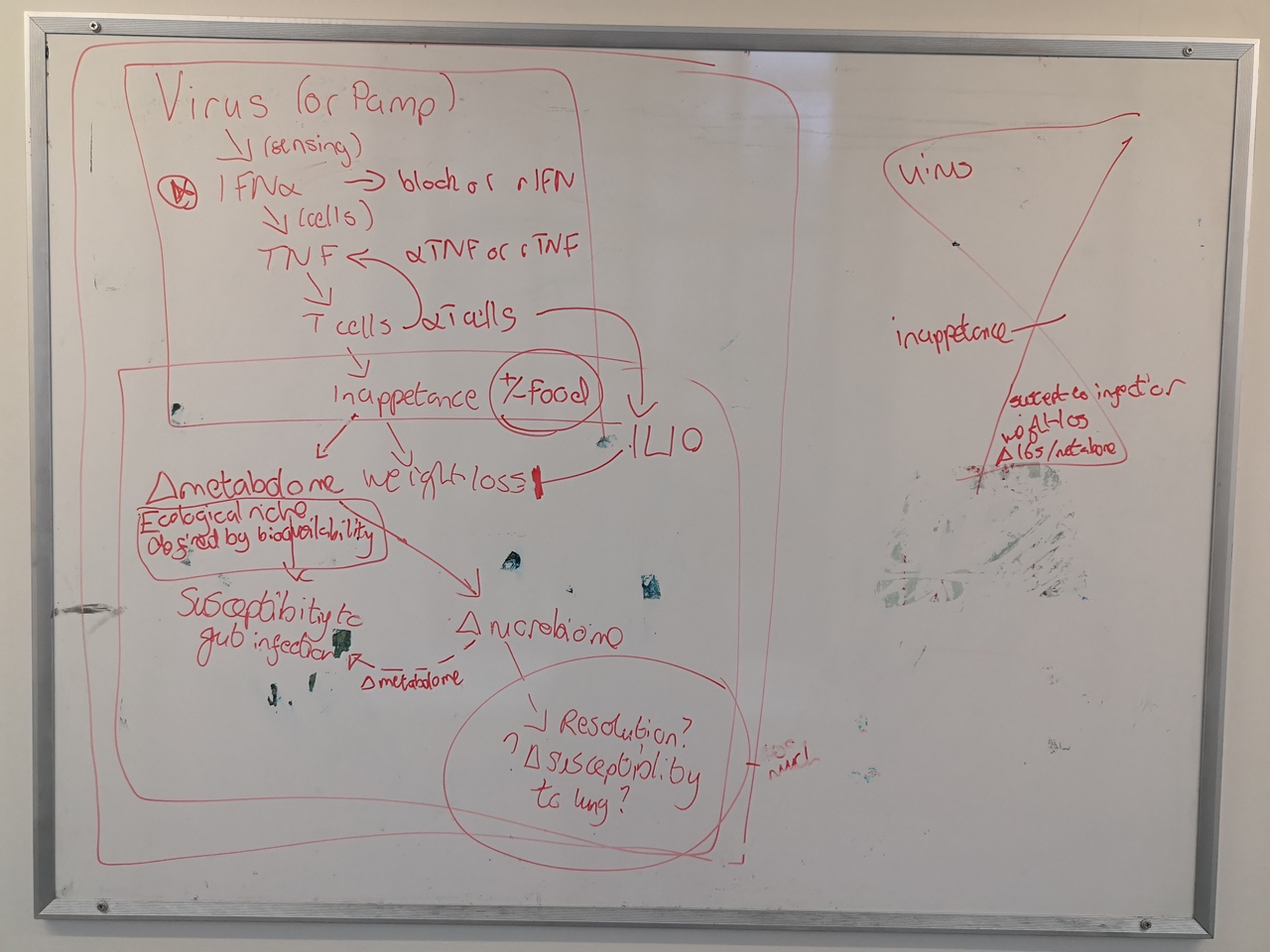 How does flu affect poo?

We investigated what happens to the gut microbiome after lung infection, why and what impact it had.