The identification of the KinB–AlgB two-component system, known to modulate alginate biosynthesis, together with downstream proteins that repress the Type I-F CRISPR–Cas system in Pseudomonas aeruginosa, elucidates how bacteria control the expression of nucleolytic host defence systems to minimize t…

Summary: Bacteria regulate CRISPR-Cas  during lifestyle transitions to maximize anti-phage immunity and minimize self-toxicity. Phages fight back by stealing a key transcription factor and use it to control CRISPR-Cas themselves.

The viruses that infect bacteria (bacteriophages, phages) outnumber their hosts ten to one. To survive in a sea of enemies, bacteria employ nucleolytic CRISPR-Cas immune systems to protect themselves. This protection comes at cost however, as CRISPR-Cas can also damage the bacteria’s own genome in a process called auto-immunity. Our question here was: How do bacteria regulate CRISPR-Cas in order to balance the benefit of anti-phage immunity with the risk of self-toxicity?

We began our search for CRISPR-Cas regulators in the bacteria Pseudomonas aeruginosa. An unbiased transposon mutagenesis revealed that the two-component system KinB/AlgB regulates the P. aeruginosa Type I-F CRISPR-Cas system. Luckily for us, the KinB/AlgB pathway has already been well characterized due to its role in activating production of the clinically-relevant polysaccharide alginate. Lots of P. aeruginosa clinical isolates massively overproduce alginate, where it plays an important role in the formation of pathogenic biofilms.

Using bacterial mutants generously provided by Deborah Hung’s lab as well as those we generated ourselves, we were able to establish that the KinB/AlgB pathway represses anti-phage immunity in P. aeruginosa. By removing key downstream transcription factors in the KinB/AlgB pathway, we could make CRISPR over 50x better at killing phages! During this time, Bonnie Bassler’s lab discovered that quorum sensing activates CRISPR-Cas in P. aeruginosa at high cell density. This was super exciting: they had identified what turns CRISPR on and we found a pathway that turns CRISPR off.

Things got confusing however when we began measuring the levels of CRISPR-Cas transcripts and protein in our hyperactive CRISPR mutants. Deletion of the transcription factor alginate and motility regulator Z (AmrZ) massively increased anti-phage immunity but didn’t seem to impact CRISPR protein or RNA levels at all. What the heck? Ultimately, we realized that our RNA and protein measurements had been done on bacteria grown in liquid culture whereas our anti-phage plaque assay was performed on solid media. Follow up experiments confirmed our suspicion: AmrZ is triggered to repress CRISPR only when bacteria are growing on a surface.

We think surface-induced repression actually makes a lot of sense in light of phage infection biology. Phage diffusion is limited on a surface relative to liquid growth, so infection risk is greatly reduced. Furthermore, George O’Toole’s lab has previously shown that P. aeruginosa is hypersensitive to CRISPR-Cas self-targeting during surface association and biofilm formation. This implies CRISPR auto-immunity costs are also dependent on the growth state and physical environment of the cell.

This regulatory strategy seems pretty logical from a bacterial perspective, but bacterial evolution is only half the story when thinking about CRISPR-Cas biology. In an exciting plot twist, we found that lots of Pseudomonas phages and plasmids encode their own hijacked copies of the CRISPR-Cas repressor AmrZ! Our lab studies phage-encoded CRISPR-Cas inhibitors called “anti-CRISPRs”, so we were really excited about the possibility that AmrZ had been stolen to work as an anti-CRISPR itself. Indeed, phages expressing these hijacked regulators could now repress CRISPR-Cas when integrated into the bacterial chromosome as prophages. This is pretty incredible, and highlights how ingenious phages can be when it comes to manipulating their hosts. Maybe all immune systems are caught in the same evolutionary trap: regulation is necessary to safely maintain an immune system, but endogenous mechanisms of immune repression are easily exploited by parasites.

Cover image includes the structure of an AmrZ tetramer bound to operator DNA. 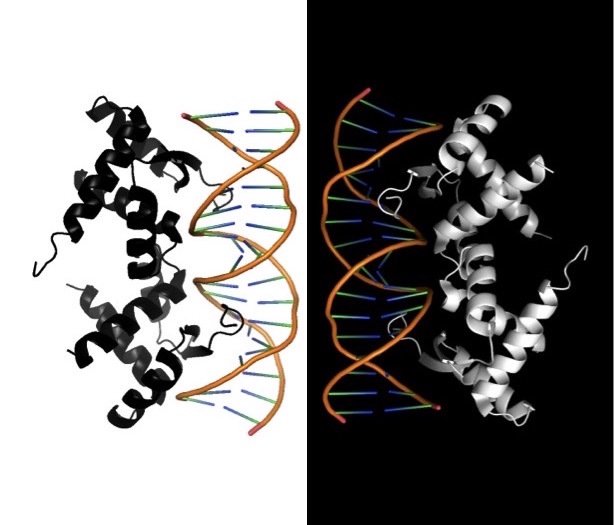