Auxotrophic bacteria rely on their environment to obtain essential amino acids. We discovered the heterogeneous expression of methionine transporters in an auxotrophic bacterium. The heterogeneity is strikingly stable, which makes that it becomes visible in bacterial colonies.
Jhonatan A. Hernandez-Valdes
PhD Molecular Genetics, University of Groningen
Follow
Like Liked by Cesar Sanchez and 2 others
0

I originally aimed to study a putative methionine transporter (Met transporter) in the bacterium Lactococcus lactis and constructed a strain to analyze its expression by visualizing green fluorescent protein (GFP) as a reporter. When growing this strain in liquid culture media with different concentrations of methionine, the measurements of GFP expression by a plate-reader assay showed that the Met transporter was highly expressed when the methionine concentration was very low, in other words we confirmed that the cells require the Met transporter to take up the essential amino acid methionine. However, a first observation of the bacterial cells under the microscope showed a mixture of fluorescent and non-fluorescent cells (Figure 1). Being worried of having stored two different bacteria in the bacterial glycerol stock, I streaked them on an agar plate to isolate a pure strain. I was astonished with the result, observing fluorescent and non-fluorescent colonies, where both types of colonies were formed by the same strain (Figure 2), and at that moment this curiosity-driven research story of phenotypic heterogeneity begun.

Figure 1. A bacterial liquid culture was first observed under the microscope, and fluorescent and non-fluorescent cells were noticed.

The concept of isogenic bacterial populations, i.e. when all bacteria have identical genetic material, giving rise to identical phenotypic offspring, has been revised in the last decades. Nowadays, many studies have shown that within a bacterial population, some cells can behave in a different manner and display various phenotypes.  There are well-known examples of phenotypic heterogeneity at the single cell level that are related to the bacterial lifestyle, e.g. in sporulation, motility or competence development. In this study we uncover a remarkable and unprecedented case of long-term phenotypic heterogeneity related to amino acid uptake and auxotrophy. When methionine becomes limiting, two isogenic subpopulations emerge that rely on different methionine transporters to support growth: one subpopulation mostly relies on the high-affinity Met transporter and another subpopulation on a low-affinity transporter. The cells rarely switch phenotype, and therefore the heterogeneity becomes incredibly stable and inherited for tens of generations, due to which the heterogeneity is also apparent at the colony level (Figure 3).

Thereupon, we investigated the regulatory mechanisms underlying this phenomenon. Our findings show that the long-term phenotypic heterogeneity results from a T-box riboswitch in the promoter region of the genes encoding the high-affinity Met-transporter. The T-box riboswitch is a widely used mechanism in Gram-positive bacteria to sense and regulate amino acid availability. However, to our knowledge, this is the first case of RNA-level regulation that gives rise to slow-switching phenotypic heterogeneity.

Why are methionine uptake systems heterogeneously expressed? The development of phenotypic heterogeneity can give rise to important advantages. A first scenario is the bet-hedging strategy; a situation where a subpopulation is prepared for unexpected changes in the environment. It is likely that cells that highly express the Met transporter will do better in an environment with minimal amounts of methionine, but that the other one is more effective in an environment with high methionine concentrations. A second scenario is the so-called division of labor, a situation where both subpopulations have a cooperative interaction that benefits them both. Up to now, we can only suggest these possible benefits, but we believe our discovery of the long-term phenotypic heterogeneity in the methionine uptake could be a stepping-stone for further exploring its potential benefits and consequences. 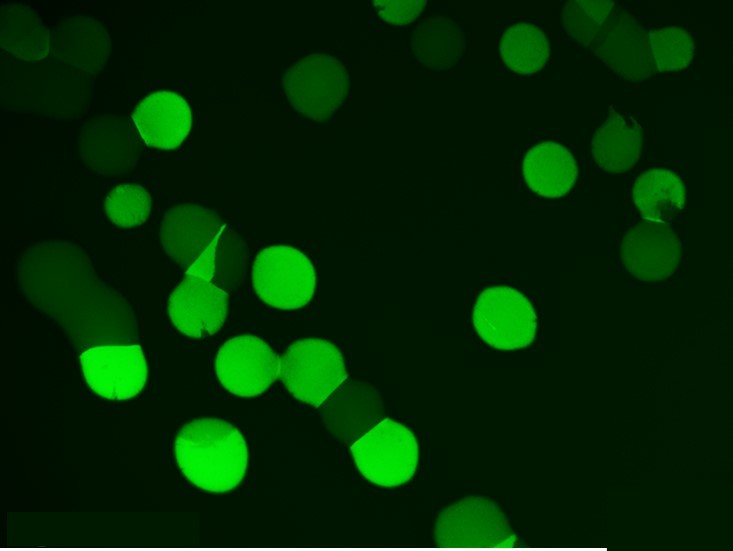 Auxotrophic bacteria rely on their environment to obtain essential amino acids. We discovered the heterogeneous expression of methionine transporters in an auxotrophic bacterium. The heterogeneity is strikingly stable, which makes that it becomes visible in bacterial colonies.