The nature and habitat of the earliest life on Earth is among the most compelling questions facing geomicrobiologists. Unfortunately, microbial fossils are rare and those that do exist provide little information about the physiological characteristics of these early lifeforms. Yet, the geologic rock record can provide clues to what microbial biogeochemical activities might have been taking place by characterizing the distribution of the isotopes of various elements. For example, the isotopes of sulfur compounds preserved in the rock record in the Dresser Formation of Australia suggest the presence of biological reduction of oxidized sulfur compounds like sulfate (SO42-) to sulfide as early as ~3.5 billion years ago (Ga). The Dresser Formation is an ancient volcanic hydrothermal system, similar perhaps, to modern day hydrothermal systems such as those in modern-day Yellowstone National Park.

Microorganisms that reduce or breathe oxidized sulfur compounds such as SO42- are incredibly important in contemporary global carbon and sulfur cycles and this is likely to be true over the past 3.5 Ga of Earth history. However, unlike in contemporary oxygen rich environments, SO42- is not thought to have been abundant prior to ~2.8 Ga. This is because sulfide minerals (i.e., pyrite), which are the primary source of SO42-, are not readily oxidized in the absence of oxygen. Therein lies the conundrum – how could the isotopic evidence for biological SO42- reduction have been generated on early Earth without an abundant source of SO42-?

Fig. 1. ‘MV2’ Pool in Yellowstone National Park, Wyoming USA, harbors archaeal organisms that were previously uncharacterized. Genomic characterization of these Archaea reveal some of the earliest known lineages of proteins that catalyze the reduction of sulfite to sulfide, a step that is also key in the reduction of SO42- to sulfide. In the paper, we argue that environments like ‘MV2’ pool may represent important analogs of early Earth environments, where we know that primitive sulfate/sulfite reducers were present 3.5 Ga.

In our recently published paper in The International Society for Microbiology Journal, we document a previously uncharacterized group of Archaea that characteristically inhabit moderately acidic hot springs (Fig. 1) and that also harbor some of the earliest-diverging proteins (Dsr proteins) that catalyze the key reaction in SO42- reduction: the reduction of sulfite (SO32-) to hydrogen sulfide (H2S) (Fig. 2). Detailed metabolic and phylogenetic analyses revealed that these organisms could not reduce SO42- but could reduce SO32-. Further, when we investigated the evolutionary history of their Dsr proteins, we found that the other early-diverging homologs were associated with organisms that are likely to only reduce SO32- and these were often recovered from hydrothermal environments. Thus, evolutionary data suggest that the ability to reduce SO32- predates the ability to reduce SO42-. Intuitively, this makes sense because SO32- is an intermediate in the reduction of SO42- to sulfide.

A potential problem for these newly characterized organisms is that SO32- is incredibly unstable in modern oxygenated environments since it rapidly oxidizes in the presence of oxygen to form SO42-. It is also destabilized by increasingly acidic water and by elevated temperatures. Thus, SO42- tends to be abundant in modern aquatic environments while SO32- is rare and organisms that require SO32- must inhabit oxygen-free environments that are continuously supplied with this compound. Sulfur dioxide is a common component of volcanic gases and it forms SO32- when it dissolves in water. Indeed, hot springs where we identified the early evolving SO32- dependent organisms are sourced by volcanic gases such as SO2 and they have moderately acidic pH and temperature. While these seem like odd environments for organisms to inhabit on modern Earth, they were likely much more widespread on an early Earth with higher levels of volcanic activity and without appreciable oxygen needed to drive the acidification of such habitats. Indeed, similar environments on early Earth could have harbored the ancestors of these newly characterized organisms.

Fig. 2. Phylogenetic reconstruction of the DsrA and DsrB protein subunits that catalyze the reduction of sulfite to sulfide. The figure is a modified version of Figure 3B within the published paper. DsrA and DsrB are thought to have originated after an evolutionary duplication event prior to its spread across Archaea and Bacteria. The ‘Root’ refers to the inferred evolutionary origin of both subunits, while the DsrA and DsrB evolutionary trajectories follow in the downward and rightward direction away from the root. The subunits comprised within the newly characterized Archaea from ‘MV2’ pool are highlighted in red.

In the paper, we argue that these collective observations suggest that the earliest “SO42-” reducers could have actually been SO32-reducers, analogous to those we describe in the manuscript. Additional work is underway to physiologically characterize these newly described organisms and to untangle whether organisms like them could have been responsible for early signatures of microbial activity preserved in rocks dating to 3.5 Ga. 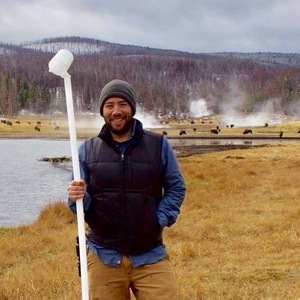 I'm an environmental microbiologist with interest in understanding how microbial populations interact with one another and their environments, both now and in the geologic past.
Follow