In search of new anti-biofilm agents from insects

Our paper published in NPJ Biofilms and Microbiomes describes the novel biofilm-busting activity of an insect antimicrobial peptide and its synergistic activity with a conventional antibiotic.
Krishnendu Mukherjee
Scientist/Project Leader, Institute of Hygiene, University of Muenster, Germany
Follow
Like Liked by Oded Béjà and 3 others

In April 2019, the United Nations published its groundbreaking report that antibiotic-resistant pathogens are expected to kill 10 million people by 2050. This report identifies shrinking industrial investments in antibiotic research as a formidable challenge to fight multidrug-resistant (MDR) bacteria. It is clear that without alternative strategies we cannot prevent death even from the simplest of infections in future. This global health emergency has united scientists at the Institute of Hygiene, University Hospital Muenster, and the Department of Bioresources, Fraunhofer Institute Giessen to participate in a common research program to fight resistant bugs. Since antibiotic resistance is a natural phenomenon, we believe that new anti-infectives can be discovered from living organisms that adapt to pathogens otherwise resistant to antibiotics. We investigate insects as they are the most successful organisms on earth in terms of their diversity and adaptability. We are convinced that the biodiversity among insect species is also mirrored by a high number of unique insect-derived bioactive substances that are lead to new drug development. Our main goal is to apply the fundamental understandings of insect biodiversity in developing new applications to cure diseases that affect millions of people in the world.

Bacteria often form biofilms to resist antibiotic treatment, and over 65 percent of all microbial and 80 percent of chronic infections are biofilm-related (NIH). Accordingly, improved strategies to prevent or treat biofilm formation are urgently needed from a clinical and public health perspective. We selected the Gram-negative bacterium uropathogenic Escherichia coli (UPEC) as a model system to identify novel biofilm-degrading natural compounds from insects. UPEC has a unique ability to form biofilms in host bladder epithelial cells and on diverse surfaces such as urinary catheters. Moreover, UPEC biofilms often serve as a source of recurrent infections, and most antibiotics are ineffective as a treatment option. In our recent work (Kalsy et al. NPJ Biofilms and Microbiomes. https://www.nature.com/articles/s41522-020-0116-3), we screened insect antimicrobial peptides (AMPs) and found that cecropin A (CecA) from the greater wax moth Galleria mellonella can destroy planktonic and biofilm-forming clinical UPEC strains. Cecropins were the first insect AMPs to be discovered and are known to kill Gram-negative bacteria by forming membrane pores. However, this specific biofilm-busting activity has not been reported or investigated before.

UPEC biofilms use multiple strategies to resist antibiotics, including extracellular appendages, impenetrable extracellular matrix (ECM), efflux pumps, and extracellular DNA (eDNA). We show that CecA either alone or in synergism with the antibiotic nalidixic acid can inhibit bacterial surface attachment, energy-dependent MDR efflux pumps and the release of eDNA (Figure 1). We conducted a serial passage experiment to report that these novel multi-target mechanisms of action ensure the slow emergence of resistance to the CecA + NAL combination. Our findings may pave the way for the development of new therapeutic strategies against UPEC and other biofilm-forming (multi-)resistant bacteria, using AMPs such as CecA alone or in concert with conventional antibiotics, inclusive of those no longer used as a monotherapy. 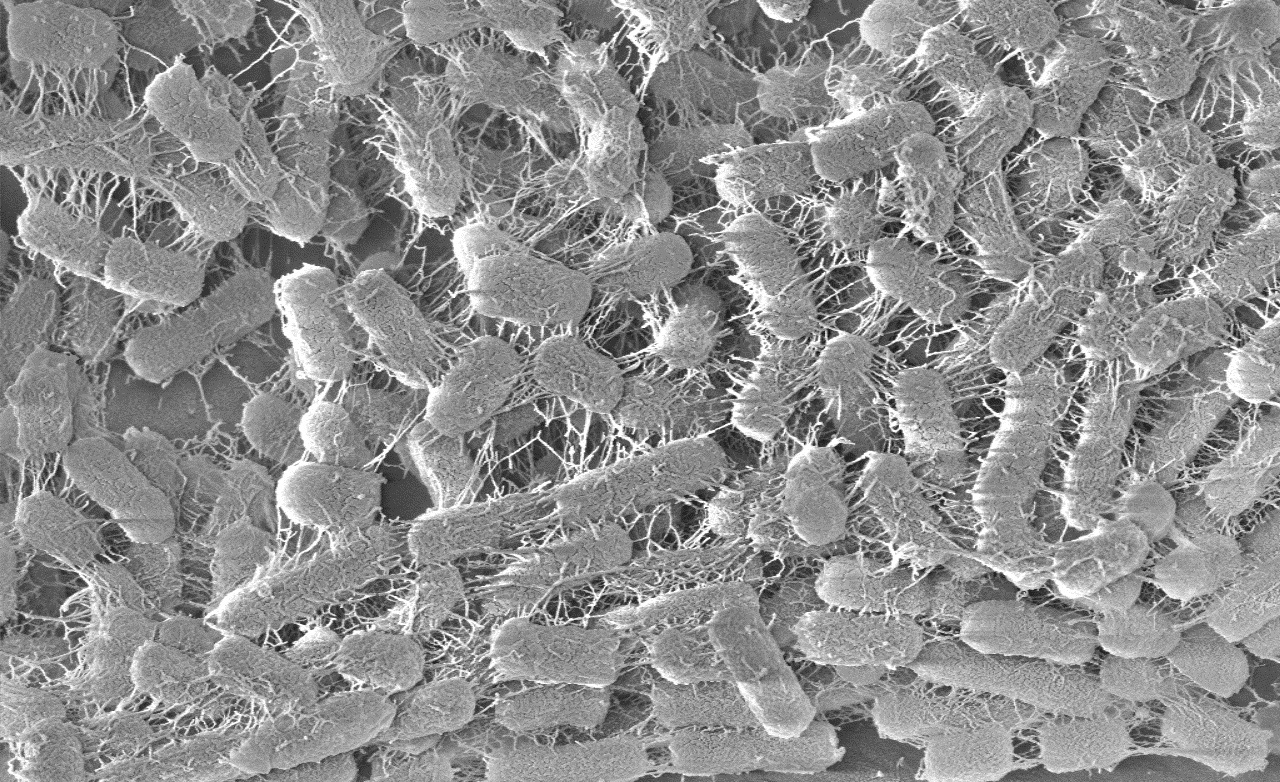 In search of new anti-biofilm agents from insects

Our paper published in NPJ Biofilms and Microbiomes describes the novel biofilm-busting activity of an insect antimicrobial peptide and its synergistic activity with a conventional antibiotic.