A window into the past of mercury microbiology

This study demonstrates the usability and sensitivity of reconstructing the paleodemographics of genes preserved in environmental archives, to track historical response of microbes to changes in the loadings of a globally distributed contaminant. It focuses on mercury (Hg).

Mercury (Hg) is a naturally occurring global pollutant that has, since the late 1700s, been increasingly remobilized in the environment by anthropogenic activities. The continued importance of Hg as a chemical of concern to human health was underscored by the recent ratification of the Minamata convention (UN, 2017), requiring governments to regulate Hg emissions, reducing Hg mining, supply, trade and waste of Hg to limit its environmental impacts.

The effectiveness of many of the 35 articles in the convention – as they pertain to: (i) controls on all lifecycle stages of mercury (e.g., emission reduction, waste management and trade practices), (ii) providing technical and financial support to the parties, and (iii) raising awareness – can be directly evaluated. For instance, we can assess if ambient air levels are increasing or decreasing and also model if emission changes are impacting these measured levels.  One area where data is lacking is in determining the lag in aquatic ecosystem response to a change in atmospheric Hg deposition. Here we focused our attention on the response of microbes to changes in historical Hg deposition, mostly resulting from anthropogenic activities.

The environmental dynamics of Hg are fundamentally controlled by microbes. Aquatic environments play an essential role in releasing bioavailable Hg in ecosystems, where it can be methylated and bioamplified in food webs, affecting the health of humans and wildlife. However, whereas the total concentration of metals can be determined from environmental archives, there is currently no means of tracking their bioavailable, and often toxic, fractions. For Hg in particular, this fraction represents a substrate for the production of toxic and bioaccumulative methylmercury. This critical knowledge gap potentially hinders policy development, because effective risk reduction strategies depend on a comprehensive understanding of past and present effects of contaminants on ecosystems and ultimately their impacts to human health.

To address this critical issue, we hypothesized that microbial DNA stored in environmental archives and coding for Hg detoxification metabolism, such as the mercuric reductase gene (merA), can be used to evaluate historical deposition of Hg. We predicted that increasing selective pressure from anthropogenic mercury would affect the evolutionary trajectory of aquatic microbes over broad continental scales and inform on the fraction of bioavailable Hg. For this, we recovered and analyzed DNA in dated sediment cores from Canada and Finland, and reconstructed the past demographics of microbes carrying genes encoding for MerA using models known as Bayesian relaxed molecular clocks.

These models have traditionally been used to infer divergence times among organisms, and have more recently flourished with the analysis of the evolutionary dynamics of epidemics, such as those caused by the Ebola and the Zika viruses (see http://virological.org/). Critically, the genome of these viruses can almost be analyzed in real time during the course of an outbreak. While these models still make a number of assumptions, they allow us to estimate the date when epidemics originated or the number of cases, that is, of infected people. In both instances, these estimates are remarkably in line with evidence collected by the more traditional epidemiological surveys. Our expectation was therefore that we should be able to use these models to reconstruct not the number of cases during a viral outbreak, but the number of microbes involved in detoxifying Hg during historical times, based on environmental DNA archives recovered by coring lake sediments – the deeper the core, the more ancient the environmental DNA.

We were encouraged to pursue this line of inquiry as our preliminary results were highly consistent with those from our first study (Poulain et al. 2015 ISME J.), for which merA sequences were obtained from clone libraries, from just a single lake in Canada. Here, using high throughput sequencing and sampling a wide variety of lakes, we found that the evolutionary dynamics of merA indeed exhibited a dramatic increase in the number of microbes involved in detoxifying Hg, starting at the end of the 18th century (estimated as 1783.8 ± 3.9 CE by our model). This dating of the increase coincides with the onset of the Industrial Revolution, and with independent measurements of atmospheric Hg concentrations.

Beyond a single lake, we show that this evolutionary response of genes involved in Hg detoxification was both swift and synchronous across two continents in the Northern Hemisphere. It is our goal to continue monitoring this evolutionary trajectory as the Minamata convention curbs Hg mobility in the environment. We are also curious and cautiously optimistic that applying this approach to study the biological history of other metals, for which detoxification and homeostasis are genetically coded in microbes, will yield new insights into metal cycling.

Ironing out the complexity of phytoplankton-iron interactions 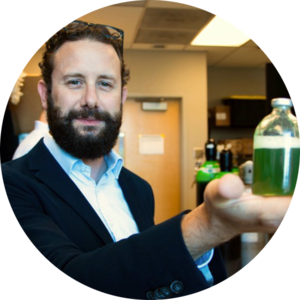