Not all influenza vaccines are given as shots in the arm.
John Tregoning
Author: Infectious. Reader in Respiratory Infections., Imperial College London
Follow
Like Liked by Raihan Shah Mahmud and 1 other
0

The immune system is complex and multi-faceted. We know what individual components do to prevent infection, but how they act together is unclear.

Influenza is a serious cause of death and disease, contributing to the winter healthcare burden. One approach to reduce this is vaccination. In addition to the injectable influenza vaccine, which is given as an intramuscular injection there is an intranasal vaccine. This vaccine is also referred to by its initials LAIV – live attenuated influenza vaccine. The vaccine is a live vaccine, that has been adapted to reduce its pathogenicity. Specifically, the vaccine virus was adapted so that it can only replicate at lower temperatures. This is important because there is a temperature differential across the airways: the nose, because it is drawing in cold air is cooler than the lungs. The nose is at approximately 30°C, compared to the lungs which are at 37°C. This means that viruses that can replicate at 30°C are restricted to the upper airways and therefore cannot cause severe disease. The vaccine virus is then administered by a nasal spray syringe, once it gets into the nose, it replicates and this replication is important in the induction of an immune response.

However, one of the problems with influenza is that the virus changes season on season, sometimes in small steps (antigen drift) but sometimes in much bigger jumps (antigen shift). This changing of the viral strain necessitates new vaccines each influenza season. Most of the variation comes through the surface antigens, haemagglutinin and neuraminidase, which are the H and N of influenza virus nomenclature. Luckily the same temperature sensitive attenuated vaccine virus strain can be used as a backbone into which different H and N genes can be substituted. However, to achieve greater coverage three or four (depending on manufacturer) different virus strains in the vaccine, normally two A strains (H1N1 and H3N2) and two B strains.

In the UK, LAIV has been recommend for all primary school age children (up to 11), and some other high risk groups. This decision is based in part on the herd protection that this vaccine could potentially have, protecting the elder generation by reducing the infectious reservoir. However, in recent years there have been some concerns with the efficacy of the LAIV – particularly in the USA where efficacy dropped from 85% before 2009 to 17% in 2013-14 which led to a reversal of the American  Advisory Committee on Immunization Practices to recommend suspension of LAIV between 2016 and 2018. We wanted to understand factors that affected the immunogenicity of this vaccine.

In a previous study, we had described how nasal antibodies, specifically of the IgA type were associated with reduced viral shedding after influenza infection (https://www.frontiersin.org/articles/10.3389/fmicb.2017.00900/full). So  now we wanted to look into the effect of immunisation of children with LAIV on IgA. In our recently published study (https://onlinelibrary.wiley.com/doi/full/10.1111/cei.13395) we saw that three out of the four strains in the vaccine were able to induce a significant increase in IgA. Interestingly the only strain not to induce an increase in IgA – H1N1 – was the one for which concerns have been raised for protective efficacy. Though it was not clear in this study why the H1 strain might behave differently.

In a separate study (https://www.thelancet.com/journals/lanres/article/PIIS2213-2600(19)30086-4/fulltext) in collaboration with Dr Thushan da Silva in Sheffield, we looked into potential reasons for the differences. By happy coincidence, Thushan ran clinical trials with LAIV over 2 seasons and the H1 vaccine strain was changed between the years from A/17/California/2009/38 (Cal09) to A/17/New York/15/5364 (NY15). This gave us an opportunity to understand a bit more about how vaccine strain changes can affect immunogenicity. Strikingly the change in vaccine led to a significant increase in vaccine response and this was linked to how good the vaccine was at replicating – the newer strain (NY15) replicated better both in vivo and in vitro and this was associated with stronger immune responses.

Based on these studies, we want to look at how vaccine replication is associated with immunogenicity and what viral factors enable enough replication to work as a vaccine without causing infection themselves. 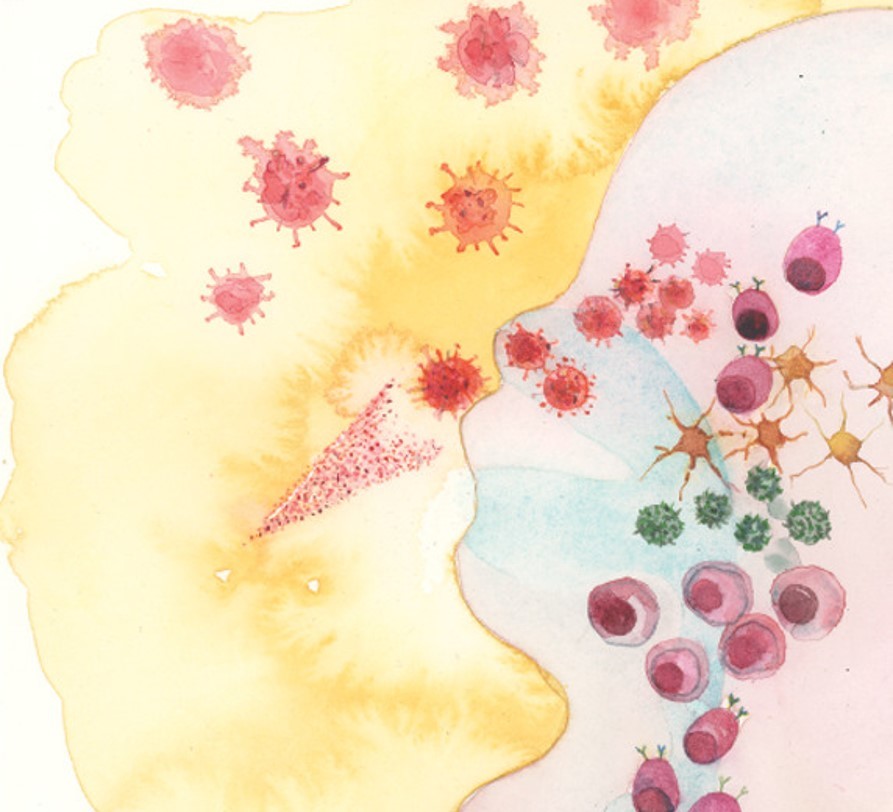 Not all influenza vaccines are given as shots in the arm.