Lactobacilli has been associated with vaginal protection from HIV infection. Here, we show that lactobacilli release extracellular vesicles that inhibit HIV infection, and this inhibition is mediated by altering viral Env proteins that mediate virus-cell surface interactions.

In general, it is well established that microbiota plays an important role in human physiology. In particular, it has been known for years that the vaginal microbiota, dominated mostly by Lactobacillus spp., plays important role in woman’s health.
Lactobacilli defend women from numerous urogenital pathogens, including HIV-1. However, the mechanisms of this phenomenon are largely unknown and investigating them in human body is difficult. We therefore established a laboratory-controlled system of cervico-vaginal tissues that retain native cytoarchitecture, as well as the pattern of expression of key surface molecules relevant to HIV-1 infection.
Dr. Rogers Ñahui-Palomino, a post-doctoral fellow in the laboratory of Dr. Leonid Margolis at the National Institutes of Child Health and Human Development, NIH, together with other members of the laboratory and in collaboration with the team of Dr. Beatrice Vitali at the University of Bologna (Italy), used this ex vivo tissue system to study the protective mechanisms of lactobacilli against HIV-1 infection. In our previous study, he found that several Lactobacillus strains, isolated from the vaginas of healthy women by our Italian colleagues at the University of Bologna, protect tissues from HIV-1 infection (Ñahui Palomino et al., 2017).
In this work, he found that the protective effect against HIV-1 infection is also conferred by nanosized extracellular vesicles (EVs) released by these symbiotic bacteria. EVs are released by virtually every kind of cell and they are important for cell-cell communications, likely due to their trafficking of bioactive molecules. We demonstrated that such vesicles, in part, protect human cells and tissues from HIV-1 infection. Furthermore, we found that in the presence of Lactobacillus-derived EVs, HIV-1 binds to its target cells much less efficiently than in EV-free viruses.
The next question that was addressed was whether these bacterial EVs make the target cells less infectable or they make viruses less capable of infecting cells. Our experiments showed that cells pretreated with vesicles remained easily infectable by HIV-1. Therefore, virions became incapacitated when incubated with Lactobacillus-derived EVs. And our following experiments demonstrated why: after HIV-1 virions were incubated with bacterial EVs, viral Env, the protein that mediates HIV-cell membrane binding and fusion, became less exposed on virions.
In future experiments, we hope to identify the molecules associated with bacterial EVs that harm HIV-1. Initial steps were taken in this direction by identifying differences in the protein and metabolite composition between bacterial EVs that suppress and do not suppress HIV-1 infection. We hope that understanding the protective mechanisms of Lactobacillus on HIV-1 infection will eventually lead to the development of new protective strategies against HIV-1 vaginal transmission. 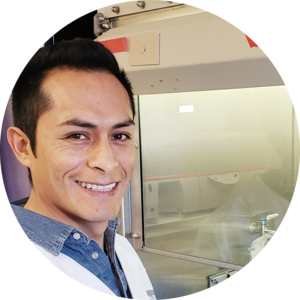