CRISPR-Cas and restriction enzymes are bacterial immune systems that target bacteriophage DNA during infection. Here, a phage is identified that assembles a protein shell around its DNA to protect it from these potent DNA-cleaving enzymes.

Bacteriophages are bacterial viruses that exhibit either obligately lytic lifestyles or temperate ones, where they integrate in the bacterial genome as prophages. During both life cycles, phages require mechanisms to inhibit or evade bacterial immune processes.

During a search for new prophage-host interaction paradigms, inhibitors of CRISPR-Cas immunity, or “anti-CRISPRs” were discovered (Bondy-Denomy et al., Nature, 2013). To expand our knowledge of the diversity among anti-CRISPRs, Joe Bondy-Denomy began testing lytic phages for CRISPR resistance and in 2014, noted that phage ΦKZ was resistant to targeting by type I CRISPR-Cas. This suggested that the phage encoded an anti-CRISPR. Lacking known anti-CRISPR genes, ΦKZ promised a novel means of immune evasion.

When the Bondy-Denomy lab started at UCSF, this phage quickly became a focus. In attempts to use orthogonal CRISPR-Cas systems to mutate ΦKZ and determine genes involved in immune resistance, it became obvious that it was also resistant to Cas9 and Cas12a. Even EcoRI was useless against this phage. We presumed that ΦKZ DNA was modified but this was quickly ruled out by successful restriction enzyme and Cas9 in vitro digests with the phage DNA. As we planned and began to execute genetic screens to find ΦKZ mutants sensitive to Cas9, a remarkable breakthrough came: Vorrapon Chaikeeratisak, Joe Pogliano, and colleagues at UCSD published their landmark discovery of a nucleus-like structure, built by a related phage (Chaikeeratisak et al., Science, 2017). This protein shell surrounds the phage DNA, allowing DNA replication and transcription proteins inside, but excluding proteins involved in translation. We hypothesized that this barrier could serve to physically exclude bacterial nucleases from their DNA substrate. We moved on to testing this.

Microscopy by Eliza Nieweglowska of David Agard’s lab and Dr. Sutharsan Govindarajan, showed that CRISPR and restriction nucleases were indeed excluded from the viral DNA compartment. We were further encouraged by my finding that the RNA-targeting Cas13a could provide immunity against ΦKZ. Translation occurs in the cytoplasm, where mRNAs are not protected by ΦKZ’s shell. However, neither of these results directly demonstrated that physical separation by the shell was causative of protection from nucleases. In order to show that robustly, we would have to circumvent the shell.

Our findings represent the broadest example of immune evasion by a bacteriophage to date. This discovery demonstrates that ΦKZ’s shell enacts discrimination between beneficial DNA-binding proteins and destructive nucleases, albeit through mechanisms that are still unclear. This work demonstrates how a strong selective pressure has driven such an elaborate apparatus for immune evasion. We are left wondering what else phages do to avoid immunity and are again reminded of the value of continuing to explore basic phage biology.

How and Where HIV Hides 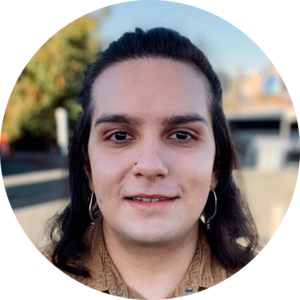