A community from Nature Microbiology
Contributor
After the Paper , World AIDS Day 2019

The first structures of the trimeric HIV envelope glycoprotein (Env), solved in 2013 using cryoEM and X-ray crystallography, ushered in a new age of rational, structure-based HIV vaccine design. After almost 30 years, the molecular structure was revealed of the HIV surface glycoprotein that is the target for neutralizing antibodies, and therefore central to HIV vaccine development. The main problem thwarting the field had been how to generate a stable soluble form of Env that could be used for structural and functional studies. In 2012, that problem was finally solved after a 20-year effort spearheaded in the lab of John Moore at Cornell, including seminal contributions from James Binley, Rogier Sanders as well as the labs of Ian Wilson and Andrew Ward*. The molecular details that were derived from these structures were immediately useful in understanding how neutralizing antibodies were able to attack the heavily shielded Env trimer on the virus and revealed potential means to exploit the weak spots on Env. Additionally, the structures, which were made publicly available upon publication, provided researchers around the world an opportunity conduct structure-based vaccine design and improve and embellish on the original design. Each atomic structure can be downloaded onto a computer and loaded into a 3D graphics program, rotated around, and redesigned by molecular architects that ply their wares as vaccine designers. Importantly, the successful design of the original Env based on a single HIV-1 strain BG505 has now been shown to be transferable to different strains and subtypes of HIV-1.

Excitingly, this original Env trimer, affectionately known as BG505 SOSIP.664 (to reflect the last amino acid in the soluble stable construct), entered human clinical trials earlier in 2019. While 6 years may seem like a long time from discovery to a clinical trial, the manufacture of this very heavily glycosylated protein under good manufacturing practices (GMP), with concomitant preclinical characterization and toxicology, was surprisingly quick given its incredible complexity. Importantly, this process also paved the way to more rapidly translate further enhanced versions of the SOSIP Env trimer into the clinic. In fact, many versions of SOSIP Env trimer are now well on their way to clinical trials, each of which will generate important information for further improvements in what we envision as an iterative cycle of optimization. Structural biology continues to play a critical role in this process and there are now astonishingly around 100 cryo-EM and X-ray structures of Env trimers that have been solved since our original publications. Each structure reveals some new important atomic-level nuances that can be harnessed to improve a vaccine. Because of the importance of these structures, we have also developed new and faster ways to solve them and even invented new methods to solve many structures at the same time, further accelerating progress. In that regard, the cryo-EM resolution revolution, which occurred in the past few years since these first Env structures were determined, has brought electron microscopy into the forefront for structural determination especially for large and complex macromolecules that can be difficult to crystallize. From a broader perspective, HIV has been, and continues to be, at the bleeding edge of structure-based vaccine design, providing new analytical tools, methods and insights that are being applied to other pathogens such as influenza, Ebola, coronaviruses, and malaria, among others. 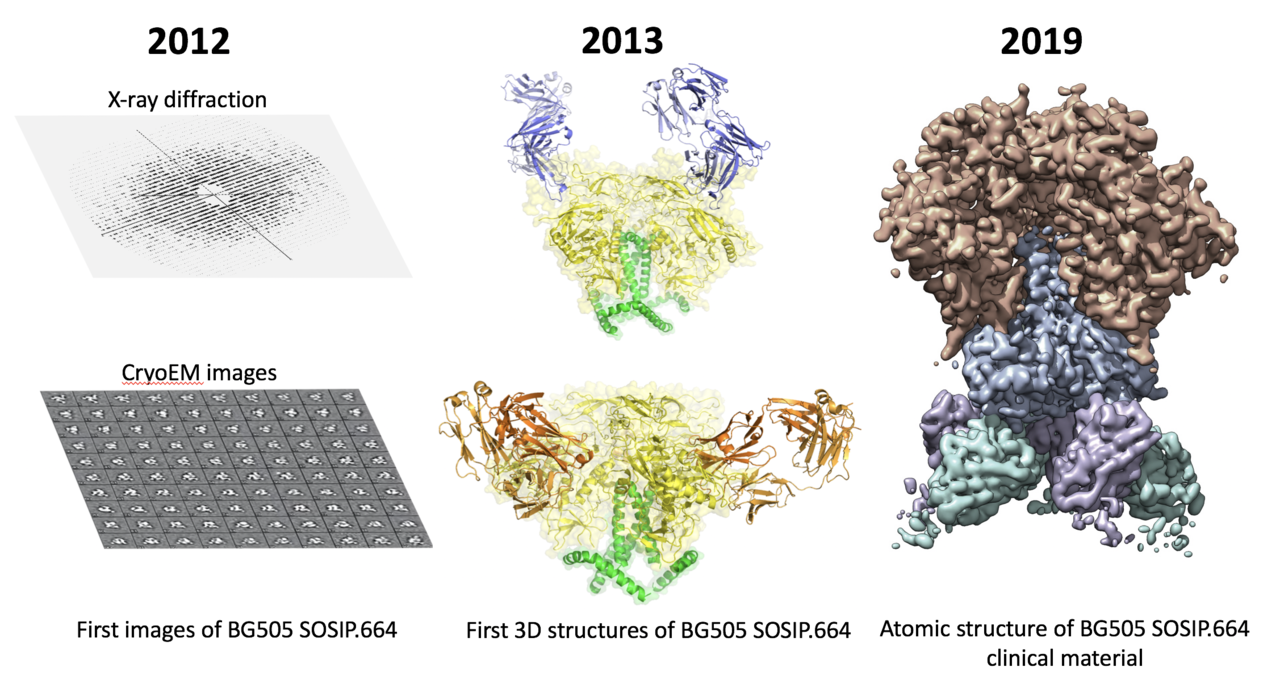 By Andrew Ward and Ian Wilson