HIV knocks on the door

In 1981, Michael Gottlieb and colleagues published the first detailed analysis of the immune defects of AIDS patients1, pinpointing the disappearance of a particular type of immune cell, the T-helper lymphocyte, from the blood and lymph glands.
Robin Weiss
Emeritus Professor, University College London
Follow
Like Liked by Ben Johnson and 1 other

In 1981, Michael Gottlieb and colleagues published the first detailed analysis of the immune defects of AIDS patients 1, pinpointing the disappearance of a particular type of immune cell, the T-helper lymphocyte, from the blood and lymph glands. The salient laboratory marker for T-helper cells was the cell surface antigen T4, later called CD4. In HIV infection, the loss of CD4+ cells prevents the rest of the immune system functioning in a coordinated way, and to this day, CD4 cell counts are used as an indicator of the course of disease.

Soon after the initial isolation of HIV, David Klatzmann and colleagues in Paris showed that HIV selectively grows in – and destroys – CD4+ cells in culture, thereby mimicking the loss of CD4+ cells seen in AIDS patient2. This raised the question how the virus recognized and entered CD4+ cells. The initial answer turned out to be simple: both Klatzmann3 and my colleagues4 found that HIV docks onto the same cell surface antigen, CD4, that haematologists use to recognize this type of cell. Klatzmann found that a monoclonal antibody to CD4 blocked HIV replication measured by reverse transcriptase activity released into the culture medium, whereas in our study with Peter Beverley, we tested 160 monoclonal antibodies to various cell surface antigens expressed on T-helper cells, among which all 14 specific for CD4 neutralized HIV; the antibodies inhibited of cell-cell fusion and blocked the entry of a reporter virus or ‘pseudotype’ bearing the outer envelope of HIV.

The discovery that HIV docks onto cellular CD4 provided insight on the first step of infection of immune cells by HIV. The explanation of how HIV causes AIDS is, of course, more complex5. In addition to T-helper cells, HIV also infects macrophages (which express low levels of CD4). Moreover, a proportion of T-helper cells are not directly destroyed by HIV but suffer collateral damage during aberrant signalling between cells in the immune system generated by HIV infection. Paradoxically, although the end result of HIV infection, AIDS, is immune suppression, the pathway leading to this eventual collapse involves over-activation of components of the immune system, especially in the gut.

The natural function of CD4 is to interact with major compatibility antigens type II on antigen presenting cells. The additional importance of CD4 in HIV infection placed the CD4 molecule on centre stage for immunology and AIDS studies. Mapping the regions of the CD4 molecule that the HIV envelope glycoprotein gp120 recognised showed a common recognition site for HIV-1, HIV-2 and simian immunodeficiency viruses6, indicating an ancient interaction between primate lentiviruses and CD4. Some of the most potent broadly neutralizing antibodies being exploited for HIV vaccines, therapeutics and prevention target the CD4 recognition site on gp1207.

Not long after the identification of CD4 as the high affinity cellular receptor for HIV, the cDNA encoding CD4 was cloned by Paul Maddon and Dan Littman then working with Richard Axel at Columbia University. Genetically engineered soluble forms of CD4 powerfully neutralised HIV infection and showed initial promise as potential drugs8, although it later became apparent that they performed weakly against the majority of HIV strains in infected people.

Another important outcome of these studies was the realisation that, while CD4 was necessary for infection, it was not sufficient to let HIV penetrate the cell surface. We found that human CD4 expressed on mouse cell lines bound gp120, but did not make the cells susceptible to pseudotype infection9. This observation indicated that a second, unknown human-specific component, or coreceptor, is required for HIV to traverse the cell membrane. In retrospect, it seems prescient that we had entitled our paper3 “The CD4 (T4) antigen is a component of the receptor for the AIDS retrovirus”.

It took a further 10 years before the coreceptor was identified to be one of two chemokine receptors, either CCR5 or CXCR4. The story of that discovery is told by John Moore in an accompanying piece10. 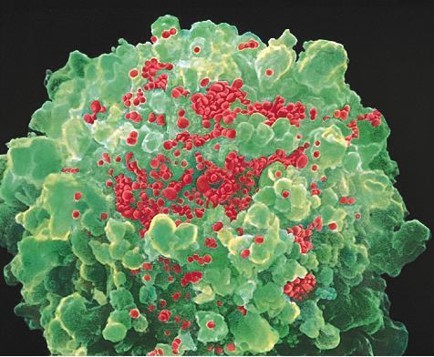 HIV knocks on the door

In 1981, Michael Gottlieb and colleagues published the first detailed analysis of the immune defects of AIDS patients1, pinpointing the disappearance of a particular type of immune cell, the T-helper lymphocyte, from the blood and lymph glands.