How HIV enters cells: “It was the best of times, it was the worst of times”

In the spring of 1996, it finally started to become clear how HIV enters the CD4-positive cells it infects. The key role of CD4 as a virus receptor had been known for over a decade, but it was well understood that another key factor must be involved, a co-receptor. At a Keystone meeting, the NIH’s Ed Berger announced that a cell surface protein he called “Fusin” (now known as CXCR4) fulfilled that role 1. But Fusin was not the whole story, as only a minor subset of HIV strains could use it for cell entry; another factor was sitting out there, waiting to be found. Fusin being a chemokine receptor was an important clue as to what the missing factor would probably be. A 1995 paper from Bob Gallo’s and Paolo Lusso’s groups showing that specific chemokines could inhibit HIV replication in cell cultures also seemed relevant 2. Multiple groups put two and two together and sought a chemokine receptor that would support the entry of the majority of HIV strains, the ones that are most commonly transmitted between people. The race was on…

At that time, I headed a small research group at the Aaron Diamond AIDS Research Center (ADARC) in New York City. Various faculty members worked independently and competitively on the “missing co-receptor” problem, each with different external collaborators. It was not a pleasant experience, but it was one that taught me a fair amount about the real world of academic life when the stakes are perceived to be high.

Despite, or perhaps because of, the obnoxious environment, the pace of research was rapid. That was also true of work elsewhere, as multiple groups were known to be active including Ed Berger’s, Bob Doms’ and Joe Sodroski’s. Papers started to be drafted. My group’s manuscript reported that the chemokines described by the Gallo/Lusso group were specific inhibitors of HIV-cell fusion. My faculty colleague Rick Koup wrote another showing that some humans who were highly resistant to HIV infection produced very high levels of the same chemokines. The two papers were submitted separately but, by agreement, simultaneously to ‘Nature’. Some weeks later, the reviews were generally very positive but one reviewer, and the editor, insisted that the two papers be melded into one. Both senior authors were seriously taken aback, and in the 23 years since I have never heard of a similar demand being placed on two independently submitted papers. Moreover, the two first authors, both faculty-caliber post-docs, were quite upset. This was an era before “asterisks” emerged for status-sharing, and they were rightly concerned about losing recognition.  An additional but welcome complexity was that the sequence of the CC-CKR-5 (now CCR5) receptor had just been published, and my group had used the information to prove that this was the missing co-receptor and that the inhibitory chemokines worked by blocking it. But the other groups at ADARC and elsewhere also had the same or similar data, so time was short. A compromise was reached whereby the two papers were married together and beefed up with the CC-CKR-5 data; the post-docs (Tanya Dragic and Bill Paxton) would take the first and last positions 3. While few were thrilled, all could live with it. The revised paper was rapidly accepted, and became one of five that were, in effect, co-published in Nature, Science and Cell 3-7.

The papers made an immediate impact. Within weeks, Tony Fauci, then and now NIAID Director, and Harold Varmus, then NIH Director, outlined the work to President Bill Clinton and Vice-President Al Gore 8. One does wonder how much attention the President paid to a lecture about how HIV can be transmitted in the Oval Office, but at least he was fully briefed… New drugs and prevention science strategies based on CCR5 research emerged in the next decade 9.

The ADARC faculty members most involved in the co-receptor research all left within a few years, which was no coincidence. I continued to work on CCR5 for around 15 years, but nowadays focus only on HIV vaccine design and development. The various skill-sets and experiences learned in 1996 have proven useful in that arena too… 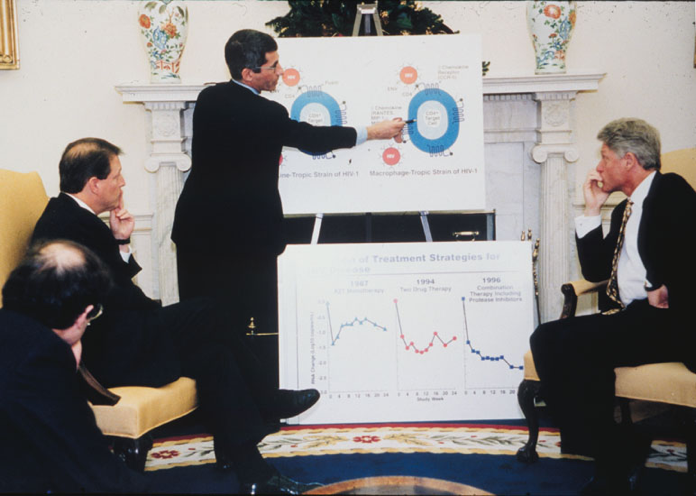 How HIV enters cells: “It was the best of times, it was the worst of times”