Soil is home to a huge number of bacteria with high diversity. Just one gram of soil can contain around 1 billion of bacterial cells.  Actinobacteria are one of the most abundant bacterial phyla in soil. Amongst them, Streptomyces is the best studied genus. Their enormous biotechnological and medical relevance is why they are referred to as Nature’s medicine makers (Hopwood, 2007). Antibiotics such as streptomycin, vancomycin and chloramphenicol are produced by these bacteria (Barka et al., 2016). However, streptomycetes are also famous for yet another characteristic, namely their smell. The smell of bacteria is caused by volatile compounds (VCs) that easily evaporate into the air. VCs can be grouped into diverse chemical classes that arise from many different biosynthetic pathways and therefore may play important biological roles (Schulz & Dickschat, 2007). VCs have been shown to act in long distance interactions between microorganisms and plants and as antifungals (Schulz-Bohm et al., 2017). In our daily life, we are continuously exposed to VCs, for example, a walk in the forest confronts you with the typical earthy smell of soil, which is especially prominent after a spell of rain. That smell is called petrichor and is mainly due to the VC geosmin produced by soil bacteria. Streptomycetes produce large amounts of geosmin (Gerber and Lechevalier, 1965), and it is the first thing you notice when you enter our microbiology lab. Streptomycetes produce many other VCs, and we wanted to discover the biological roles of these chemically diverse molecules.

How it all started

In our initial screenings we were surprised to see that streptomycetes produce VCs that suppress the growth of other bacteria from a distance. Our work shows that streptomycetes can inhibit the growth of other bacteria by producing large amounts of ammonia, particularly from the degradation of glycine, an amino acid that is abundant in soil and in plant root exudates. Streptomyces mutants disrupted in glycine metabolism were no longer able to produce ammonia at amounts that were sufficient to inhibit the growth of their neighboring bacteria.

How we study volatile-mediated interactions among microbes in the laboratory. Drawing: Henk van Ruitenbeek

From the lab to real-life conditions

To see if our findings in lab experiments are also ecologically relevant, we tested if streptomycetes grown in soil could inhibit growth of other bacteria from a distance. Indeed, streptomycetes produced so much ammonia in soil containing glycine, that the growth of the test microorganisms was inhibited, even at centimeters above the soil surface. Streptomyces mutants unable to metabolize glycine did not inhibit growth of the bacteria above ground. These results suggest that ammonia may indeed be used by these bacteria as an offensive weapon.

Every action has a reaction

Interaction is a two-way street, and therefore we looked into how target bacteria responded to the challenge by the VC ammonia. We discovered spontaneous ammonia-resistant mutants of Escherichia coli that close its windows as it were; by reducing the expression major outer membrane porins (the gateway of small hydrophilic compounds into the cell). They achieved this by down-regulating the porin master regulator OmpR.

We anticipated that there may be cross-talk between the VCs and soluble antibiotic compounds produced by streptomycetes. Therefore, we had a look whether ammonia could modify the concentration at which canonical antibiotics inhibit growth of other bacteria. Indeed, in the presence of ammonia-producing streptomycetes, the sensitivity of bacteria like Bacillus subtilis and E. coli towards antibiotics like ampicillin and erythromycin was significantly enhanced.

Our results hint at the important ecological role of VCs in the natural (soil) environment, not just as means of communication, but also as weapons. The activity of VCs as antifungals has been well established (Wang et al., 2013) but we believe that also bacteria use VCs in offensive strategies. In particular, a small low-cost molecule such as ammonia can have a big impact in the environment, both as antibiotic and possibly also by making other antibiotics more effective. The volatile antibiotic potential of bacteria is an exciting new topic that deserves more attention, both for ecological studies and for agricultural, medical and biotechnological applications.

Impression of van the microbial diversity and interactions in soil. Drawing: Henk Ruitenbeek.

Eukaryotes in the non-human primate gut 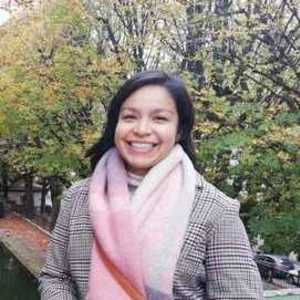