Eukaryotes in the non-human primate gut

The mammalian gut is home to diverse microbes collectively known as the gut microbiome. A wealth of data has demonstrated that the bacteria living in these micro-ecosystems have a profound impact on the health, development, and digestive function of their host. But what about the other organisms that live alongside them? We know that eukaryotes (and viruses, but that’s a story for another day) also live in the gut, but comparatively few studies have examined their diversity and ecological significance. Eukaryotes are often studied as parasites, but there are many non-pathogenic eukaryotes that inhabit the gut of diverse species. Shifts in the bacterial community living in the gut of various organisms have been linked to the presence or absence of particular eukaryotes [1,2,3,4]. This has prompted some researchers to assert that the lack of consideration of eukaryotes when describing the gut ecosystem is akin to ignoring the ecological impact of keystone predators in macroecosystems [5]. It is therefore imperative that we start to include gut-associated eukaryotes in narratives exploring the diversity and ecological function of the mammalian gut microbiome. Are they structured by diet or host phylogeny? What rules govern their assembly and distribution in the gut? How do they interact with other members of the ecosystem? What additional information can they provide about the evolution of the gut microbiome?

It’s these types of questions that motivated our study “Biodiversity of protists and nematodes in the wild non-human primate gut”. We obtained DNA from 62 non-human primates (NHP) representing 16 diverse species to better understand the distribution of gut eukaryotes in ecological distinct but phylogenetically-related host species. The resulting dataset is a mixture of host-associated and transient or dietary microbes, with the highest diversity of gut-associated eukaryotes in our African monkeys. In contrast to the previously published bacterial gut community [6], we did not find a consistent pattern structured by host phylogeny or diet. Instead (and most exciting to me), our results open up questions about the impact of individual dynamics, host behavior, and the local environment on the eukaryotes that live in the gut. For example, do large terrestrial NHP that have extremely flexible diets, like baboons, harbor more diversity simply because they are in contact with sources of transmission more often than NHP that live the majority of their lives in trees (e.g., Verreaux’s sifakas)? Moreover, is the bacterial community similarly affected? By comparing the bacterial and eukaryotic component of the gut microbiome across more diverse species we can begin to unravel these patterns and better understand the role of eukaryotes in mammalian gut microbiome evolution! 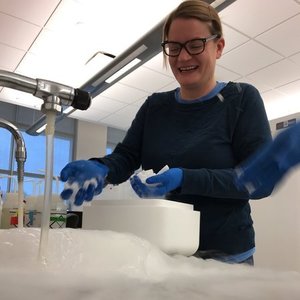 I'm a molecular anthropologist interested in the ways in which microbes can tell us what it means, biologically, to be human. I'm particularly interested in microbial eukaryotes that live in the human and non-human primate gut.
Follow