A genomic view of a coral holobiont

The recovery of metagenome-assembled genomes from the coral Porites lutea, its dinoflagellate symbiont, and its bacterial and archaeal populations, enabled comparative genomic identification of functions important for host–microbe interactions and nutritional associations.

When I tell people that I study coral-associated microbes, they inevitably ask 3 questions.

First, they want to know if I spend my time scuba diving in exotic locations, communing with sea life like Ariel from the little mermaid. While there are certainly coral researchers that are lucky enough to spend lots of time diving on reefs, I am not one of them. The truth is that I am equal parts microbiologist and bioinformatician, which means that I spend the vast majority of my time at the computer. Coral collection is left up to more capable members of the team, and I wouldn’t know what to do with the coral anyway. This paper is the result of the efforts of the Great Barrier Reef Foundation's ReFeGe2020 consortium (www.refuge202.com), which involved field researchers, laboratory-based scientists, and bioinformaticians. For example, it turns out it’s often really hard to tell coral species apart sometimes, so we needed experts who can identify corals in the field and have the diving skills and permits needed to collect them. Also, I know very little about the bizarre world of eukaryote genomics, so we collaborate with coral and algal biologists and bioinformaticians. See our other work on the corals1 and their Symbiodiniaceae symbionts (https://go.nature.com/2KMFMJB). Big projects take big teams, and we have to thank David Bourne for taking on the task of coordinating our crew.

Second, they want to know “how the corals are doing”, and unfortunately the answer is that reefs across the world are in deep trouble. Although perhaps the best managed reef in the world, the Great Barrier Reef (GBR) is suffering extensive coral cover decline due to ocean warming (i.e. climate change). This may be common knowledge, but I don’t think that the general public are aware of the scope of the problem. In 2016 and 2017, nearly 50% of all corals on the GBR died2,3 and we don’t see this trajectory reversing so long as carbon emissions remain at current levels. Take a moment to let that statistic sink in. Half of the GBR, in just two years! That figure doesn’t take into account the fact that coral reefs support a massive number of other marine species, including fish, sea stars, nudibranchs, anemones (and Nemo), and the list goes on. Corals are often called the rainforest of the sea because they boast such high biodiversity. Imagine loosing half of the Amazon rainforest in just two years.  So, what do we do about it? To be frank, by far the most straight forward, logical, and effective thing we can do is to significantly lower carbon emissions, and that’s something we can all affect with our votes and personal choices. But as scientists, we can also try to understand what makes corals tick to devise ways to make them more resilient. As beloved as coral reefs are, there are still fundamental gaps in our knowledge of coral biology.

As corals grow, the nooks and crannies they build become habitats for a wide variety of occupants, like the Christmas tree worms shown living on this Poritid coral. Without corals, the sea stars and nudibranchs living on the coral, polychaetes burrowing their way through the coral skeleton, the fish living in the gaps, and many more species would be lost. Photo credit: Tullia Isotta Terraneo, King Abdullah University of Science and Technology, Saudi Arabia.

This brings us to the third question: “so how does your research help coral reefs?”  Firstly, we have to understand that corals are considered to be meta-organisms or “holobionts.” That is, they depend on microorganisms to survive. The relationship between corals and their algal partners (Symbiodiniaceae) has been studied for a long time now. The algae make sugar via photosynthesis and pass it on to the corals as food. If the corals get too hot, they eject the algae in a process called “bleaching” and the coral ultimately dies if temperatures remain elevated for too long, preventing re-establishment of the symbiosis. Much less understood is the relationship between corals and the bacterial and archaeal communities that live in and on them, and that’s the knowledge gap we aim to help close with our research. It has been proposed that the microbes may be involved with nutrient cycling within the coral or the production of vitamins that the coral could use, suggesting that these microbes would therefore critical for coral health. However, these inferences were only made based on marker gene studies that give information on the phylogenetic identity of the microbes, but not what the microorganisms do.

To better understand how these microbes might interact with corals, we sequenced the genomes of the coral host Porites lutea, its associated Symbiodiniaceae algae (Cladocopium C15), and 52 of its associated bacteria and archaea. By examining the genes that each holobiont member possesses, we can infer how the symbiosis might work. For example, we show that the coral host, Porites lutea, does not have the genes to produce several essential B-vitamins, and neither does its algal partner. These pathways are, however, found abundantly in the bacterial and archaeal populations. Interestingly, we also find that there are both bacteria and archaea that can fix carbon, similar to the Symbiodiniaceae. Although we suspect that Symbiodiniaceae produce the bulk of fixed carbon in healthy corals, it’s interesting to speculate on whether the presence of carbon-fixing bacteria and archaea might influence coral resilience during bleaching when the Symbiodiniaceae are not present. Interestingly, some of the microbes that are capable of carrying out these tasks are archaea (Thaumarchaeota), which are frequently overlooked because a large portion coral-associated microbial community surveys focus strictly on bacteria.

Exciting efforts are underway to leverage bacteria and archaea in the form of probiotics4 to improve coral resilience to climate change, and we hope that our findings here can be used to guide which microbes to select. In addition, more controversial approaches such as genetically manipulating microbes for the same reasons5 have been proposed, but for this to work, we would need to know what specific microbial genes and traits might benefit corals. We hope that our work will be useful here as well to both guide the work and make it a safe approach.

A massive coral colony (distantly related to Porites) from the Halmahera Sea in Indonesia. One thing I learned recently from David that blew my mind is Porites species generally grow just a few centimetres per year, so colonies this big are likely to be several hundred years old. We revere trees that have stood such a test of time, and I think we should do the same for corals. Photo credit: Anna Roik, GEOMAR Helmholtz Centre for Ocean Research, Germany.

*We dedicate this effort to the memory of Sylvain Forêt who tragically passed away on the 17th of December 2016: Sylvain was central to this consortium, an inspiration to us all for his humour, insight, knowledge and character. He unfortunately will not see the outcomes of this work but without him we would never have come so far. A dear friend has been taken too early but his legacy will continue.

A genomic view of the marine sponge microbiome 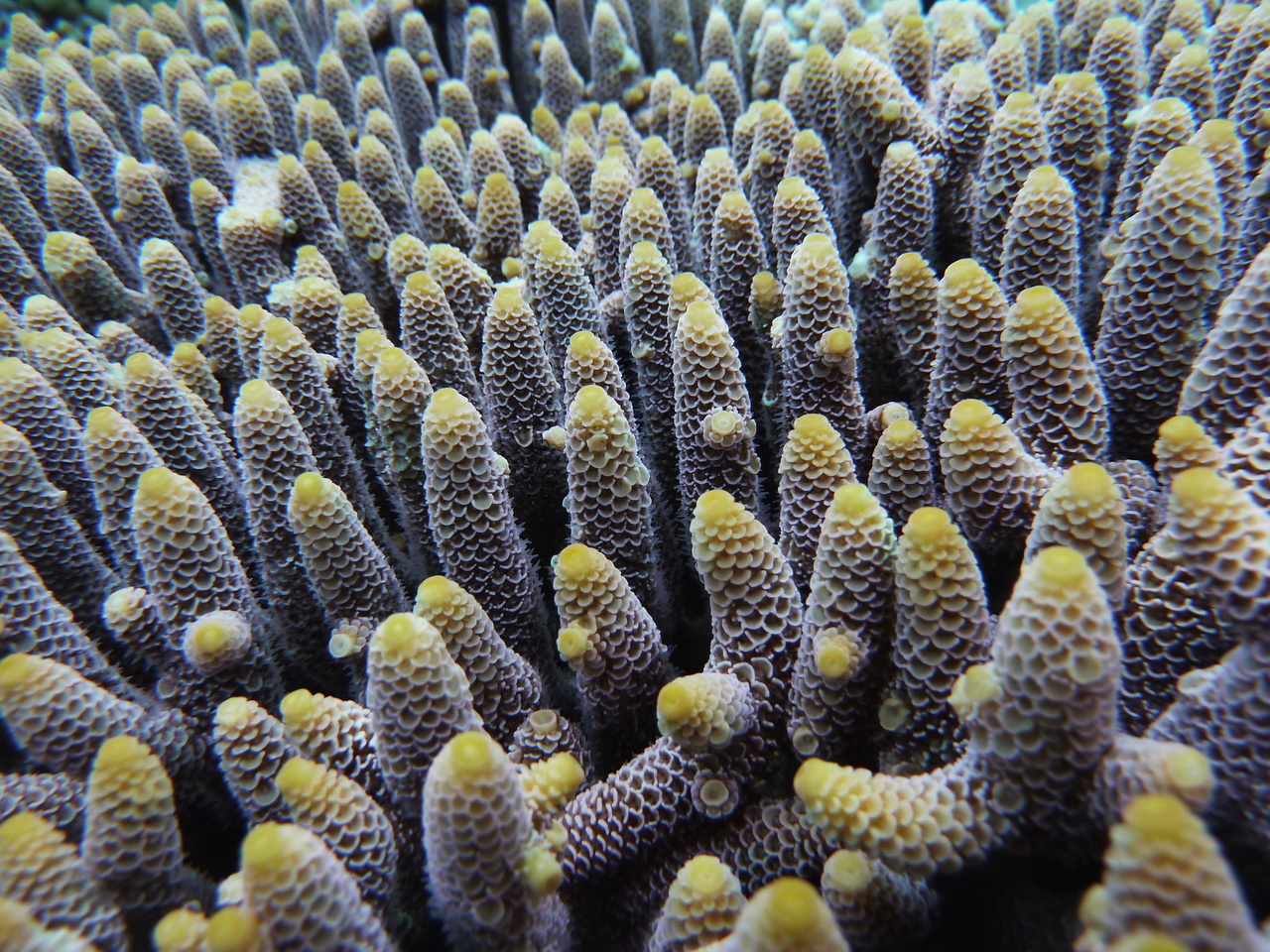 A genomic view of a coral holobiont