Zika and the earliest stages of development

Accounting for 2-3% of all congenital abnormalities, perinatal infection is one of the major causes of maternal and fetal illness. Zika virus (ZIKV) infection results in an increased risk of spontaneous abortion, although the underlying mechanisms of fetal loss remain poorly understood. The recent ZIKV epidemic became a public health concern as infection in pregnant woman not only causes abortion and poor fetal growth, but also severe neurological consequences such as microcephaly. Notably, the most severe fetal abnormalities have been associated with infection during the first and second trimester of pregnancy.

The Shuibing Chen laboratory (http://chen-stemcell-lab.com/index.html) uses human pluripotent stem cells (hPSCs) and high throughput chemical and genetic screens as a platform to study diseases, including diabetes, cancer, and infectious diseases. Due to the lack of therapeutics and lack of understanding of vertical transmission during the ZIKV outbreak, the laboratory utilized this unique platform to model this infectious disease. The characterization of our hPSC-derived trophoblast-like cells revealed that at day four they most closely resemble trophectoderm cells, the outer layer of the developing blastocyst that gives rise to the placenta. This model allowed us to investigate the effect of ZIKV at a stage notoriously difficult not only to study but especially difficult to perform large-scale or functional studies due to the limited tissue availability and ethical concerns in using human embryos.

Most previous ZIKV studies focused on post-implantation stages, including the human placentas isolated after 7 weeks gestation, while our study focused on the pre- and peri-implantation stage. Combining in vitro hESC-derived trophectoderm like cells, ex vivo human blastocysts, and in vivo mouse studies, we discovered that ZIKV can infect trophectoderm cells of both mouse and human, and can induce trophectoderm cell apoptosis. This peri-implantation infection results in spontaneous abortion and miscarriage, as well as neural progenitor cell death. Previous dogma suggested that spontaneous miscarriage was likely caused by infection and death of fetal cells. Our study suggests that viral infection can cause miscarriage through infection of extraembryonic cells.

The results of this study, published on Nature Communications (https://www.nature.com/articles/s41467-019-12063-2), may have impact on the way clinicians advise women who are trying to conceive regarding travel to ZIKV containing countries. Furthermore, it is tempting to consider that ZIKV infection, especially in countries with high levels of the virus, may have an effect on fertility rates, as pregnancy loss will occur prior to knowledge of the pregnancy. 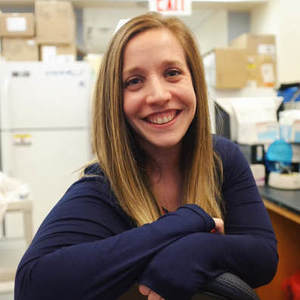