From the NICU to the lab and back

With the science in mind and curious about how what we learn in the lab might impact the care of preterm infants, I had the opportunity to observe grand rounds in the NICU in Saint Louis Children’s Hospital. The first thing I noticed was a room full of equipment and nurses. Then I saw the babies. Fragile human lives, some no bigger than the size of a soda can, alive due to the advances in medical science. Research just met real life.

We often hear about the over-use of antibiotics in agriculture and the clinic with the threatening emergence of antibiotic resistance. However, in no healthcare setting are antibiotics more ubiquitously used than in the neonatal intensive care unit (NICU). Antibiotics are almost universally administered to preterm infants at birth and throughout their stay in the NICU. In our cohort, 98% of premature infants received antibiotics within 24 hours of birth and 61% received subsequent treatments within the first two months.

As it is clear that systemic infections can originate in the gut, there is an outstanding need to understand how these treatments alter antibiotic resistance reservoirs in these microbial communities. Further, while there is mounting evidence that early life events which alter gut microbiota development can have lasting impacts on health, there is surprisingly little known about how antibiotic therapy disrupts this process in preterm infants. Our research attempts to fill in these gaps. 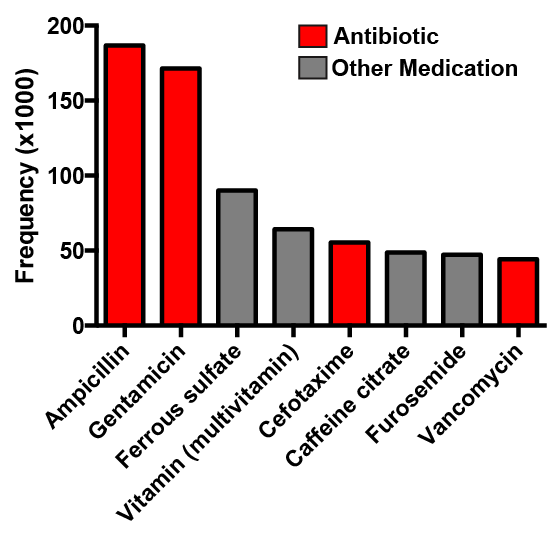 The frequency of medications administered in the NICU. Four out of the top eight medications are antibiotics. Data adapted from Clark et al., 2006 (Pediatrics).

As it has previously been demonstrated that the resistome of cultured microbiomes vastly underestimates that of uncultured microbiomes, we started this study by characterizing the preterm infant gut resistome using functional metagenomic selections. Functional metagenomic selections is a powerful technique for identifying novel resistance genes in uncultured microbiota where metagenomic fragments are randomly ligated into plasmids and transformed into a culturable host, which is then subjected to selection from antibiotics. The fragments that provide resistance are subsequently sequenced. In stark contrast with all previous functional metagenomic selection performed in the Dantas lab, we were surprised to find that the majority of antibiotic resistance genes identified using this method were highly similar to those found in public databases (>95% median identity). 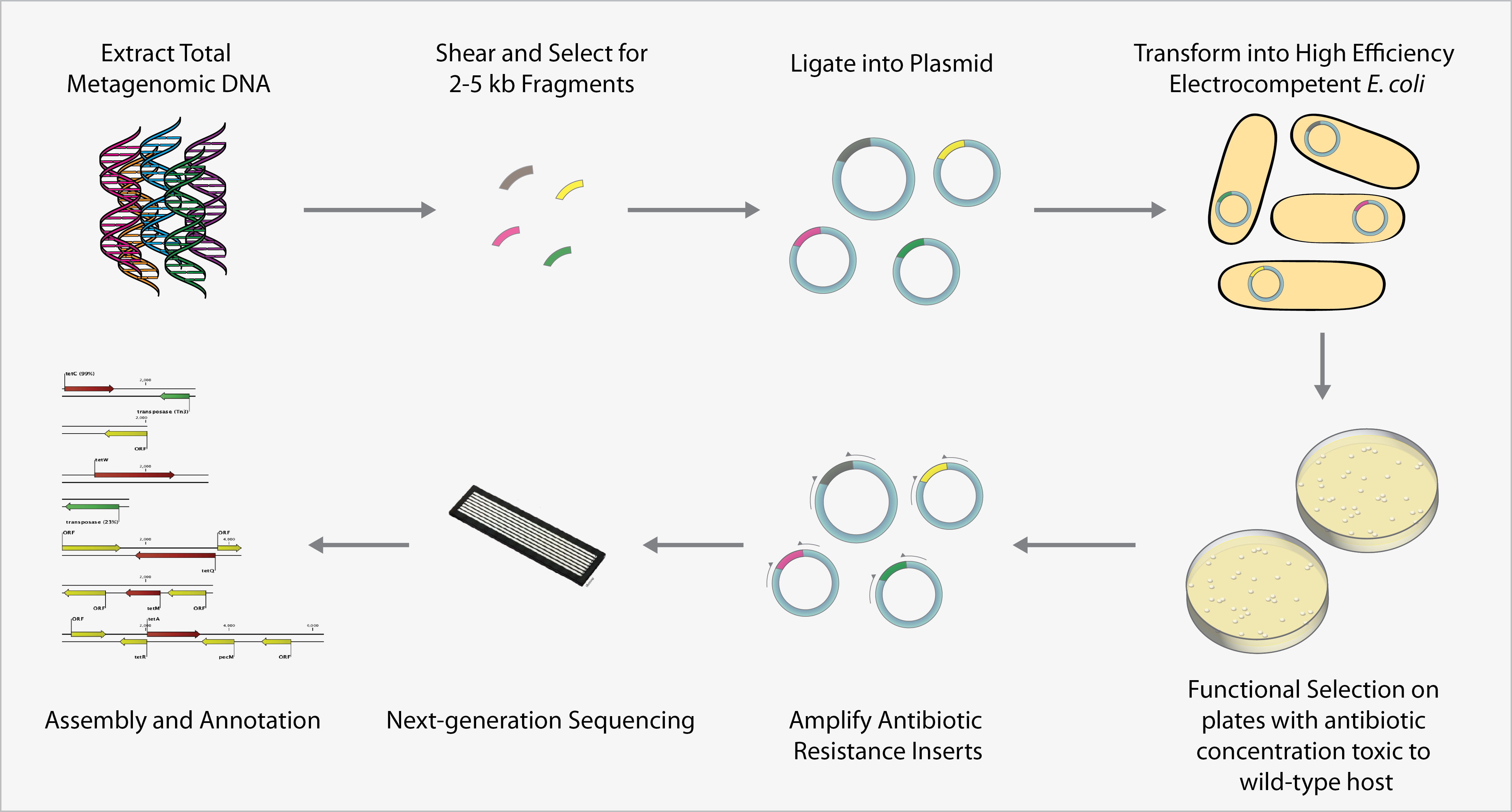 Overview of functional metagenomic selections. Total metagenomic DNA is extracted from a microbial community sample, sheared, and ligated into an expression vector and is subsequently transformed into a suitable library host to create a metagenomic library. The library is then plated on media containing antibiotics inhibitory to the wild-type host to select for metagenomic fragments conferring antibiotic resistance. Metagenomic fragments present in colonies growing on antibiotic selection media are then PCR-amplified and sequenced using either traditional Sanger sequencing or next-generation sequencing methods. Finally, reads are assembled and annotated in order to identify the causative antibiotic resistance genes.

When we dug in further to the origin of these functionally-identified antibiotic resistance genes, we found that the majority of these genes were encoded in close relatives of organisms commonly associated with nosocomial infections, such as Escherichia coli and Klebsiella pneumoniae; however, the majority had not been previously identified as antibiotic resistance genes.

We found that these organisms along with other Proteobacteria, which typically make up less than 1 percent of the bacteria in healthy, older children’s guts, dominated the preterm infant gut microbiota, often making up more than 50-80% of the community. Further, specific antibiotic treatments (meropenem, cefotaxime, and ticarcillin-clavulanate) were associated with a substantial loss in diversity and enriched for individual organisms and antibiotic resistance genes. We used species richness as a surrogate for gut microbiome health and development because loss of gut microbiota diversity has previously been associated with a number of host pathologies.

While we identified a large and diverse resistome encoded in the preterm infant gut microbiota at birth, including a number of multidrug resistance clusters, we were encouraged by the lack of any of the most clinically urgent resistance genes, such as KPC or NDM beta-lactamases.

My visit to the NICU brought to life what I had known; I had been studying the gut microbiota of preterm infants for a while and I knew all the statistics. I knew these babies are born on average 10 weeks too early and about 1/3 the weight of healthy term infants. I knew they often spent the first few weeks to months of their life in the hospital, attached to ventilators and feeding tubes, often receiving an incomprehensible amount of antibiotic therapy. However, it wasn’t until that moment and hearing about the unbelievable roller coaster ride of triumphs and setbacks for the day, both for the infants and especially for their parents, that I was able to really understand these numbers. While I started this post talking about the research, I want to finish it by focusing on the people behind the paper: the infants, parents, and physicians.

Working along side truly exceptional physician scientists, Drs. Barbara Warner, MD, and Phillip Tarr, MD, I was able to further internalize and understand how our research could impact infants in the NICU. Their dedication to this project and to improving the health outcomes of these infants was remarkable. They spent much time thinking deeply about our results and Barb would often assert how our research is already changing the way she and others are thinking about prescribing antibiotics in the NICU. It was clear throughout the entire project that their main focus and priority in every interaction was to find ways to improve clinical outcomes for these babies. 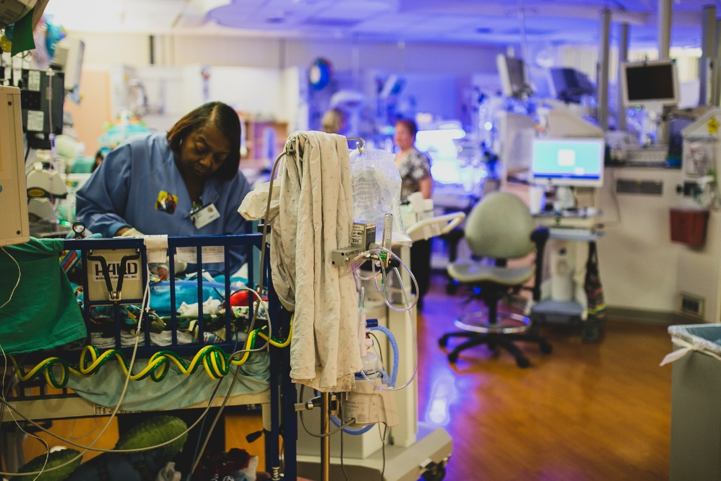 This research was funded in part by the March of Dimes and in support of their efforts, The Dantas Lab participated in the March of Dimes annual 5K walk/run in Saint Louis for the past 3 years. Through these experiences, we were able to not only interact with advocates for babies born too soon but also put a face to survivors and parents of prematurity and give back to the agencies that graciously supported this work. 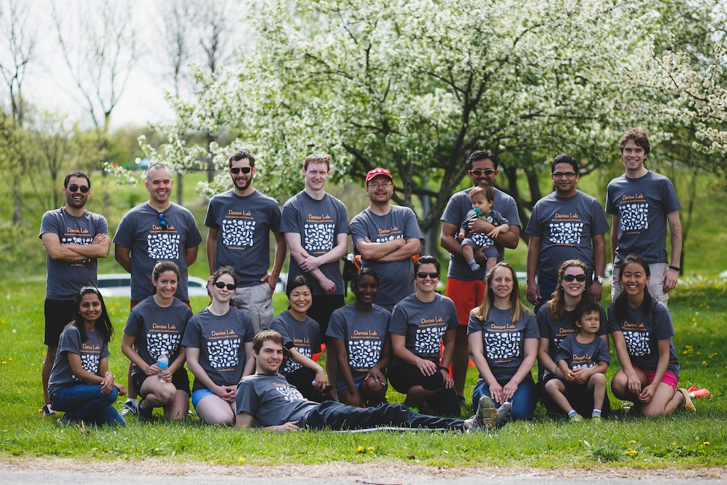 We are hopeful that this research will help to empower clinicians to make more prudent and personalized antibiotic therapies in the future, thereby minimizing collateral damage to the commensal microbiota and improving outcomes for premature infants.

The birds and the bees: Bacterial sex and its implications in spreading antibiotic resistance